CENTER POINT – At a meeting on Thursday night, the Center Point City Council passed a resolution to authorize land acquisition of Hilldale Baptist Church, a subject of discussion at the Oct. 12 meeting where a 2-cent sales tax increase was implemented to finance the purchase. The property will then be re-purposed for the city’s needs. 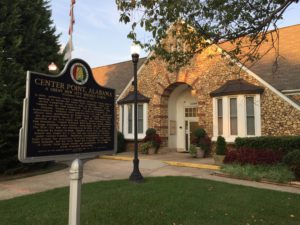 “This is an exciting time,” said Council President Roger Barlow at the beginning of the meeting. “We’ve got a lot of good things going on in the city.”

Though the council approved authorizing Mayor Thomas Henderson to sign a contract with the church’s board of leaders, they were advised by legal counsels to pass a resolution that would acquire the property.

Parks and Recreation Director Amy Green gave her thoughts on the property and said that there are multiple uses for it, including using it as a recreation center. She cited a study that claimed that recreation centers can help reduce crime as they allow young people susceptible to unlawful behavior to engage in alternative activities.

Some of the uses, she said, include sports, health fairs, rental spaces for events and CPR classes, among other activities. Establishing a public library has been under considerable discussion by the council.

After the resolution was passed, the council held a discussion on appointing an underwriter to finance the acquisition. Barlow said that he had been in talks with several banks, including Regions and Wells Fargo but narrowed options down to three, which were INTL FCStone, Piper Jaffray and Stern Brothers. The council heard from representatives from Piper Jaffray and INTL FCStone.

After discussion the council approved Piper Jaffray in a 4-1 vote. Councilor Terry Leesburg was the sole “no” vote.

A library committee was appointed by the council to serve in an advisory role and to estimate the costs of establishing a library. Appointed to the committee were Center Point residents Joyce Ashley and Angie Pace; councilors Bobby Scott and Linda Kennemur; and Jackie Goodwin of the Planning and Zoning Commission.

In his comments, Henderson said that he and others in the city government have met with members of Alabama Communities of Excellence or ACE, which will do a study based on the discussion that was had. ACE is a program that assists in finding grant money for community programs. The council first voted to apply to ACE at a meeting in February. They study could take several weeks to complete.

Henderson also said that he has been in contact with Retail Coach on an ongoing effort by the city to attract more businesses. He said that a list has been made with 15-20 potential businesses to reach out to. Henderson said that he could not give their names yet.

The next Center Point City Council meeting will be held on Nov. 2 with pre-council at 6:45 p.m. followed by the regular meeting at 7 p.m.