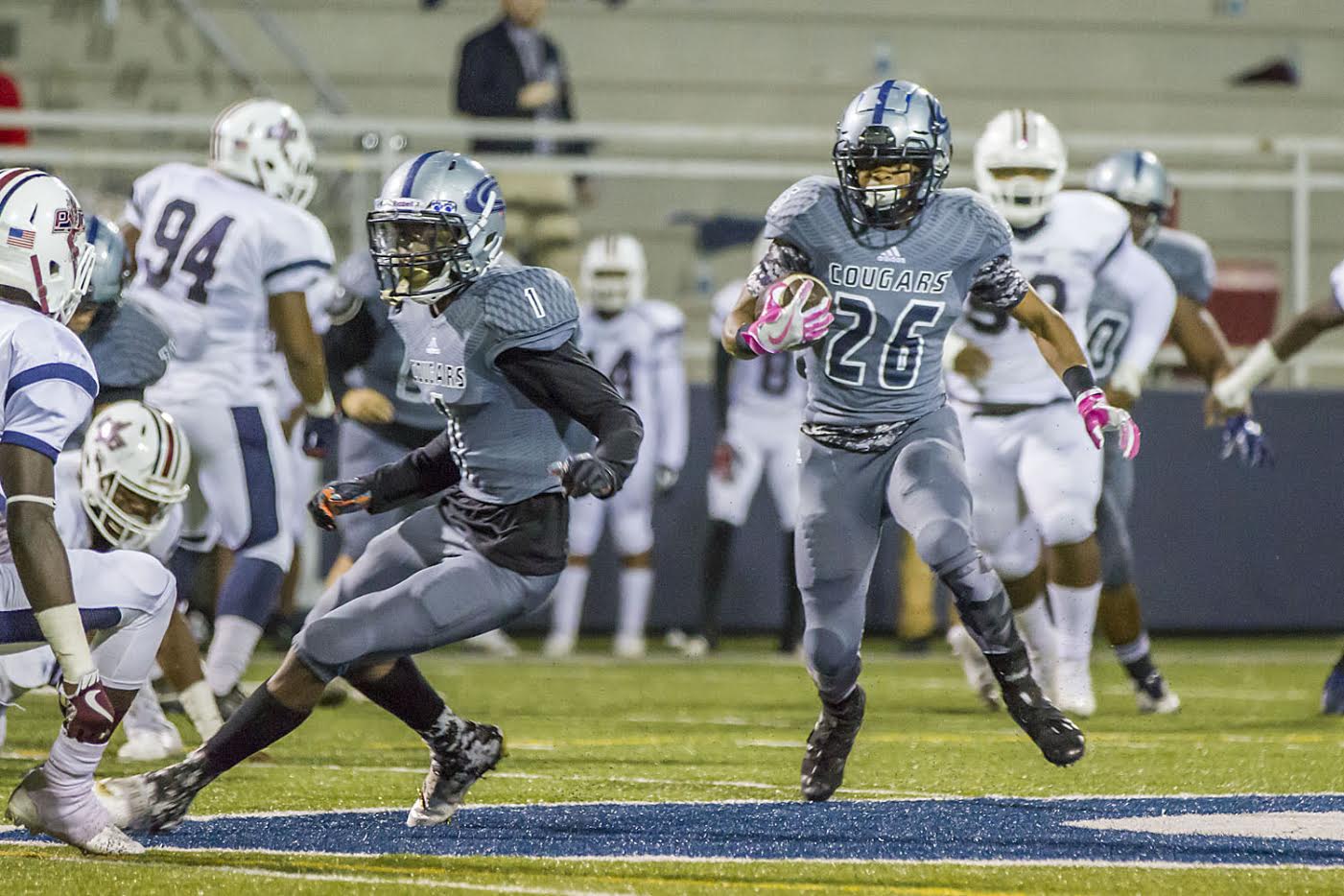 Clay-Chalkville running back Quentin Young makes a carry while receiver Rod McCloud looks to make a block during the Cougars' game against Park Crossing Friday night. Ron Burkett/For the Tribune

CLAY – Park Crossing, ranked No. 8 in Class 6A, showed off its many talented big-play athletes and knocked off No. 7 Clay-Chalkville 30-7 on Jerry Hood Field at Cougar Stadium. 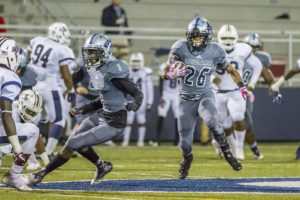 Clay-Chalkville running back Quentin Young makes a carry while receiver Rod McCloud looks to make a block during the Cougars’ game against Park Crossing Friday night.
Ron Burkett/For the Tribune

Despite facing a very good team, Clay-Chalkville coach Drew Gilmer was livid with his team’s performance.

The Thunderbirds from Montgomery (9-1), led by quarterback Cameron Taylor, jumped out to a 10-0 first quarter lead, built it to 17-0 early in the second quarter and scored late in the first half to make it 24-0.

Taylor had a 71-yard run to open the scoring on the T-birds’ first play from scrimmage. Then after a Cougar three-and-out and a punt, Taylor raced 38 yards to the Clay 19. The Cougars defense stiffened and forced a 28-yard field goal by Sebastian Carpenter for a 10-0 PC lead.

The Cougars moved the ball a little bit on the ground but couldn’t break many explosive plays. Drennon Mayhew’s punt pinned Park Crossing at its 3, but Janius Scott, in for a banged-up Taylor, took a bad snap and managed to get loose for 21 yards. Taylor came back in and hurled a pass that should have been intercepted but was tipped into the hands of T-bird Doron Mitchell for a 36-yard TD pass for a 17-0 Park Crossing lead.

Late in the half, Scott got loose for a 44-yard run and later hit Zay’keese Lowery for a 29-yard gain. Jia Langford, a 6-foot-2, 240-pound defensive lineman, crashed in from the 2 with 30 seconds left till halftime for a 24-0 lead.

The Cougars defense did a bit better in the second half, forcing a punt, and Quentin Young broke off a 40-yard run to get the Cougars to the PC 10. But Miller missed on a third-down pass and Jaren Van Winkle missed a 25-yard field goal.

With the running game becoming less effective against the stout Cougar defense, Scott shot four straight passes on the T-birds’ next drive, the payoff was a 16-yard toss to Grant Dubose with 2:33 left in the third quarter for a 30-0 lead.

The Cougars turned it over on downs on the next drive at midfield. Park Crossing drove to the 1 after a 41-yard pass play from Scott to Osborne, but the Cougars held on four downs from the 9, stopping a fourth-and-goal run from inside the 1.

The Cougars then went 99 yards for their only score. The big plays were a pair of Miller-to-Leroy King passes for 11 and 34 yards and a 29-yard hookup with Rod McCloud. Lawson Hinkle ran in from the 15 for the score. Van Winkle added the PAT with 6:04 left for the final tally, the game ending 30-7.

“They’ve got a really good football team,” Grider said. “We got out early and kind of took them out of their game. They’re a very good running football team and they had to throw the ball a little more than they normally do and they just weren’t able to make the plays tonight. They’ve been making them all year. They had some guys open they weren’t able to get the ball to, and we feel fortunate to get out of here with a win.”

Gilmer didn’t pull any punches, and said while Park Crossing is indicative of the type of teams the Cougars may face down the road in the playoffs, the Cougars need to get better.

“That’s what you’re going to see. Maybe we’ve got a misconception of how good we are, but the good thing is we get to go to work on Monday and try to get a little bit better. And in two weeks we get a chance to see Athens here and see what we can do. But we’ve got a lot of work to do.”

The score was a little closer than last year’s 56-17 loss to the Thunderbirds at Cramton Bowl last season.

After an off-week, Clay will host Athens in round one of the 6A playoffs. Athens lost to top-ranked Austin 69-28 Friday.