PINSON — The Pinson Historical Society conducted an Alabama Bicentennial Celebration event on Oct. 28 at Turkey Creek Nature Preserve.  Keeping with the 2017 bicentennial focus on “Discovering Our Places”, the society dedicated a handsome bronze plaque marking the burial sites of John T. and his son David Hanby. 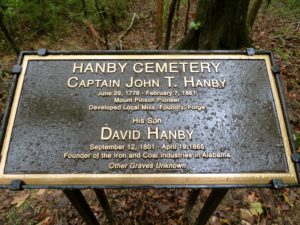 These early Pinson residents are widely recognized as the founders of the iron and coal industries in Alabama. Hanby family descendants from throughout Alabama along with Pinson Historical Society members, Friends of Turkey Creek members and Pinson city officials were in attendance to celebrate this historical occasion.

The Hanbys became the largest employers in Pinson.  In April 1865, Union soldiers murdered David Hanby and destroyed the industrial complex at the falls, thrusting the community into severe economic hardship because of the resulting loss of jobs for soldiers returning from the war.

Recognition of John and David Hanby acknowledges their noteworthy accomplishments and contributions to the community by commemorating a place closely associated with these significant citizens of the past.