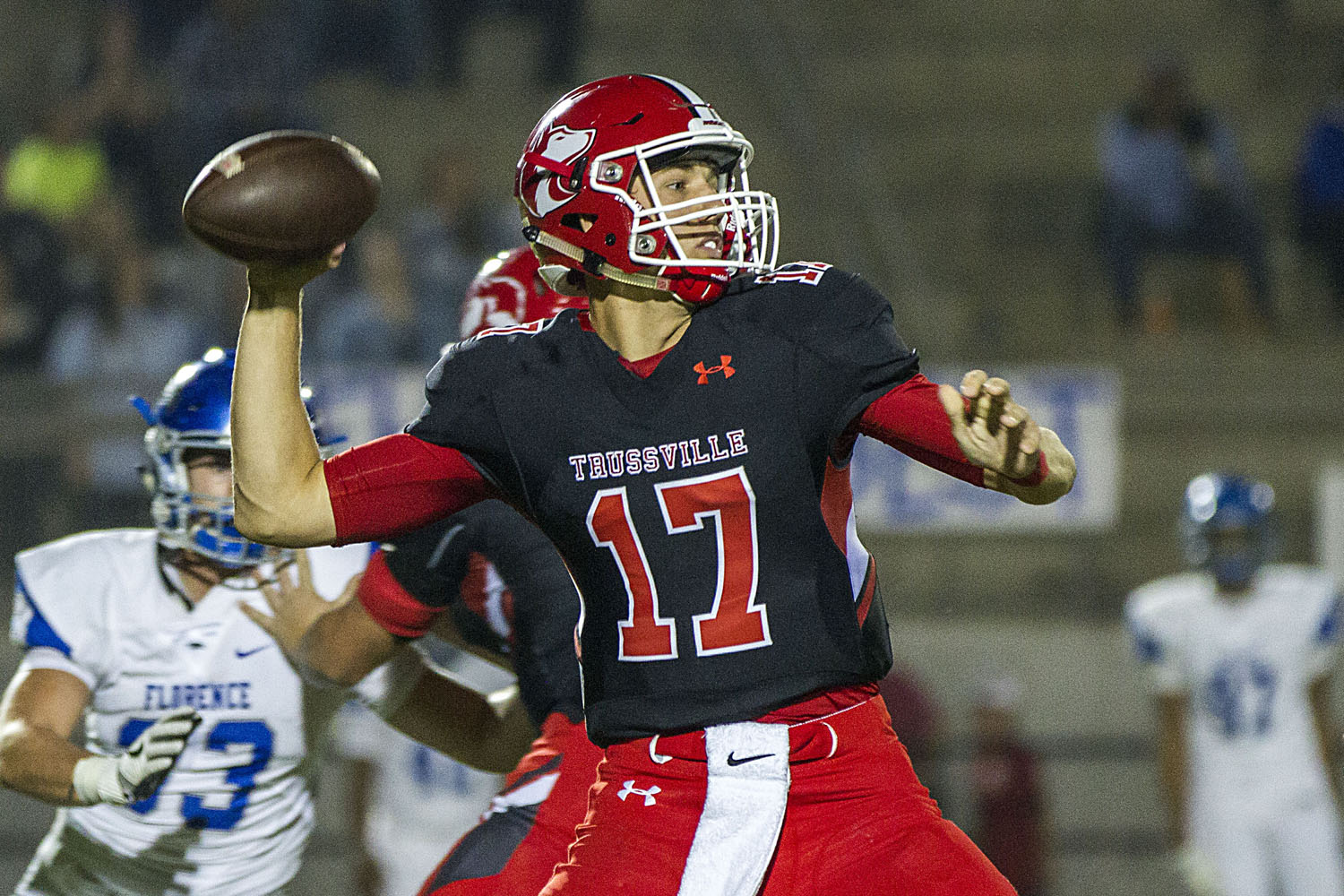 Hewitt-Trussville quarterback Paul Tyson makes a pass during the Huskies' game against Florence. Photo by Ron Burkett / For The Tribune 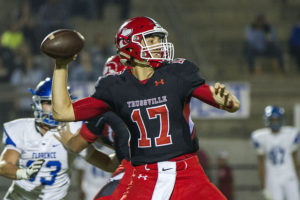 Hewitt-Trussville quarterback Paul Tyson makes a pass during the Huskies’ game against Florence Friday night.
Photo by Ron Burkett / For The Tribune

The Huskies rode the strength and team chemistry of 21 seniors, plus the arm of junior quarterback Paul Tyson, to pull out the historic win before a large crowd at Husky Stadium.

“I am proud of these kids and we found a way to win,” coach Josh Floyd said, although he said he felt overall the team didn’t play very well. Some players were held out to rest up injuries, and he said it was tough already knowing they’d be facing Spain Park in the first round of the playoffs next Friday. “It was tough, but we tried to stay focused.

“We celebrated those 21 seniors tonight, and I think those guys kept everybody calm,” Floyd said.

Senior linebacker Simon Miskelley, the defensive leader, said he really couldn’t have imagined back-to-back perfect regular seasons two years ago. “Three years ago, we probably had better athletes, to be honest, but we’ve  just grown as a team and have so much chemistry, it’s an amazing feeling to do this two years back-to-back.”

6A Florence (4-6) features several excellent athletes, but none better than running back Armoni Goodwin, probably the best freshman running back in the state. Goodwin ripped off scoring runs of 75, 6, 95 and 85 yards and wound up unofficially with a spectacular 370 yards rushing. Three of those scores came in the first half.

Tyson passed for touchdowns to Dazalin Worsham for 11 yards and to Elliott McElwain for 9 in the first half and then a short pass Worsham turned into a 61-yard score early in the fourth quarter for a 45-35 lead that sealed the win.

Trailing 21-14 with 3:07 to go before halftime, the Huskies drove 88 yards in less than two minutes. Tyson passed to McElwain for 17 yards and to Malachi Moore for 13. Cameron Bledsoe ripped off a 29-yard run and Tyson hit McElwain for a 9-yard score to tie the game.

After a three-and-out, the Huskies had the ball on their own 45 and a 42-yard hookup from Tyson to McElwain set up a 35-yard field goal by Parker Colburn at the buzzer to give Hewitt a 24-21 halftime lead.

“The end of the half was key, we flipped the score, there,” Floyd said. “Made a couple of stops and had the momentum going into halftime.”

Florence ate up over half of the third quarter and scored on a pass from Bradley Dorin to Cadarrius Thompson from 8 yards to take a 28-24 lead.

But Tyson hit Logan Pitts for 17 yards, Bledsoe ripped off 15 yards, and McElwain broke loose for a 33-yard TD run with 4:31 remaining in the third quarter for a 31-28 lead.

The Huskies got another stop and McElwain capped a quick 70-yard drive with a 9-yard run out of the wildcat for his third score and a 38-28 lead with 11:56 left.

“Elliott’s a workhorse, he just does his thing every week. He has such great heart, and I’m super proud of him.”

McElwain said, “It’s just huge for me, my senior night year, to go out with a bang. Props to the o-line, they did a super job tonight.”

But two plays later, Tyson hit Worsham with a quick pass in the flat and the sophomore did the rest weaving through the Falcons and then exploding through the secondary for a 61-yard TD that made it 45-35 with 11:06 to go.

“Heck of a play by Dazalin,” Floyd said. “He took that clear across the field. We’re just trying to make first downs. A couple of times you know we almost scored too fast, it’s tough having our defense to be back out on the field.”

The Falcons mounted another drive and had fourth-and-goal at the 6. But George Steele knocked away a certain TD pass to thwart the threat.

“We had our backs against the wall,” Miskelley said. “George was on the opposite side of the field so their wide receiver was wide open and waving for the ball and George got over there and knocked the ball out of his hands.”

“That was a big play by George and for our defense.”

McElwain said the perfect season is great, but “Ten-and-oh doesn’t mean anything to me unless you come away with a ring. Now it’s time for the playoffs.”

That starts next Friday when Spain Park travels to Husky Field for a 7 p.m. kickoff.