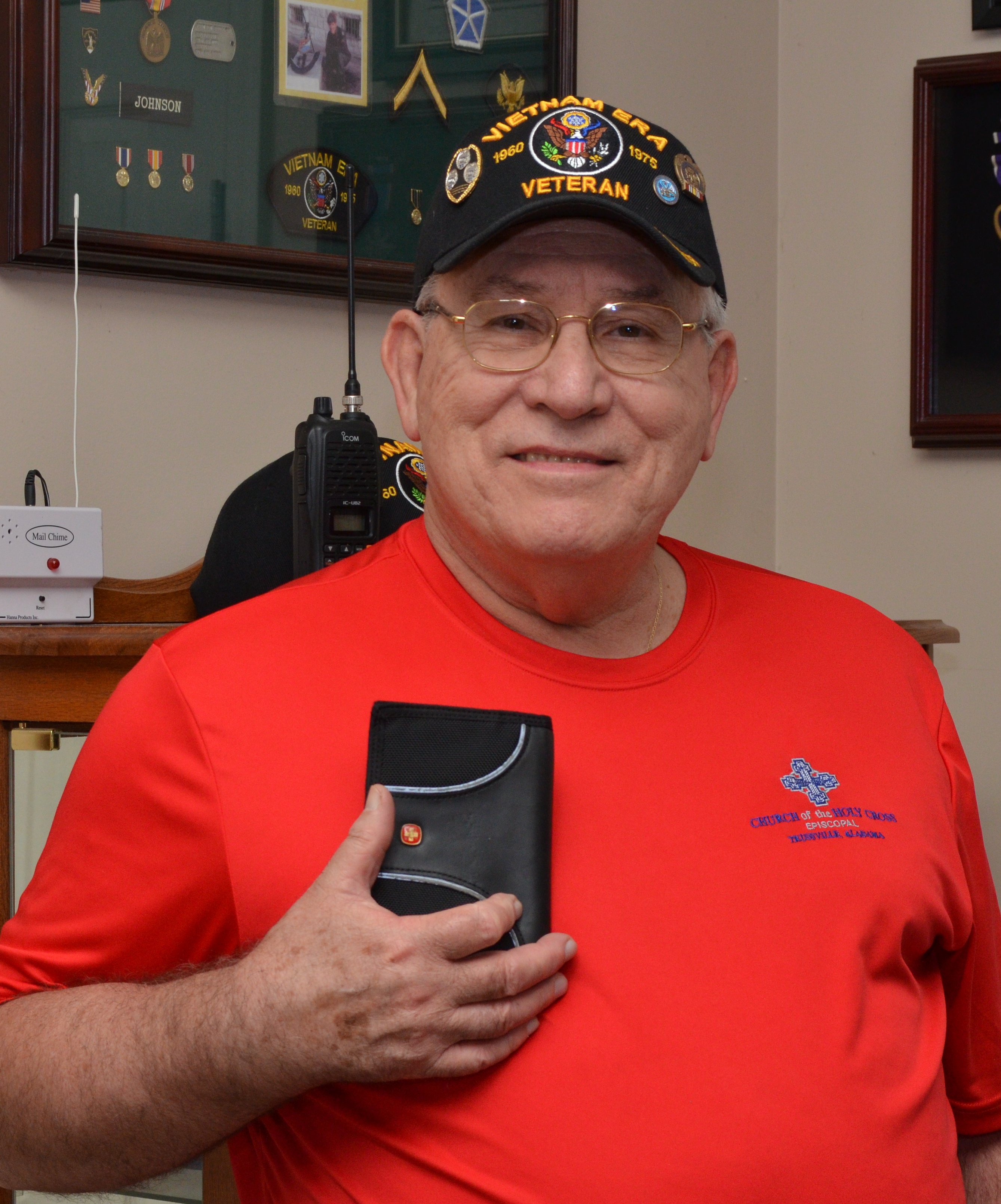 Springville resident Phillip Johnson holds up his wallet after it was found by a local mother and son and returned to him.

TRUSSVILLE — The actions of a local mother and son are being praised across social media Thursday as proof that there are still good people around despite everything going on in the world today. 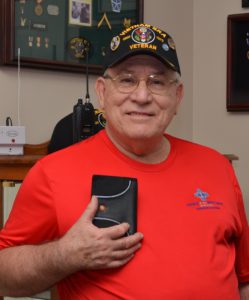 Springville resident Phillip Johnson holds up his wallet after it was found by a local mother and son and returned to him.

It all started when Phillip Johnson, a 71-year-old veteran from Springville, had what he referred to as a “lapse of focus” as he was getting gas at the Circle K/BP on Main Street in Trussville.

Johnson accidentally left his wallet on the roof of his car and then drove off.

“Myself and a friend of mine who is a Marine were on our way to a veterans’ event at a church,” he said. “I discovered my wallet was missing when I went to put on my American Legion regalia. I was going to put my wallet in my coat and found it was missing.

“I did not discover that it was missing until early this morning, a good 12 hours later.”

Johnson served in the United States Army from 1967 through 1970, making him a Vietnam-era veteran.

“The first thing you get asked when people find out you served during Vietnam is did you serve in country,” Johnson said.

“I was in Germany in latter 1967 where they sent me after I finished my training. In June of 1969 I was issued orders that they would send me to Vietnam. My wife was with me in Germany and was pregnant with our first child, so they put my orders on a temporary hold to wait for the birth.

“My first-born daughter suffered a congenital heart defect and died 12 hours after birth.

“They rescinded my orders to go to a combat zone and moved me and my wife to Fort Benning (in Georgia) for the final year of my service. It was an awful price to pay to not go to combat.”

Afterwards Johnson served with the Birmingham Police Department for 16 years until he was injured in a high-speed pursuit and had to take medical disability in October of 1969.

“I was in pursuit of a stolen motorcycle when I ‘t-boned’ a vehicle that did not yield the right of way,” he said.

Now Johnson is a volunteer at Church of the Holy Cross where he helps with the audio/visual side of things.

Johnson had just left a discipleship training class at the church when he stopped at the station to get gas last night. That is when he accidentally left his wallet on top of his car.

“After I discovered it was missing I called BP and asked if anyone had turned it in,” he said. “The lady I talked to said that no one had.

“I prayed as I left the house to go out and search for it. I said ‘Lord, if it be your will, help me or an honest person find it. If not give me (a senior citizen) the strength to go through the ordeal of losing the cash, my personal things and stopping the cards.”

Johnson said he retraced his entire route between Trussville and Springville but could not locate his missing wallet.

What he did not know at the time was that a local mother and son had overheard his conversation with the attendant, Brandi Rowe, at the gas station.

“They come in here all the time,” Rowe said. “They overheard me repeating and confirming (Johnson’s) information.”

The duo then took it upon themselves to go help look for the wallet. They found it in the road a short distance from the station on Main Street in the direction of Springville.

Rowe told Johnson that the young man, a teenager of 15 or 16 believed to be a local student, excitedly told his mother “there is that man’s wallet.”

The mother and son then handed the wallet over to Rowe.

“They helped us find it,” Rowe said. “They didn’t have to do that. The manager and I went through the wallet to find the owner’s information. I called him to tell him we had it, and he was so excited and thankful.”

Rowe said that this is not the first time a good Samaritan has turned in a lost item to the station.

“Since I have been here the last two years a lot of people who have found stuff have turned it in,” she said. “It proves there are a lot of honest people here in Trussville.”

Johnson got the call from Rowe that his wallet had been found right as he pulled back into his garage from his own search this morning.

“That was no coincidence,” Johnson said. “That was the Holy Spirit at work.

“I know it’s so hard to express your beliefs publicly sometimes, but this is a 100-percent bona-fide ironclad 100-percent karat gold example of faith being rewarded.”

Johnson then returned to the gas station, where Rowe handed over his wallet to him.

“Everything was in it, including a lot of water,” he said. “It got rained on and run over all night. No one had picked it up in 12 hours.”

Johnson hopes that he can learn who the mother and son are in order to express his gratitude for turning in his wallet.

“My deepest gratitude is extended to this mother and son who took it upon themselves to help out an old man (71) who is a veteran and retired law enforcement,” Johnson said in a post to the What’s Happening in Trussville Facebook page. “My Christian beliefs strongly support that this was no coincidence that the mother and son were in position to hear the conversation and help out.

“I hope you read this…….to the mother, thank you for teaching your son about honesty and integrity……..to the son, you are building a foundation that will serve you well in life. May God’s blessing and peace be with you.”