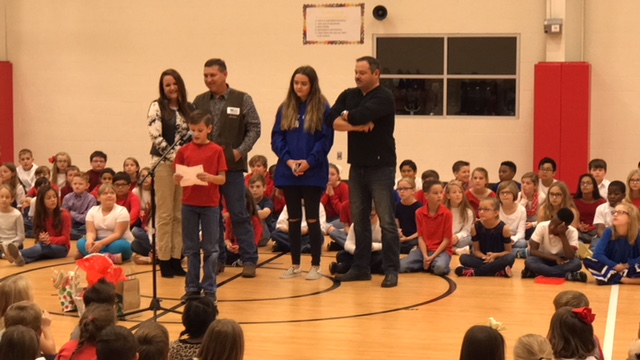 TRUSSVILLE — Fifth-grade student Mason Parlier had some words to share with his classmates during a Veterans Day program Thursday about his brother Mitchell, a recent graduate of Hewitt-Trussville. 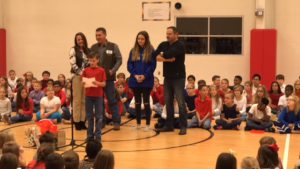 “I’m so proud that you are taking time out of your life to serve our country,” says Parlier. “P.S. You better get here soon or I’ll be taller than you.”

Parlier’s letter to his brother was something he wanted to do to honor him during Magnolia Elementary’s annual Veterans Day ceremony honoring local veterans on Thursday. What Mason and family didn’t expect was what followed – a special gift of handmade Christmas ornaments for Mitchell’s tree.

When Parlier’s family heard the school’s plans to honor our veterans and active duty military, they responded immediately.

“We wanted to share this tribute with my oldest son, PFC Mitchell Parlier, who was deployed to Iraq in August,” says Amy Moore, mother of Mason and Mitchell.

“I met with Dr. Jeter and offered to speak to students about the importance of honoring our soldiers and how their deployment affects and benefits not only the families, but every citizen of our great country,” says Moore.

“We originally offered to supply crafts and paper for the students to write letters and make crafts to send overseas, but Dr. Jeter took the suggestion and ran with the idea.”

Dr. Autumm Jeter, Principal of Magnolia Elementary School, says that after Moore contacted her some teachers shared some of their ideas to make it special for everyone.

“Our kindergarten, first and second grade students created the ornaments that we presented,” says Dr. Jeter, “And Mr. Byars, our music teacher came up with the idea of professionally videotaping the performance so their son can see the program in his honor.”

“As a daughter, grand-daughter, sister, cousin, and now mom of a soldier, the gratitude of lives given in service to the United States of America and the values we stand for has never been more heart-felt,” says Moore. “We have God Almighty to thank for our lives, but our veterans to thank for our freedoms.

“We witnessed Thursday such beautiful evidence of the patriotism, honor, and love displayed by the principal, teachers, staff, PTO, students and parents of Magnolia Elementary and this amazing city of Trussville we call home.”

Students and parents at Magnolia Elementary gathered for a Veterans Day celebration to honor our veterans and active duty military with songs of patriotism to show respect to those who served in the armed forces. The ceremony was led by Performing Arts teacher Chris Byars.

During the performance around 130 students in the fourth and fifth grade chorus sang recognition to all servicemen and servicewomen in the audience by performing the armed service songs from each military branch: “Anchors Away” for the U.S. Navy, “The Caissons Go Rolling” for the U.S. Army, “The Wild Blue Yonder” for the U.S. Air Force, “The Marine’s Hymn” for the U.S. Marines, and “Semper Paratus” for the U.S. Coast Guard.

A reception, sponsored by the Magnolia Elementary PTO and Hendrick Landscaping Service, followed the performance.