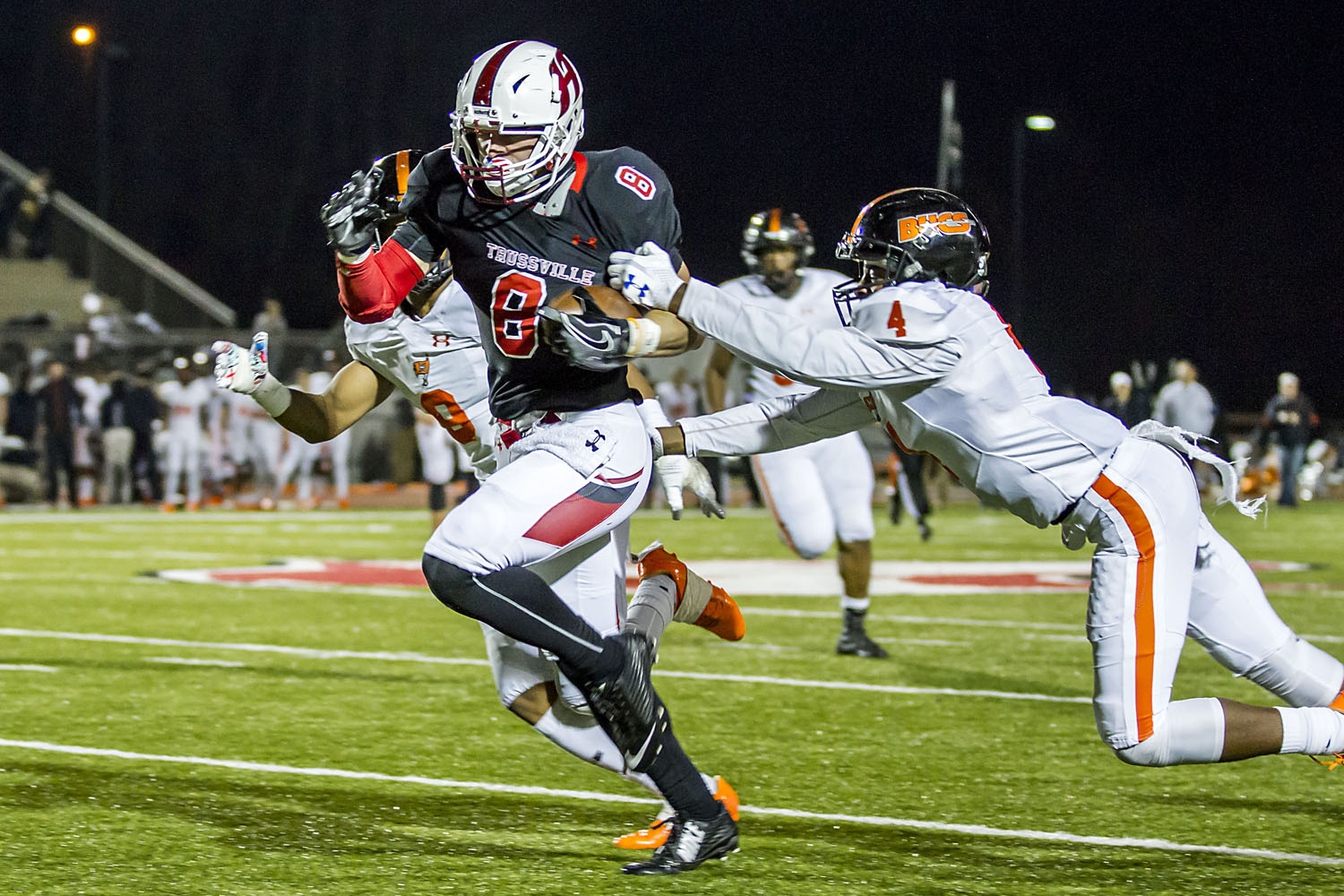 Hewitt-Trussville's Elliott McElwain runs down the field as a Bucs defender tries to tackle him during Friday night's contest. Photo by Ron Burkett / For The Tribune

TRUSSVILLE – Empty trips to the red zone. A fumble on the goal line. An interception deep in their own territory. A dropped pass in the end zone. 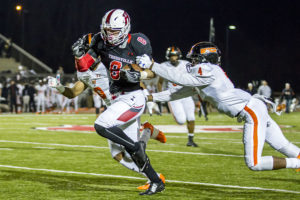 Hewitt-Trussville’s Elliott McElwain runs down the field as a Bucs defender tries to tackle him during Friday night’s contest.
Photo by Ron Burkett / For The Tribune

Maybe all of that, had it gone the other way, wouldn’t have made a difference, anyway.

But Hewitt-Trussville head coach Josh Floyd would have liked to have seen what might have been Friday night at Husky Field, where his Huskies (11-1) dropped a 56-21 decision to Hoover (8-3) in the quarterfinals of the Class 7A state football playoffs.

“I just wish we would have played well,” Floyd said. “We made a lot of mistakes we haven’t made the entire season. Give Hoover credit. They outplayed us tonight. They’re a great team. It’s why they are who they are.

“We didn’t play well anywhere, really. Not trying to take anything away from them. I’d just like to have seen what would’ve happened if we’d played well.

Things didn’t start well for the Huskies. The first offensive snap was an illegal procedure, the next play was a bad snap and a sack. After two incomplete passes, the Huskies punted.

“We jacked up the first three plays,” Floyd said. “We didn’t do one thing right. That’s frustrating because you know it’s going to be a tough game.”

It took Hover one play from scrimmage. Jalen Parker hit Shedrick Jackson in stride as the Hewitt defender slipped down for a 49-yard touchdown pass. Tyler Antkowiak blocked the PAT, but it was 6-0 Bucs just 1:05 into the game.

Hewitt drove the ball to the Hoover 10, with a 27-yard pass from Paul Tyson to Logan Pitts moving the chains. But on fourth-and-1 at the 10, Tyson’s pass was incomplete to Pitts.

Hoover went 90 yards in seven plays. Larry McCammon had a 22-yard run to start it, and Parker hit George Pickens for 16. Two plays later, Parker hit Pickens for a 23-yard TD. The PAT by Barret Pickering made it 13-0 with 2:27 in the quarter.

“We dug ourselves a hole in the first quarter, and we were playing from behind all night long.” Floyd said.

Hewitt picked up one first down, but was forced to punt. Pickens returned the punt 28 yards to the Hoover 48, and Vonte Brackett burst 28 yards to the Husky 29. Parker hit Jackson for 15 yards as the Bucs quarterback made good use of his two Auburn commitments at wide receiver. Parker finished the drive with a 1-yard run, and Hoover led 20-0 with 10:29 before half.

After a swap of possessions, the Huskies got on the board. Tyson hit Elliott McElwain for 34 yards on a screen and then dropped it off to him for another 18 yards to the 2. Tyson hit Pitts on fourth down with a bullet for a score, and Parker Colburn’s PAT cut the margin to 20-7.

Hewitt held Hoover after the kickoff, and the Huskies grabbed the momentum just before half. Starting at their own 13, Tyson hit Dazalin Worsham for a 24-yard gainer.

On the final play of the half, Tyson hit Worsham on a slant and the explosive sophomore bolted away from the Bucs secondary for a 72-yard score as the clock hit zero. Colburn hit the PAT to make it 20-14 as the Huskies whooped and hollered into the locker room.

“I thought we were in a good spot, obviously, that’s what we told our kids at halftime, they were excited,” Floyd said.

But Hewitt kicked off out of bounds to start the second half, and Hoover regained control with a 65-yard drive. Parker hit McCammon for a 24-yard gainer on fourth-and-4, and two plays later McCammon scored from the 7. The Pickering PAT made it 27-14.

“You get that stop on fourth down,” Floyd said, “and it’s a different third quarter.”

After a three-and-out for Hewitt, Brackett blasted through the defense for a 61-yard touchdown run and a 34-14 lead with 8:00 left in the third.

The Huskies managed a short drive, but Tyson was sacked on fourth down near midfield. Brackett rushed for 16, caught a toss for 28 and finished it with a 5-yard run. Jackson ran in a two-point conversion and it was 42-14 with 4:29 left in the third.

On the next possession, Tyson’s pass was ripped away from a receiver by Adrian Hill, who ran it back from the 15 to the Hewitt-Trussville 3. Three plays later, Parker sneaked in for a 49-14 lead with 3:35 in the third.

Hewitt didn’t quit, and Tyson hit Pitts for 17, McElwain for 28 and 11 sandwiched around an 11-yard run by the Army commitment.

Hoover drove again but missed a field goal, and the Huskies marched down the field again.

Tyson hit Pitts for 17, McElwain had an 11-yard run, and Tyson hit Pitts again for 17 yards to the 6. McElwain bulled down to the 2, but Tyson, fighting for the end zone lost the ball and Hoover recovered at the 1.

The Huskies had one more drive left, moving from their 20 to the Hoover 18, but a fourth down throw from Tyson to McElwain in the end zone was tipped out of his hands.

Hoover then ran out the clock.

The Bucs will face Thompson next week in the semifinals, a rematch with a Warriors team that beat them in the regular season.

“We felt like we had a pretty good team, too,” Bucs coach Josh Niblett said. “We played a pretty tough schedule. We’re battle-tested. Our kids rose to the occasion, kids bounced back like we thought they would.

“But we’ll learn from this and go forward.”