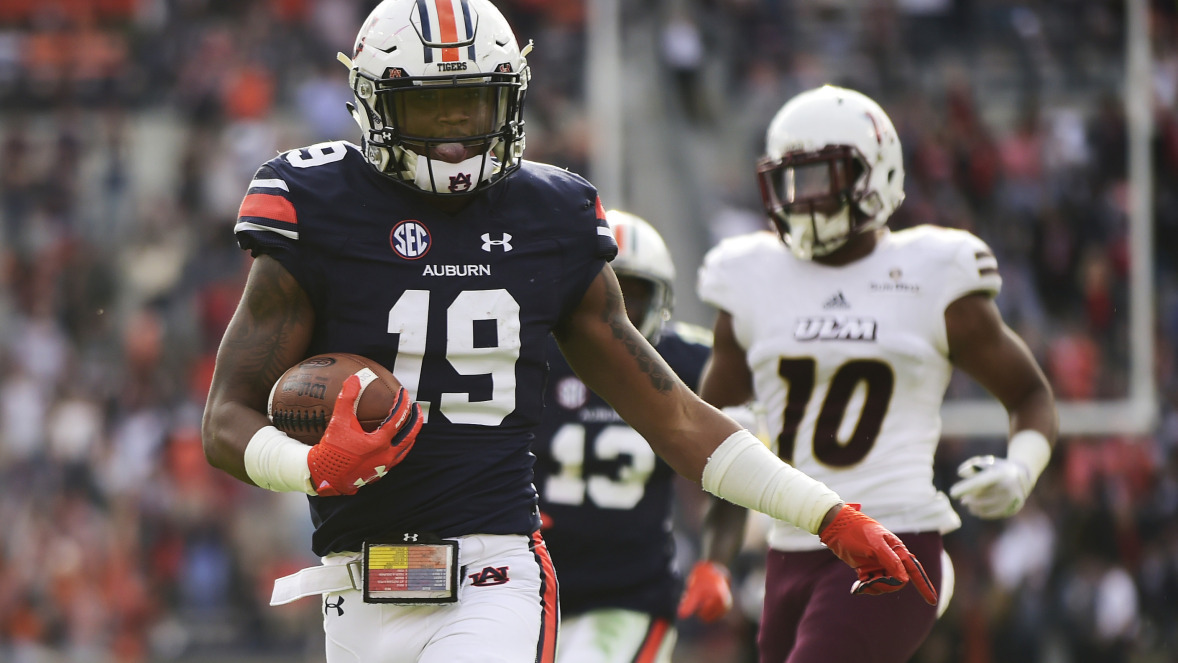 Auburn defensive back Nick Ruffin (19) returns an interception for a touchdown in the second half. University Louisiana Monroe ULM at Auburn on Saturday, Nov. 18, 2017 in Auburn, Ala. Todd Van Emst/AU Athletics 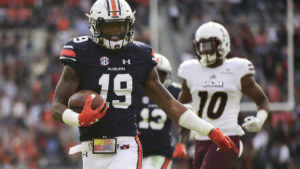 Auburn defensive back Nick Ruffin (19) returns an interception for a touchdown in the second half.
University Louisiana Monroe ULM at Auburn on Saturday, Nov. 18, 2017 in Auburn, Ala.
Todd Van Emst/AU Athletics

After a ULM punt pinned Auburn at its 4-yard-line with 2:01 remaining in the first half, Kerryon Johnson gained 15 yards to AU’s 19.

Jarrett Stidham hit Darius Slayton for 13 yards to the 33, then Stidham found Will Hastings for 17 yards to midfield.

Those three plays served as the opening act for the headliner, Stidham’s 50-yard touchdown pass to a leaping Slayton.

Just like that, a 7-7 game swung in Auburn’s favor for good.

“We wanted to put the ball in the end zone before the half,” said Stidham, who completed 18 of 24 passes for 235 yards and two touchdowns. “It was a little bit of our two-minute drill. Darius and Will did a great job of getting open and the offensive line did a great job protecting, and I was just trying to get the ball to those guys.”

For Slayton, it was his fourth straight game with a TD catch, No. 5 on the season.

“They were kind of playing me slow so I felt like I could get by them,” Slayton said. “Like always, Jarrett was able to get me a good ball, and I was able to go up and get it.

“I think it gave us some momentum. It gave us some rhythm. It even helps get our running game going when our offense is flowing like that.”

That Slayton was open came as no surprise to his quarterback.

“Darius is really fast,” said Stidham. “He can usually run by people. I was just trying to give him a shot. Throw it up to him, let him go high point it and make a catch.

Auburn added to that momentum in the second half, scoring three touchdowns to extend its lead to 35-7 before ULM scored again.

Now comes the Iron Bowl, with the SEC Western division title and a trip to Atlanta on the line.

“I’m excited,” Stidham said. “This is why you play here at Auburn, for games like this against a team like Alabama. They’re a very good team and we’re going to have to play our best ball to beat them. It’s going to be a lot of fun.”

“It’s going to be a crazy atmosphere,” said Johnson, who logged his seventh 100-yard rushing game of the season and has scored 18 touchdowns. “This should be one for the ages. We’ve got to protect the ball, we’ve got to limit our penalties, we’ve got to execute, and I’m confident we’ll come out on top if we do that.”