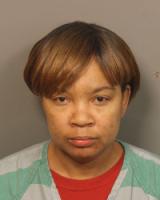 BIRMINGHAM — The Birmingham Police Department has arrested and charged a woman for allegedly committing a homicide that occurred Monday, Nov. 13, in the 1300 block of 17th Street Southwest, according to Lt. Sean Edwards with BPD.

BPD arrested and charged Katawsha Lavonne Strong, 40, with Murder for the death of Larry Sanders, 56. The defendant is currently in the Jefferson County Jail. Her bond has been set at $75,000.

Sanders was found sitting in a chair in his bedroom with what appeared to be a gunshot wound by a relative who went to check on him when his employer phoned to say Sanders had not shown up for work.

Officers from the West Precinct responded around 9:15 am on a nonresponsive person at the location. Officers arrived and met the victim’s brother, who stated he was alerted that his brother was not at work that day, and stated he went to the location for a welfare check.

The victim’s brother stated that when he entered the victim’s bedroom, he observed that his brother was non responsive sitting in a chair.

Birmingham Fire and Rescue responded to the scene and discovered what appeared to be a gunshot wound to the victim’s chest. It appeared that while the victim was sitting in the chair, an unknown suspect fired a handgun at the victim, striking the victim in the chest. A motive has not been established at this time.