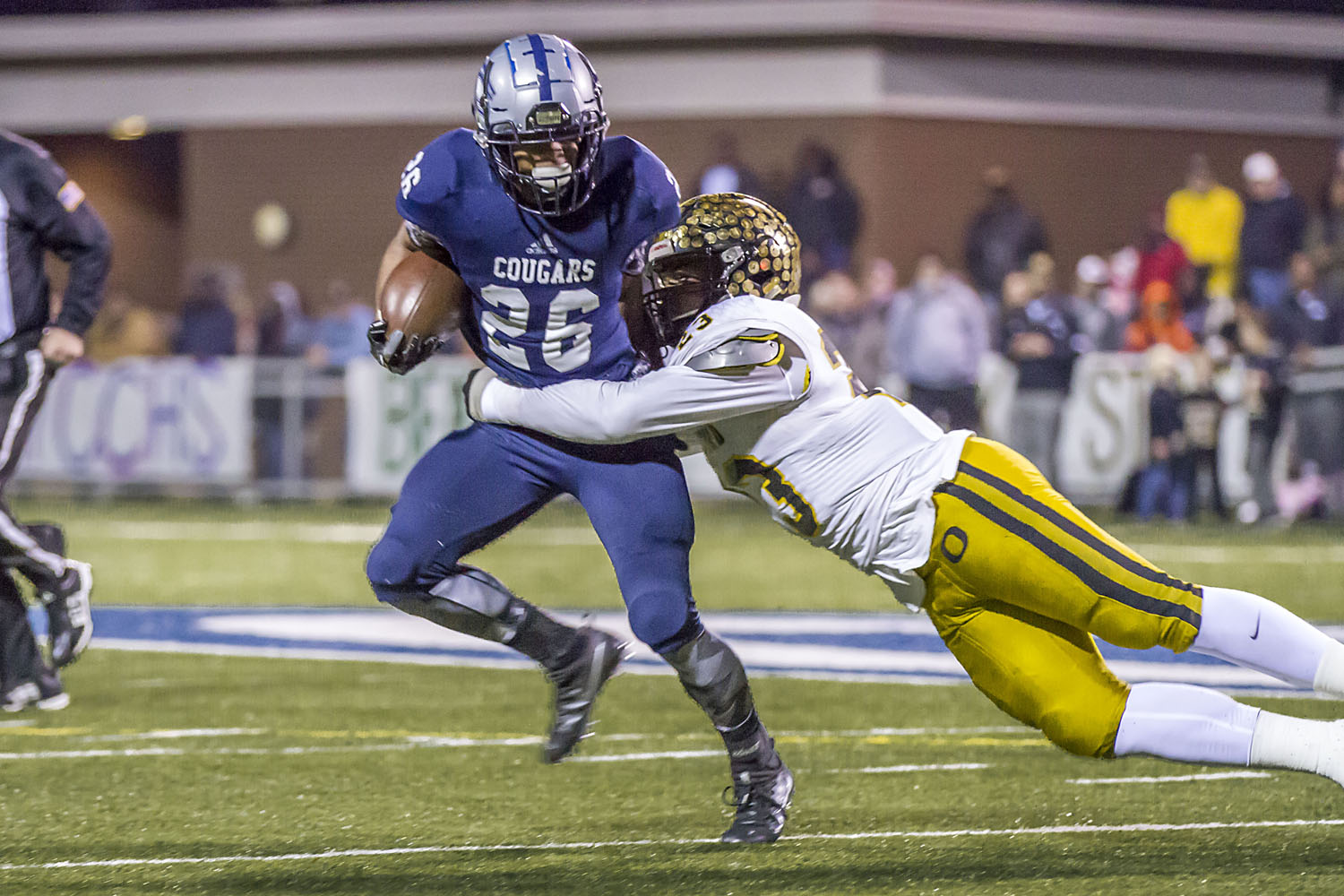 Clay-Chalkville running back Quentin Young makes a carry against Oxford during Friday's contest. Photo by Ron Burkett / For The Tribune

CLAY — It’s great to be good. It’s even better to get a little bit lucky sometimes. 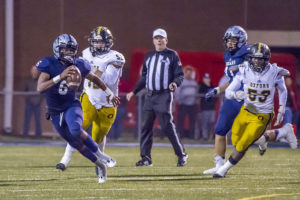 Clay-Chalkville benefited from both in stunning previously-unbeaten Oxford 31-15 in the Class 6A state quarterfinals Friday night on Jerry Hood Field inside Cougar Stadium.

But mostly what the Cougars had going for them was good – a fierce running game, a strong-armed Willie Miller and a corps of big-play receivers and, maybe most of all, a suffocating defense that never let Oxford’s vaunted running game find its footing.

D.J. Dale, Corey Lee, Derrick Bean, Jaylin Mack and others put a pounding on Tyetus Smith-Lindsey, Gabe Webb and quarterback Abe Peoples time after time. Peoples had little time to throw, and when he did Cougars defenders were batting the ball away.

“I thought we did a really good job stopping their running game,” said Clay-Chalkville head coach Drew Gilmer. “We knew that’s what they wanted to do. Line up with two tight ends and two backs and run the football, and our defense did a good job of maintaining their gap integrity and winning their battle. And they did a good job of that all night.”

Mack had a big pick early in the game that set up the first score of the contest. He picked off Peoples near midfield, and behind the hard running of Quentin Young and Curtis Blakely the Cougars moved in into the red zone. Young slithered in from 10 yards out to put Clay up 7-0 after Jaren Van Winkel’s PAT with 1:46 in the first quarter.

Clay’s defense, which has posted a school-record five shutouts this season, kept its throat on the Oxford running game. They forced a punt and took over at their 48. Blakely ripped off 11 yards and caught a screen for 13 yards on third-and 14. On fourth-and-1 at the Oxford 28, Blakely smashed through for 5 yards and a first down.

That drive resulted in a 35-yard field goal by Drennon Mayhew to stretch the lead to 10-0 with 5:17 left till halftime.

Oxford couldn’t manage a first down, and Clay took over after a short punt at its 42 with a couple of minutes left in the half. Miller limbered up his right arm and hit Allen Williams for 9, then handed off to Blakely for an 18-yard charge down to the Oxford 22. Miller hit Williams for 8 more and then found Terrill Cole in the end zone for a 14-yard score and a 17-0 lead with 9 seconds till halftime.

Mayhew tried to pooch the kickoff, but the Cougars caught a break when Oxford didn’t field the ball and Andru Ransaw recovered. With 2 seconds left, Miller took a shot deep and Cole outjumped the defenders for the 56-yard score with no time on the clock. Van Winkle’s PAT gave Clay a 24-0 lead and sent the Cougars bouncing and hooting with joy to the locker room.

“It wasn’t meant to be an onside kick,” Gilmer said with a laugh. “We wanted to squib it and put it on the ground so (Smith-Lindsey) couldn’t run it back.

“And then we knew we were going to take a shot at the end zone, and Willie made a great throw and Terrill came down with it.”

Said Miller, “I saw Terrill – he’s our jump-ball man – and he made a great play.

“I felt good all night. My receivers made some great plays, helped me out – Allen Williams, Rod McCloud, Terrill Cole. We can run the ball, but we can throw the ball too.

“And our defense really helped us out.”

The Oxford fans, a strong contingent filling the visitors stands, were simply shocked. The unbeaten Yellow Jackets came into the game allowing just 5.3 points per game. They’d not allowed more than 14 in any game, and had racked up 10 games in which they’d allowed a touchdown or less.

A personal foul on the last play of the first half forced the Cougars to kick from their 25, and Oxford made Clay pay. Peoples hooked up with Dave Russell for a 25-yard TD pass, and the extra point cut the margin to 24-7.

Clay managed a short drive, but had to punt. Mayhew placed a perfect kick that rolled down to the Oxford 2. Two plays later, the ball squirted free and Mack scooped it up and took it into the end zone. Those were Clay’s final points of the game, but it seemed to take the life out of the Jackets.

“We knew they were going to come out and run the football, and we were ready for it,” Mack said.

On the fumble, Mack said he heard the crowd screaming and looked down and saw the ball. Seconds later, he was in the end zone being mobbed by his defensive teammates.

“Our defense has been playing great all season,” Mack said. “We’re ready for whoever is next.”

Oxford managed one more score, an 8-yard run by Smith-Lindsey with 8:59 to play. A trick two-point conversion worked to cut the lead to 31-15, but the Cougars defense clamped down the rest of the way.

“We didn’t execute as well in the second half, to be honest,” Gilmer said. “It’s kind of a mix of we’re trying to still run the ball and control the clock, and they’re loading the box. But we’ve got to do a little better job there, sort some things out.

“But the kids did a good job, they kept fighting, they held on to the football and we’re thankful to get the win. But we’ve still got work to do.”

That work starts with unbeaten Pinson Valley, a winner over Austin, in a rematch of the regular season at Willie Adams next Friday. Pinson squeezed out a 34-32 win over Clay-Chalkville early in the season.