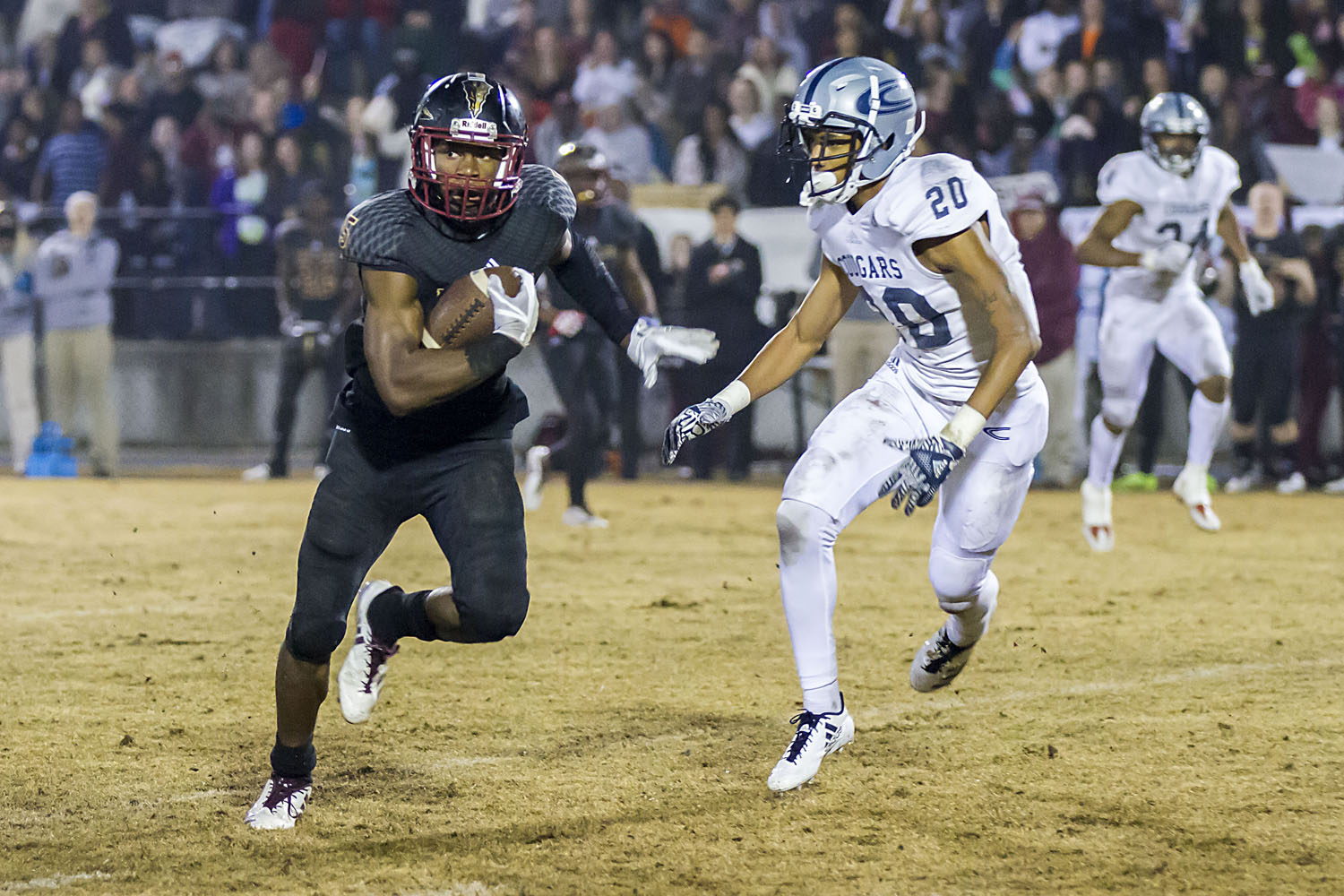 Pinson Valley's Orion Morris run with the ball after a catch while Clay-Chalkville's Andru Ransaw tries to make a tackle during Friday night's semifinal contest. Photo by Ron Burkett / For The Tribune

PINSON — The drumbeats rolled through the Valley on Friday night. 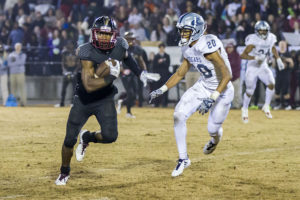 Pinson Valley’s Orion Morris run with the ball after a catch while Clay-Chalkville’s Andru Ransaw tries to make a tackle during Friday night’s semifinal contest.
Photo by Ron Burkett / For The Tribune

Whether it was the beat of cleats of the Indians’ band of special team speedsters, or the thud of the pads of their powerful and purpose-driven defenders, it sounded clear and strong and with one message.

Pinson Valley rolled to a unquestioned and unqualified win against their archrival Clay-Chalkville in the Class 6A state semifinals, 37-7. The Indians of Patrick Nix improve to a school-record 14-0 mark and the school’s first state championship berth in its 48th season.

Clay-Chalkville (11-3) had no answer, ending its stout run into the postseason in Drew Gilmer’s first season as head coach of the Cougars.

But Nix’s message after the game was also clear as those drums.

Bo Nix is usually the star among a galaxy of playmakers for his father’s team. And Nix did strike for three touchdown passes.

But it was the playmaking of special teams, especially Dilan Henderson and Orion Morris, and a defense that completely quashed a Clay offense that was averaging 33 points a game that took the night’s starring bow.

“Our defense played incredible, and played very good on special teams,” Nix said. “Offense, against a defense like that, it’s not always going to be pretty, but we found a way to put up 37 points. I’m very proud of our kids, very proud of their effort, very proud of how they played.”

And it was tight, with the Indians holding just a 10-7 lead at half.

But Pinson kept at it, and Clay could never generate any real offense, especially on the ground. Without running back Curtis Blakely to complement Quentin Young, the Cougars were left with quarterback Willie Miller, and he didn’t get much help from his teammates on this night.

The tone was set early.

Clay-Chalkville won the coin toss and deferred. Henderson took the kickoff at about his 19 and carried it inside the Cougars 20. A facemask foul on the play set Pinson up at the 14. The Cougars defense held Nix out of the end zone, so Aidan Campbell booted a 27-yard field goal with 9:54 remaining in the first quarter.

After a short Clay punt, Pinson was set up on the 50 and drove to the 20. On fourth-and-4, Nix completed a pass to Morris, but JaMarlin Sewell stuck him with a tackle that left him short, and the Cougars took over on downs.

Miller hit Courtney Braxton for a nice pickup then found Terrill Cole for a 41-yard pickup to the PV 9. On a second-and-15, Miller dumped a screen to Leroy King, who chugged 17 yards into the end zone. Drennon Mayhew gave Clay its only lead of the game at 7-3 with 3:21 left in the half.

But Clay kicked the ball short, and the Indians started at the Cougar 46 and made fast work. In five plays, Nix passed to LiAllen Dailey for 14, Henderson for 17, Morris for 5 and after an incompletion, a 10-yarder to Morris for the score. Campbell’s point after made it 10-7, and that was the halftime score.

The Cougars took the second-half kick but went three-and-out. The Cougars’ defense rose to the occasion, stopping a fourth-and-1 dive by Khymel Chaverst at midfield to take over on downs, but another three-and-out saw the Cougars punting again. Morris brought the kick back 58 yards to the Clay 17.  On the next snap, Nix found Henderson for a quick strike and a 17-7 lead with 6:59 left in the third quarter.

Clay tried to answer, but Pinson’s defense, which surrendered 50 to Austin last week, was back to its salty self. It held, and Pinson put together a 64-yard drive that sealed the game. Nix hit Jay Sharp and Morris in the series, but Chaverst took it 22 yards home for the score with 1:05 left in the third quarter.

Nix added a scoring toss to Christian Hopkins and Chaverst tacked on a 38-yard bolt with 2:14 to play for the final margin.

“The defense and special teams set us up with some good opportunities,” Nix said. “It wasn’t just the offense.”

Cougars coach Drew Gilmer was disappointed in his team’s performance. “We just didn’t play well. We didn’t execute, we didn’t block well. Too many three-and-outs, kept our defensive on the field too many plays. Just can’t do that against a good offense like Pinson’s.

“We just made too many mistakes as a whole. Too many mistakes in the kicking game that gave them too good of field position. Against a team like them, you got to execute in all three phases.

“Coach Nix does a great job and we wish them the best of luck next week.”

Pinson Valley will take on Wetumpka at 7 p.m. on Friday at Bryant-Denny Stadium in Tuscaloosa for the 6A state championship. Wetumpka (13-1) beat Hillcrest 44-27 to advance to the final.