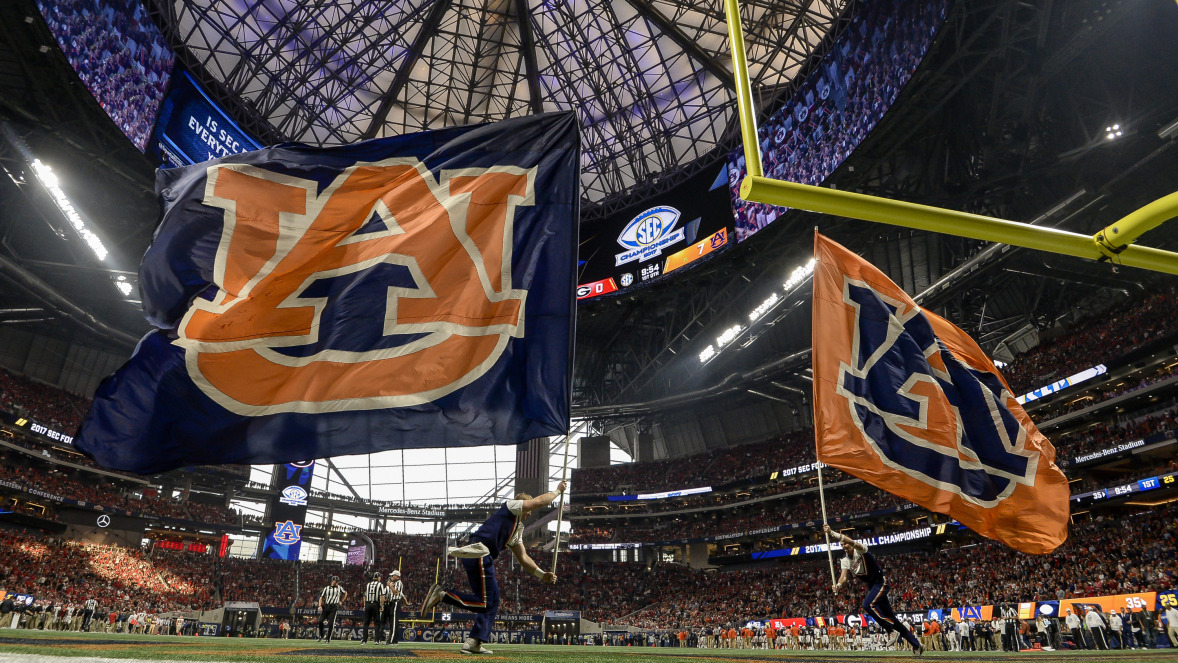 Flags Auburn football vs Georgia during the SEC Championship on Saturday, December 2, 2017 in Atlanta, Ga. Photo by Wade Rackley/Auburn Athletics

AUBURN — For the second straight season, Auburn is headed to a New Year’s Six Bowl.

The Tigers, who played in the Sugar Bowl a year ago, will make the short trip up to Atlanta where they will play an undefeated Central Florida team in the Chick-fil-A Peach Bowl on New Year’s Day. The game is scheduled to kick off at 12:30 p.m. ET and will be televised on ESPN.

Despite Saturday’s loss in the SEC championship game, Auburn was ranked No. 7 in the final College Football Playoff rankings. With a win in the bowl game, the Tigers have an opportunity to win 11 games in a season for the seventh time in program history and first since 2013.

“We’ve got a chance to win another game, and you want to run up as many (wins) as you can,” Auburn running back Kerryon Johnson said after Saturday’s game. “I remember the first year we were at six, fighting for a seventh, barely making a bowl game. It just shows how far we’ve come and what we still have to accomplish.”

Auburn and Central Florida have met three times previously, from 1997 to 1999, with the Tigers winning all three meetings.

The 1997 game pitted Dameyune Craig (Auburn) against Daunte Culpepper (UCF), and though Culpepper threw for 210 yards and a touchdown, it was Craig who stole the show with 360 yards passing, 57 yards rushing and three total touchdowns to lead the Tigers to a 41-14 victory at home. They went on to win the SEC West that season.

For Auburn, this will be the second of three consecutive games it will play at the Mercedes-Benz Stadium in Atlanta. Saturday’s SEC championship game was the first. The Peach Bowl will be the second. And the Tigers will make it three in a row when they open next season in Atlanta against Washington in the Chick-fil-A Kickoff game.

Auburn has played in the Peach Bowl three previous times, beating Indiana in 1990, Clemson in 1998 and falling to North Carolina in 2001.