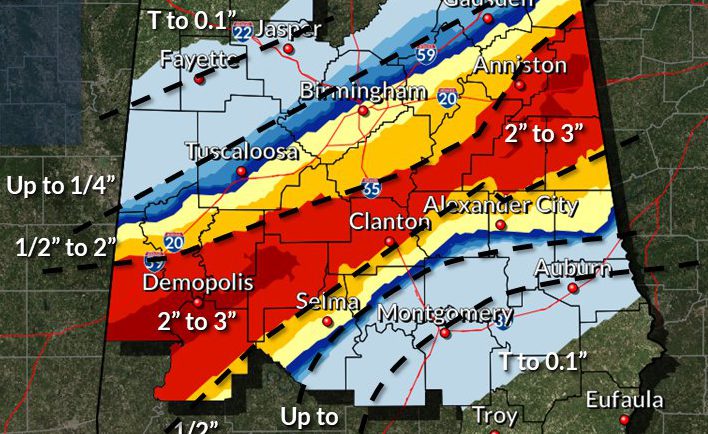 UPDATED: At 9:12 a.m., the National Weather Service in Birmingham updated its snow total accumulations for Friday.

UPDATED: At 8:08 a.m., the west central off of the Alabama Department of Transportation stated, “All interstate and state routes in Tuscaloosa County are currently passable. Use caution and drive safely.”

UPDATED: At 6:30 a.m., the National Weather Service in Birmingham added Jefferson, St. Clair and Tuscaloosa to the winter storm warning area. The warning will be in effect until midnight Friday.

Counties in the warning area should plan on difficult travel conditions, including during the morning commute. Total snow accumulations of 1 to 3 inches are expected, with the highest amounts on grassy and elevated surfaces, according to NWS in Birmingham.

A winter weather warning has been issued for counties south of Jefferson County and snow accumulations expectations have risen for those areas, as well.

Jefferson and St. Clair counties can expect about the same accumulation as predicted on Thursday. Most accumulation will be on grassy areas an elevated areas such as bridges and overpasses. Travelers should be cautious on the roadways.

Locally, temperatures will remain in the 30’s on Friday with an expected high or 35. Friday night, temps will plunge to 25 degrees.

“Snow is accumulating in northern Alabama,” the NWS statement said. “As suggested earlier we have raised snowfall totals and have adjusted the advisories and issued a winter weather warning. Stay weather aware throughout the day.” 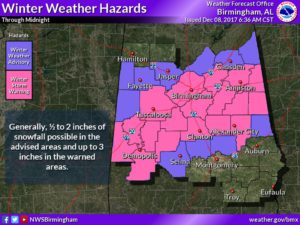 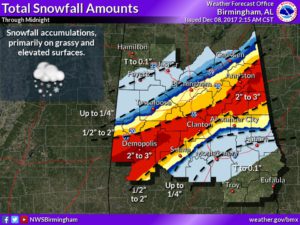