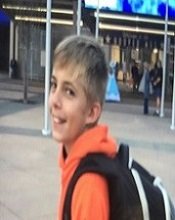 Ian Simmons, 11, is one of four brothers reported missing. Photo courtesy of the ALEA.

Ian Simmons, 11, is one of four brothers reported missing. Photo courtesy of the ALEA.

Arab police are searching for four brothers who have been missing since Friday, according to AL.com.

The children in question are: Corbin Simmons, 1; Alexander Simmons, 4; Nicholas Simmons, 5; and Ian Simmons, 11 (pictured). The four were last seen leaving their home in Arab, and authorities say they may be in a 2003 white Ford Windstar with a license plate number of 8AJ1511.

The Alabama Law Enforcement Agency, which issued the missing child alert, has not released who they believe the children are traveling with.

Anyone with more information is asked to contact the Arab Police Department at 256-586-8124.