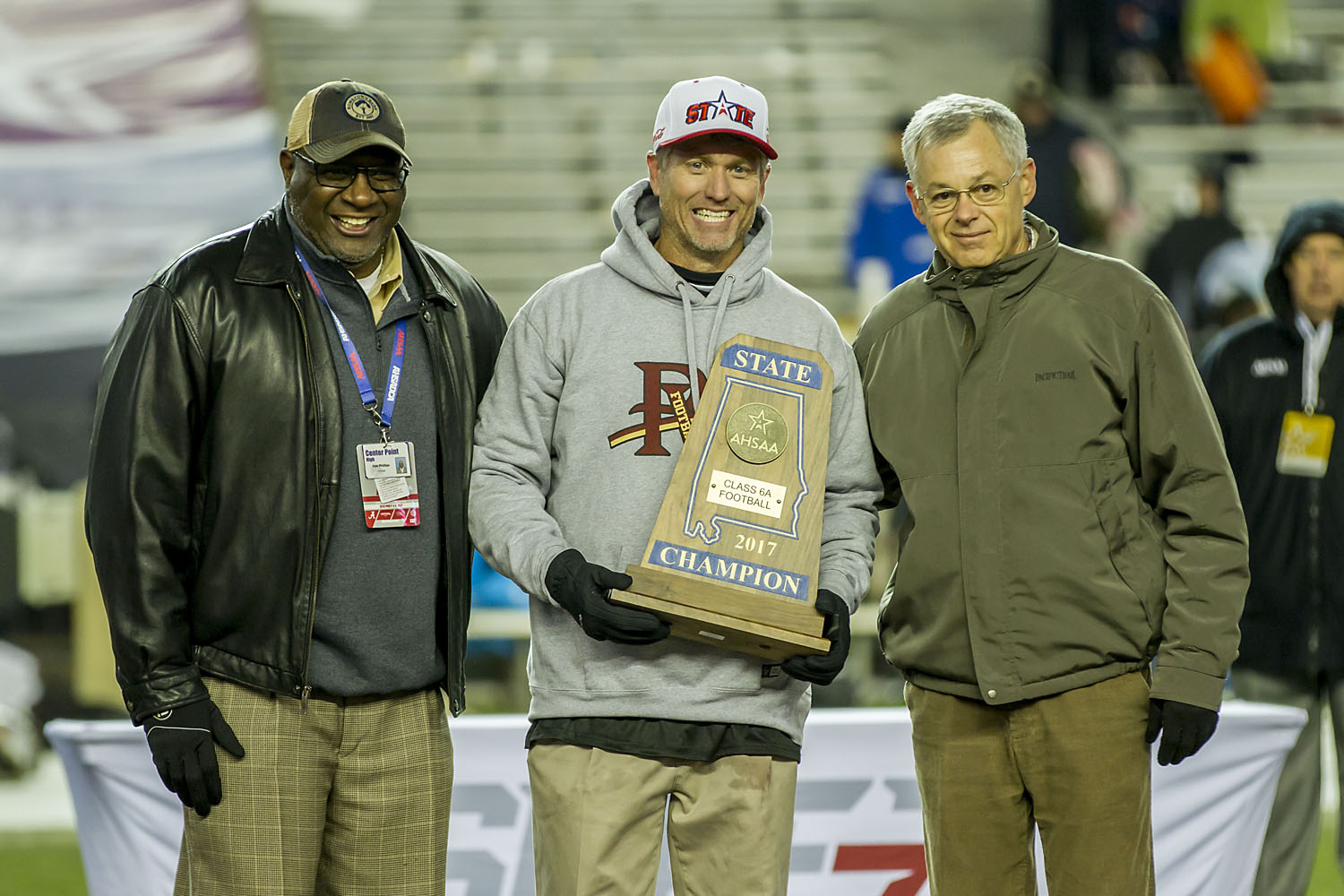 PINSON — As a college sophomore quarterback, Patrick Nix came off the bench to lead Auburn to an unforgettable win over Alabama that ended an 11-0 season in 1993.

As a high school coach, Nix guided Scottsboro to a 10-0 regular season in 2016 before losing in the third round of the Class 5A playoffs and finishing 12-1.

Hired as Pinson Valley’s head coach in January 2017, the 45-year-old Nix made good on all of the high expectations his hiring and the transfer of his quarterback son, Bo, raised.

Q: What’s the one thing you know now about the group of young men you met in that auditorium Jan. 26, 2017, that you couldn’t possibly have known?

A: “I think the biggest thing is how competitive they are, and it didn’t take us long to figure that out because we do a lot of stuff to where we compete and get after it in the offseason. Anytime we can compete, we’re going to compete.

“That, and their willingness and their hunger just to do whatever you asked them to do. When you placed expectations on them, they didn’t mind at all meeting those expectations. They didn’t back down at all when they were challenged a little bit by, ‘Hey, let’s go 15-0 and win the whole thing,’ it was ‘OK, let’s go, let’s do it.’ You just don’t know how they’re going to necessarily react at the time, because you don’t know them, but it didn’t take long for us to figure out they were all in and ready to get it done.”

Q:  When Bo got hurt, you were in the middle of coaching a football game and your son’s telling you he’s hurting so badly he can’t play. What were your emotions?

A: “At first, I thought he’ll be fine, let him go back see the trainers. At first even the team doctor was like, yeah, I think he’s OK. Bo got up and started walking around again and I could tell when he got up the second time, he couldn’t do it. And he told me, ‘Dad, I don’t know what it is, but I can’t do it.’ And he’s a very tough kid, so I knew there was something there, something serious.

“As a dad, yes, your mind is thinking, ‘OK, what do we have to do now?’ As a coach you’re thinking, ‘We gotta win this game.’ There was definitely split duties with it. It was also very comforting to have Andrews clinic and Dr. (Samuel) Goldstein right there on the sideline.

“At halftime, he came to me and said look we’ll get him into the clinic immediately tonight and whatever we have to do to get the process going we’ll get it going. … so for me as a dad, I could step away and know with his mom and the doctors, he was in great shape.

Q: Did you feel that was a turning point, a moment to rally around?

A: “(First of all) Credit our kids for being incredible with handling a new kid (Bo) coming in, getting all the spotlight, the quarterback (three-year starter Jackie Matthews) having to go play defense — and credit Jackie, he handled it unbelievably … the way he handled it really set the tone for the whole team.

“And I’ve told him that several times, the way he humbled himself through the whole process and just worked and just trusted us just speaks volumes for him and the team.

Q: Was there a defining moment when you said, yeah, we’re going to play in that state championship game?

A: “It was probably at Clay in the semifinals, when we finally got up and realized we were going to win the game (Editor’s note: Pinson Valley led just 10-7 at halftime before scoring 27 unanswered points in the second half).

“There was never a time where you could catch your breath and think, ‘OK, we’ve made it’ until literally the second half, fourth quarter of the Clay game when we realized, ‘OK we’re going to beat them, we’re actually going to get there’ because it was just that kind of a road, that kind of a struggle just to make it to the championship.”

Q: What’s it like to win a state championship, not only for a first time, but with the team your son is quarterbacking?

A: “It’s special, there’s no doubt. You know how hard that both of us have worked his whole life, for 17 years. And as his dad, you’ve seen it and watched him, and then to be able to experience that with him. It’s one of those things that forever — every Christmas, every Thanksgiving, whatever — my grandkids, his kids, will always be talking about it, telling stories about it, this season.

“No doubt it’s very special. To win one, period, it’s special, but to win one with your son, it’s extremely special.”