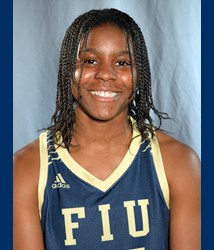 She posted the team’s season-high total with 27 points in a three-point loss Wednesday to North Dakota State.

She was 10-for-23 from the field, including three triples and four free throws.

On Thursday, she matched the feat with 27 more points in a two-point loss to ACC foe Clemson.

In that game, she hit all 10 free throw attempts, produced four more assists and recorded her second double-double of the season with 10 rebounds.

She was named to the All-Tournament Team of the FIU Holiday Tournament after averaging 27 points, 6.5 rebounds, four assists and two turnovers for the pair of games.

She played every minute of the two games, and scored 41 percent of the team’s points for the two contests.

This is her second C-USA weekly honor after taking Co-Player of the Week last season on January 16 after scoring her career-high 35 points, including a 30-foot buzzer-beater in a triple-overtime win over UTEP on January 12.