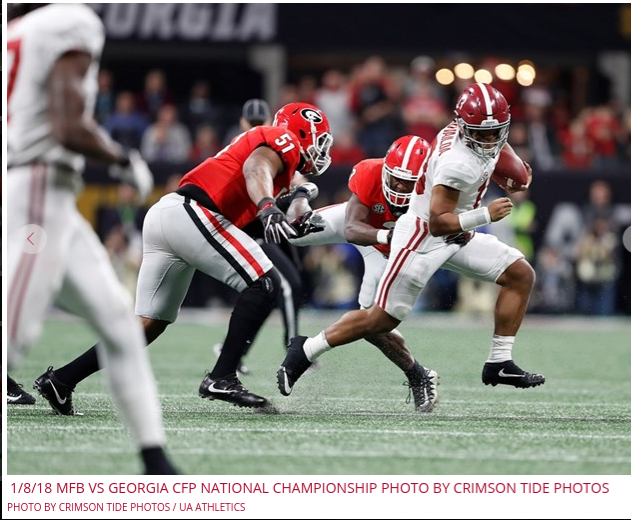 ATLANTA, GA. –The Alabama Crimson Tide was completely ineffective on offense in the first half, while the Georgia Bulldogs put together three scoring drives.

After a pair of field goals, Georgia put together a touchdown drive to take a 13-0 lead into the locker room at the half. 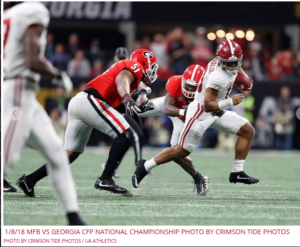 But a pitching change by Nick Saban turned the game and resulted in the coach’s sixth national championship. He’s now tied with Paul “Bear” Bryant for the most in the poll era. No other coach in history has more than four.

Jalen Hurts could never give the Bama offense a spark and gave way to Tua Tagovailoa in the second half. The true freshman never looked back.

After an uneventful three and out on the first possession, Tagovailoa returned for the second series and made a pivotal third down run. He followed that with three strikes in a row, the last for a toucAlabama Crimson Tide, National Champions, Georgia Bulldogshdown to Henry Ruggs to lead the Crimson Tide to their first touchdown and points of the game and closed the Georgia lead to 13-7.

Georgia roared back when Jake Fromm hit Mecole Hardman for an 80-yard touchdown on third-and-11 to put the Bulldogs back on top by 13 at 20-7.

A 43-yard field goal Andy Pappanastos cut the Bulldog lead to 10 before the Alabama freshmen team took over.

With fellow true freshman Najee Harris in the backfield behind him, Tagovailoa and Harris led the Tide to a short field goal, making the national championship a one score game at 20-13.

On a fourth down play from the 7, Tagovailoa hit Calvin Ridley for the touchdown and the game was tied 20-20.

The Crimson Tide defense held Georgia and put the Alabama offense in position to run out the clock in regulation and take the win. With 6 seconds remaining, Pappanastos missed a chip shot field goal and the game went into overtime.

Georgia had the ball first. Following a Jake Fromm sack, Georgia kicker Rodrigo Blankenship boomed a 51-yard to give the Bulldogs a 23-20 lead.

On the first overtime possession for the Tide, Tagovailoa took a 16 yard sack on first down to set up a second and 26 from the 41-yard line. On the next play, Tagovailoa found a streaking DeVonta Smith for the 41-yard touchdown to lead Alabama to their 17th national championship by a score of 26-23.