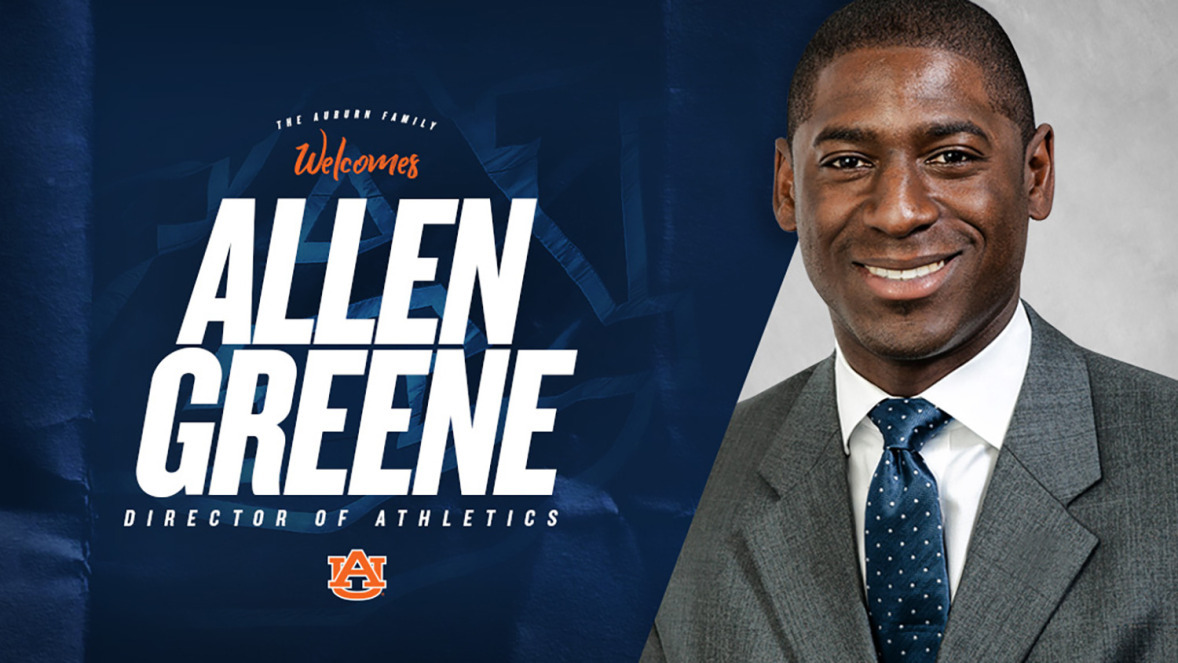 “Allen kicks off the next exciting chapter for Auburn Athletics,” said Auburn President Steven Leath. “In our interviews and due diligence learning all we could about him, it became overwhelmingly clear that Allen has the right combination of leadership, enthusiasm, experience and management to lead Auburn Athletics to success well into the future.”

A graduate of Notre Dame with a degree in finance, Greene was a three-year starter in baseball. Greene was selected by the New York Yankees in the 1998 MLB draft and played in its minor league system until March of 2001. Greene later received his master’s degree from Indiana University.

Prior to being named director of athletics at the University at Buffalo, Greene served as the senior associate athletic director for administration and deputy director of athletics. Greene also has experience working in the Southeastern Conference, having led several important business development and advancement functions at the University of Mississippi. Prior to joining Ole Miss, Greene spent two years working in athletics advancement for Notre Dame and five years in its compliance office.

Greene’s tenure at the University at Buffalo is noted for success on the field and in the classroom, as well as for donor and corporate development efforts that led to an array of facility enhancements.

“Serving Auburn University as Director of Athletics is a tremendous honor and an awesome responsibility, Greene said. “Time-honored traditions have helped create a culture of success at Auburn that is incredibly rare. I am humbled that President Leath and the Search Committee entrust me to maintain all that is uniquely Auburn and utilize that foundation to forge a path to even greater heights. Whether in the classroom or on the fields and courts of play, these lofty expectations are embraced, and I am eager to get to work for the Auburn Family.”

One of the youngest athletics directors in the NCAA Division I ranks, Greene, 40, is highly regarded by his peers. He is actively engaged in the National Association of Collegiate Directors of Athletics, Minority Opportunities Athletics Association, and LEAD1, an association dedicated to preparing today’s students to be tomorrow’s leaders.

“Allen Greene represents, by far and away, one of this generation’s pinnacle players within the rapidly evolving landscape of college athletics,” said Kevin White, athletics director at Duke University. “Allen will very quickly assimilate and become a stalwart within the heartbeat of the highly competitive SEC, as well as a serious leader nationally around the myriad of respective NCAA and CFP interests and future considerations. Allen and Christy Greene and their beautiful family, on a ten-point hiring scale, represent something like a 14!”

“We looked for a charismatic, up-and-coming and elite leader to take Auburn Athletics into the future, and we found the very best in Allen Greene,” said Jason Dufner, a former Auburn Men’s Golf All-American, PGA Tour player and search committee member.

The appointment of Greene follows the recent retirement announcement of Jay Jacobs, who served as Auburn’s Director of Athletics since January 2005. Under Jacobs’ leadership, Auburn consistently ranked in the top 10 percent of the NACDA Directors Cup standings and won 12 national championships and 25 conference championships.

Under Jacobs’ leadership, annual revenues grew from $46 million to more than $145 million. The financial strength of the department allowed for investment in numerous facility projects designed to benefit Auburn student-athletes and fans. Consistent with Jacobs’ stated vision to be “the best school for the best athletes,” the Graduation Success Rate for Auburn’s student-athletes under his watch recently reached 80 percent, the highest in program history. Jacobs was named a 2017 NACDA /Under Armour AD of the Year and was a finalist for the 2017 Sports Business Journal AD of the Year.

WHAT OTHERS ARE SAYING ABOUT ALLEN GREENE

“We looked for a charismatic, up-and-coming and elite leader to take Auburn Athletics into the future, and we found the very best in Allen Greene.”

“Allen is a dynamic leader and will serve not only our students but our community and the Auburn Family. His great energy will make an immediate impact. Allen will also honor Auburn’s storied history and play a big role in our future success.”

“We welcome Allen and his family to Auburn and the Auburn community. Our expectation is that he will lead Auburn Athletics with excellence and build on the legacy that he takes over.”

“Allen possesses the expertise and tenacity to lead our Athletics Department to even greater heights. His will to win is contagious. Allen displays the highest values that we strive to embody as Auburn men and women. I’m ecstatic to have him at the helm of Auburn Athletics. Allen has left a mark everywhere he has been. He’s an authentic communicator who will be impactful in leading our student-athletes, staff and stakeholders in all areas.”

“Allen is a positive role model. He will inspire our athletes to live with integrity and lead meaningful lives.”

“I’m very excited about bringing Allen into the Auburn Family. As a former student-athlete, he understands the importance of winning on the field and in the classroom. Allen has been a winner all his life, and he will bring a competitive edge with him.”

“President Leath and the Auburn Search Committee have chosen well for the Tigers’ next Athletics Director. Allen Greene is high integrity, high character and high energy. His background and experience will be an exceptional fit for Auburn and navigating the highly-competitive SEC environment. Allen is simply a winner, and he’ll partner with all aspects of the Tiger community to achieve spectacular results on and off the field.”

“Simply put, Allen Greene represents, by far and away, one of this generation’s “pinnacle players” within the rapidly evolving landscape of college athletics. Allen is very bright, terribly engaging, innately empathetic, highly task-oriented, strong, adaptable, passionate, intense, and the list goes on. Perhaps most importantly, in addition to all of the aforementioned characteristics he drips with unqualified integrity! Allen will very quickly assimilate and become a stalwart within the heartbeat of the highly competitive SEC, as well as a serious leader nationally around the myriad of respective NCAA and CFP interests and future considerations. Bottom line: Allen and Christy Greene and their beautiful family, on a 10-point hiring scale, represent something like a 14! Given that, they are unequivocally a brilliant addition to the highly esteemed Auburn University family.”