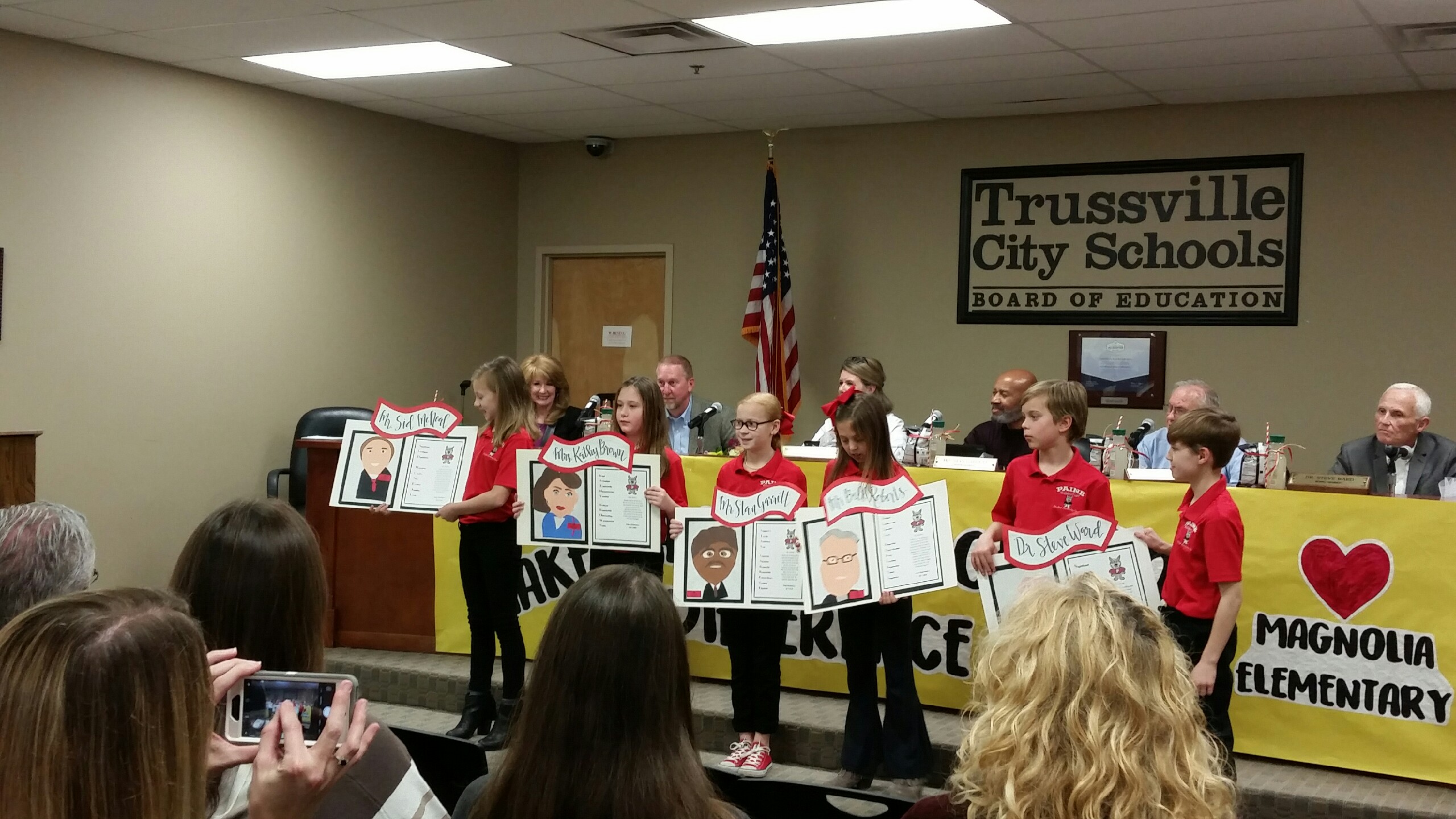 Students from Paine Elementary School present TCS school board members with customized signs during Monday's meeting. Photo by J.R. Tidwell / For The Tribune.

TRUSSVILLE — January is School Board Member Recognition Month, and representatives from each member of Trussville City Schools were on hand at Monday’s board meeting to honor the TCS BOE members. 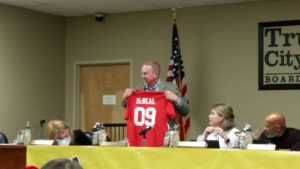 Board President Sid McNeal holds up a customized shirt given to him by students from Hewitt-Trussville Middle School.
Photo by J.R. Tidwell / For The Tribune.

A short ceremony was held at the beginning of the meeting, during which time the member students and faculty presented gifts to each board member in recognition of their work.

First off students from Magnolia Elementary School displayed a banner that was signed by the children at the institution.

A delegation of students from Hewitt-Middle School then presented each board member with an athletic-themed T-shirt with the words “Trussville All-Stars” written on the front. The back of each shirt had the last name of the board member it was presented to, and the number for each was the year that member joined the board.

Students from Cahaba Elementary gave each board member flowers while a video was played by faculty members that featured a song by the school’s choir.

Children from Paine Elementary presented board members with individual customized signs that included a likeness of them as well as some kind words.

Hewitt-Trussville High School Principal Tim Salem presented board members with a drink and snacks courtesy of the students at HTHS.

After the ceremony the board members flipped the script and honored several students themselves.

First up were congratulations to HTHS senior Logan Cobb, who was named one of two delegates selected to represent the state of Alabama in the United States Senate Youth Program (USSYP).

He will travel to Washington in March to hear policy addresses by senators, Cabinet members, and officials from the Departments of Justice and State.

He will also participate in a meeting with a Supreme Court justice and the president.

All of his expenses are being covered by The Hearst Foundation. Cobb will also receive a $10,000 scholarship.

Next were congratulations for David Black and Sheila Murray, the Elementary and Secondary Bus Drivers of the Year.

Finally the board recognized several seniors who play football at Hewitt-Trussville High School in honor of the Huskies’ undefeated 10-0 regular season. Also honored were coaches and other faculty members involved with the program.