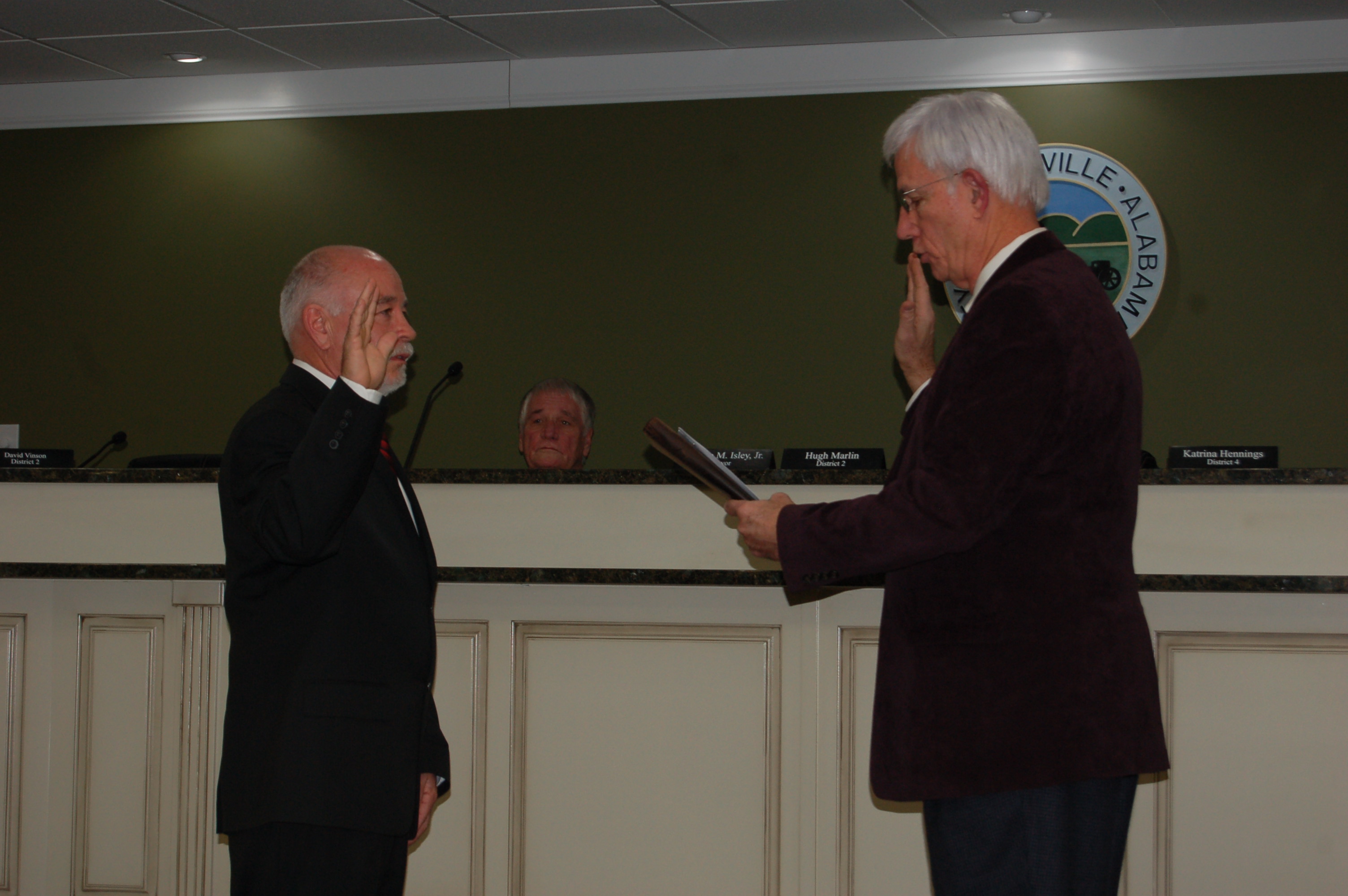 David Vinson is sworn in by Rep. Jim Hill. Photo by Nathan Prewett.

SPRINGVILLE – David Vinson was sworn in as the newest member of the Springville City Council at a meeting on Monday night. Vinson replaces John Marlin, who represented District 2 and recently resigned from his position on the council due to health reasons. 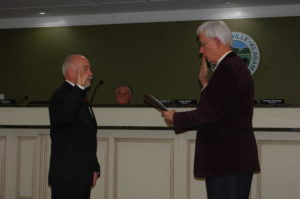 David Vinson is sworn in by Rep. Jim Hill. Photo by Nathan Prewett.

Vinson was sworn in by Alabama State Representative Jim Hill of House District 50.

Before the swearing in ceremony the council heard from candidates running for St. Clair County Superintendent of Education currently occupied by Jenny Seals. The candidates were Greg Cobb and Mike Howard, who brought up issues regarding some of the St. Clair County schools facing problems with overcrowding, technology in classrooms as well as improvements for special education.

The council heard from members of Forever Wild Land Trust and the Friends of Big Canoe Creek on securing the land as a greenspace for public use. Among the speakers were Candice Hill and Barnett Lawley of the St. Clair County Economic Development Council. Springville Mayor William Isley said that efforts to bring a Forever Wild project into Springville have been in the works and may be accomplished sometime in the coming months.

The speakers said that the project could have economic benefits for the city, such as attracting more businesses and visitors to the area. Hill said that among the economic impacts that the 365 acre land could have is that for every dollar invested in the project the city will get $5 back. The city has agreed to invest $50,000 for the project and to enter into a maintenance agreement with Forever Wild.

“It’s all economic impact,” Lawley said. “That’s money spent that you can collect your taxes in, so that’s why it’s so important. I see a great opportunity for Springville to get behind this.”

Forever Wild will move forward in appraising the value of Big Canoe Creek.

Later the council voted in favor of spending $501 for repairs to Fire Engine No. 1, which Springville Fire Chief Richard Harvey said had a water gauge that needs to be replaced. Afterwards, the council approved spending $6,600 on a generator room change order for the storm shelter, in particular the installation of louvers for the generator room.

The council voted in favor of a resolution related to expenditures. The resolution allows for reports for potential expenditures to be filed and brought every month to the council for approval. City Attorney James Hill outlined four categories of expenditures: including a municipal threshold to prevent payments or expenses from going overboard, emergency measures (ex: technology failure, etc.), operations and payment authorization.

After discussing lighting for the Springville football fields, the council voted to table further discussion until it receives a package of proposals from Musco Sports Lighting. Discussion will also be held at the next meeting on the Springville Youth Soccer’s use of fields for players to use.

In other business the council voted to reappoint Ron Howell to the Commercial Development Authority for a term of four years and Wesley Dickmann to the Board of Adjustment, a three year term. Don Carroll and Brett Butler were appointed to the CDA, both for four year terms.

The council also voted to table a 2017 audit report in order to do further reviews before it is discussed at a later meeting.

The next meeting of the Springille City Council will be held on Jan. 19 at 6 p.m.