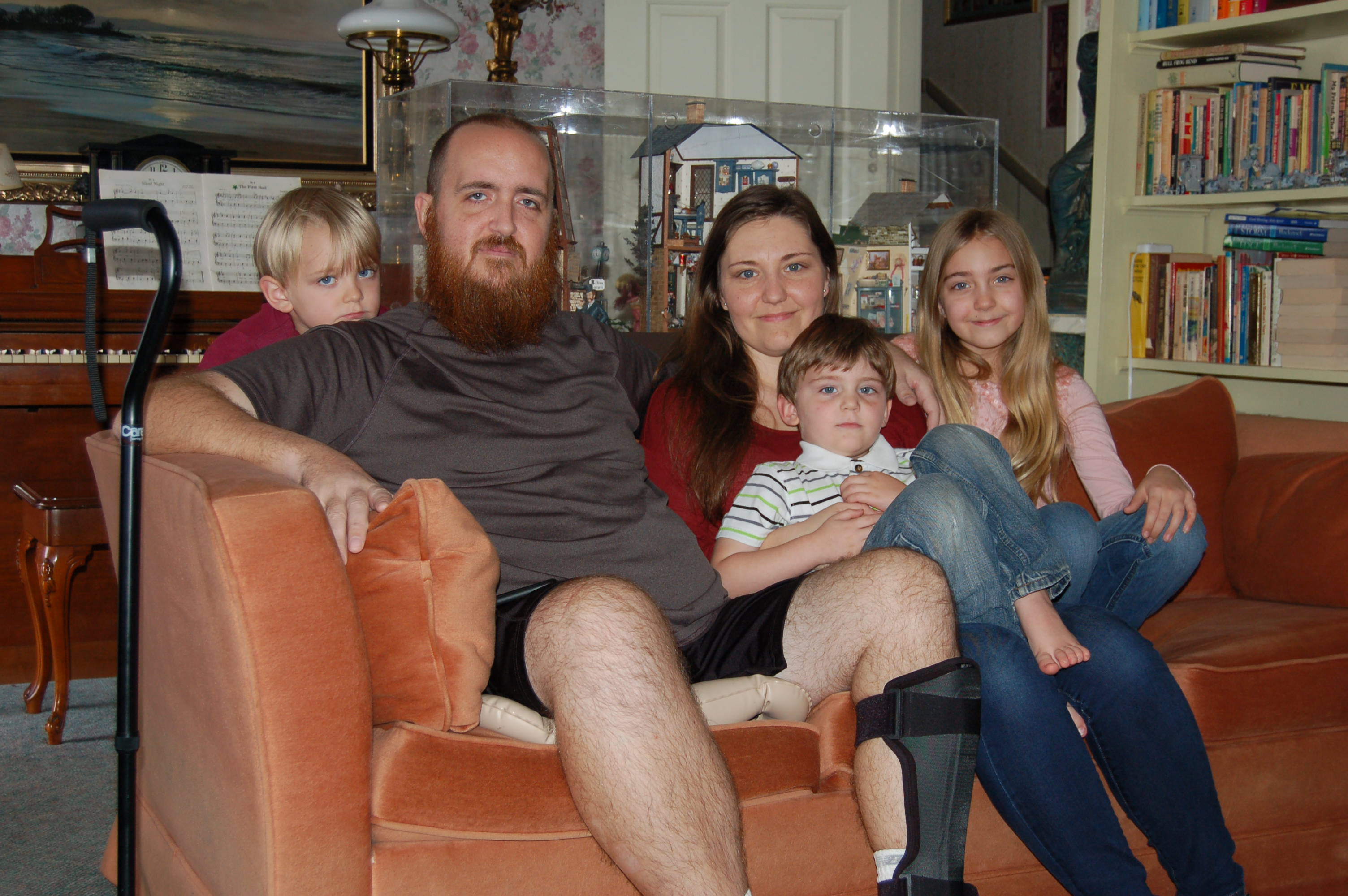 Luke York stands behind his father, Adam York next to Feclia, their other son, Alex and their daughter Haley.

PINSON — By all accounts, Adam York shouldn’t even be alive after what he had been through. But he is. And he is home again with his family at their home in Pinson, on his way to full recovery from a case of the flu that resulted in an extensive stay at a hospital and, even worse, very nearly killed him. 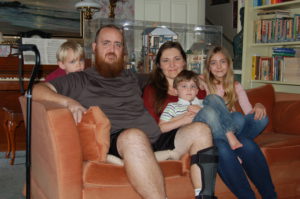 Luke York stands behind his father, Adam York next to Feclia, their other son, Alex and their daughter Haley.

Day by day he is getting along with the help of his wife, Felicia, and his mother, Prim, after a struggle that lasted for two months.

Felicia York said that he had both Type A and Type B flu that turned into viral pneumonia. But no one knows quite happened to make his case so severe compared to most this year when a flu epidemic hit the nation and was even declared a crisis in Alabama.

A portion of these cases both nationally and in the state proved fatal but there was something about York’s illness that was puzzling to the physicians who were treating him.

A father of two boys and one girl, York is a lifelong Pinson resident. He owns a kettle corn business in the city and runs Stewart Auto Services. He and Felicia York have been married for 14 years. He also serves as vice president on the board of  the Friends of Turkey Creek Nature Preserve and is an avid hiker of the trails there.

York said it had been years before he was sick enough to see a doctor and had never had to take much medicine. Physically, he was in good shape. He never smoked, never drank and got as much exercise as he could. And yet what would follow would almost cost him his life.

Though it’s been reported on by various media outlets, the story began on a sleepless Christmas night in 2017 when York came down sick with the flu. His family had already been sick a few weeks prior but by the morning, difficulty breathing and a high fever were enough that he and his wife decided to consult a doctor.

“I hadn’t had the flu since I was a child,” he said. “Usually when I get sick I wait it out. I don’t do medicine so I just sort of wait it out and this one by [Jan. 1] my temperature was really high. I started hearing fluids in my lungs when I breathed and so I went all night without any sleep and the next morning I just told [Felicia] I’ve got to go to the doctor.”

They sought help at Grandview Medical Center in Birmingham where York was kept overnight. His temperature reached 104 degrees and he was shaking badly, he said. Because of his claustrophobia he refused to wear a bipap mask and had to be intubated for three days with a respirator. He was told that he would be asleep during the entire process.

Though the intubation was supposed to last only three days, York’s condition began to worsen, prompting doctors to implement a type of life support called extracorporeal membrane oxygenation or ECMO. He had a tube that pumped blood from his groin area to his neck, bypassing his lungs which were full of fluid that had to be drained out.

“Some people have said that if you’re really healthy and strong your immune system can work overtime,” Felicia York said. “And it ends up killing you because it’s working so hard to kill the flu. One way your body gets rid of infection is to send fluid and wash it out but if your lungs fill with fluid you can’t really get it out.”

York flat-lined twice as procedures were being performed while he was unconscious. At one point he began bleeding. Felicia York said that he had lost 25 units of blood. His oxygen level had dropped to catastrophic levels and could have potentially led to brain death.

“On the day I checked out, one of the nurses – she said ‘Your oxygen was so low for so long you should be brain dead,'” York said. “They did MRI’s, CAT scans and they said there was nothing wrong with my brain.”

By the time York woke, he still had a respirator in his throat and could not talk. A feeding tube was placed in his nose to deliver food to his stomach. He was extremely confused and could only raise his hand six inches from the bed.

After a week the respirator tube was removed from his throat he was able to talk a little bit but still couldn’t eat properly. Eating and drinking regular food would have gone into his lungs and filled them up as his esophagus was not working then.

“It was so miserable because I couldn’t even have water,” he said. “I couldn’t even have ice. I’d have somebody bring them in and I’d lay on my side with a towel and I’d take ice cubes, stuff them into my cheeks just so I could feel something in my mouth.”

After using a scope to stretch his esophagus he was able to eat soft food in three weeks.

York was medicated with fentanyl, a pain killer which is “the equivalent of heroin,” he said. During his stay at the hospital his nights and days were often haunted by nightmares and bizarre, sometimes terrifying, hallucinations. In one hallucinogenic bout he saw rats swarming from the ceiling and dropping onto his bed. In another he saw people trying to hurt him as he lie helpless in his bed.

He knows full well now that they weren’t real but they were to him at that time when he was heavily medicated and the illness had wreaked havoc on his body. It would be quite some time before he would be able to sleep properly.

But it wasn’t all misery there. There at the hospital, he was able to get to know the people that were taking care of him. Friendships blossomed as it became hopeful that he was on the mend.

“They treated me great,” he said. “I’m actually friends with four or five of them now. We text and we’re going to start hanging out. They were coming in on their off days to check on me and they were working extra days just to be there and work with me.”

Felicia York said that nurses regularly attending to him became so concerned for him that they were even checking on him when they didn’t have to.

Well enough to go home, York checked out of the hospital on Feb. 24.

“I’d say God first, prayer second, doctors third,” he said on what he credits for his recovery. “The doctors and the nurses – none of them have an explanation for why I’m alive.”

He’s made waves in the medical community, saying that he was told that he’ll be in case studies on ECMO, which he said that without it he would either still be on life support or wouldn’t have survived altogether. Felicia York was featured on Good Morning America, CNN, and People Magazine to talk about her husband’s case.

Though he’s expected to make a full recovery he said that he still has a ways to go before he’s completely back to normal. He has regained most movement in his body and he eats regular food now but is still in physical therapy to help him move around normally again.

It would probably go without saying that the whole thing has not gone without changing him. York said that the response from people as his case spread like wildfire online and by word of mouth has changed how he sees people.

“I definitely have a different appreciation for people,” he said. “The outpouring of help – we had often talked about it because we try and be independent. We don’t rely on anybody else for our income. We work for ourselves. We home-school our children. We try to do everything ourselves. We wondered if anything would happen to me would anybody care enough to try and help [Felicia].

And that question has been answered by people we don’t even know, people who heard the story. They’ve sent money, they’ve sent food. They’ve literally taken care of us. It’s been unreal.”

York said that he plans to write a book about his experience with Felicia. But for now he continues to work to gain full mobility.

They still wonder at the whole experience and they still wonder at what some might consider the miracle of York’s recovery, but for him and his family the worst of the nightmare has passed, letting him get back on track as a business man, hiker, popcorn guy, husband and father. Day by day.