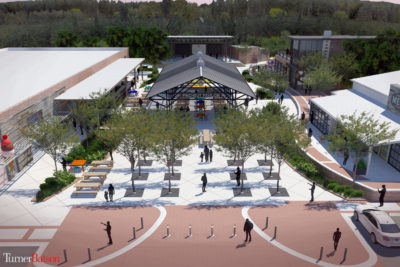 The city has remained quiet about the deal until it is complete, Choat said, and it is expected to be signed this week.

Choat hinted it involves two city blocks downtown that are big pieces of the redevelopment puzzle and will address issues with parking and traffic navigation.

“This will answer many questions about accessibility and parking,” he said.

The public is invited to hear details about the downtown redevelopment efforts at the “Let’s Talk Trussville” Town Hall Panel which is presented by Alabama Power and hosted by the Trussville Tribune.

The panel begins at 6 p.m., however, officials will be available at 5:30 p.m. to talk one-on-one with residents and share renderings of the development.

Trussville has talked about redeveloping downtown for 30 years, but no plans moved forward until the election of a new mayor, Choat, and City Council last year. Plans are drawn and construction is set to begin this summer on a project that will include an event stage, large pavilion, retail shops and several new restaurants, including Melt, Edgar’s Bakery, Trussville Common House,  Slag Heap Brewing Co. and a second craft beer brewery. The city envisions that the redevelopment project will preserve and grow the historic downtown area.

The first phase of construction is expected to bring at least 10 new businesses to Trussville.

Improvements will be made to the busy intersection of Main Street and Chalkville Mountain Road, which is considered the heart of Trussville, including wider sidewalks, pavers, better lighting and traffic flow. The city is in talks with the Alabama Department of Transportation to add two traffic lights on Highway 11 to control traffic flow through downtown.

Infrastructure construction should begin this summer. Choat said a more detailed timeline will be unveiled at the Town Hall Panel.