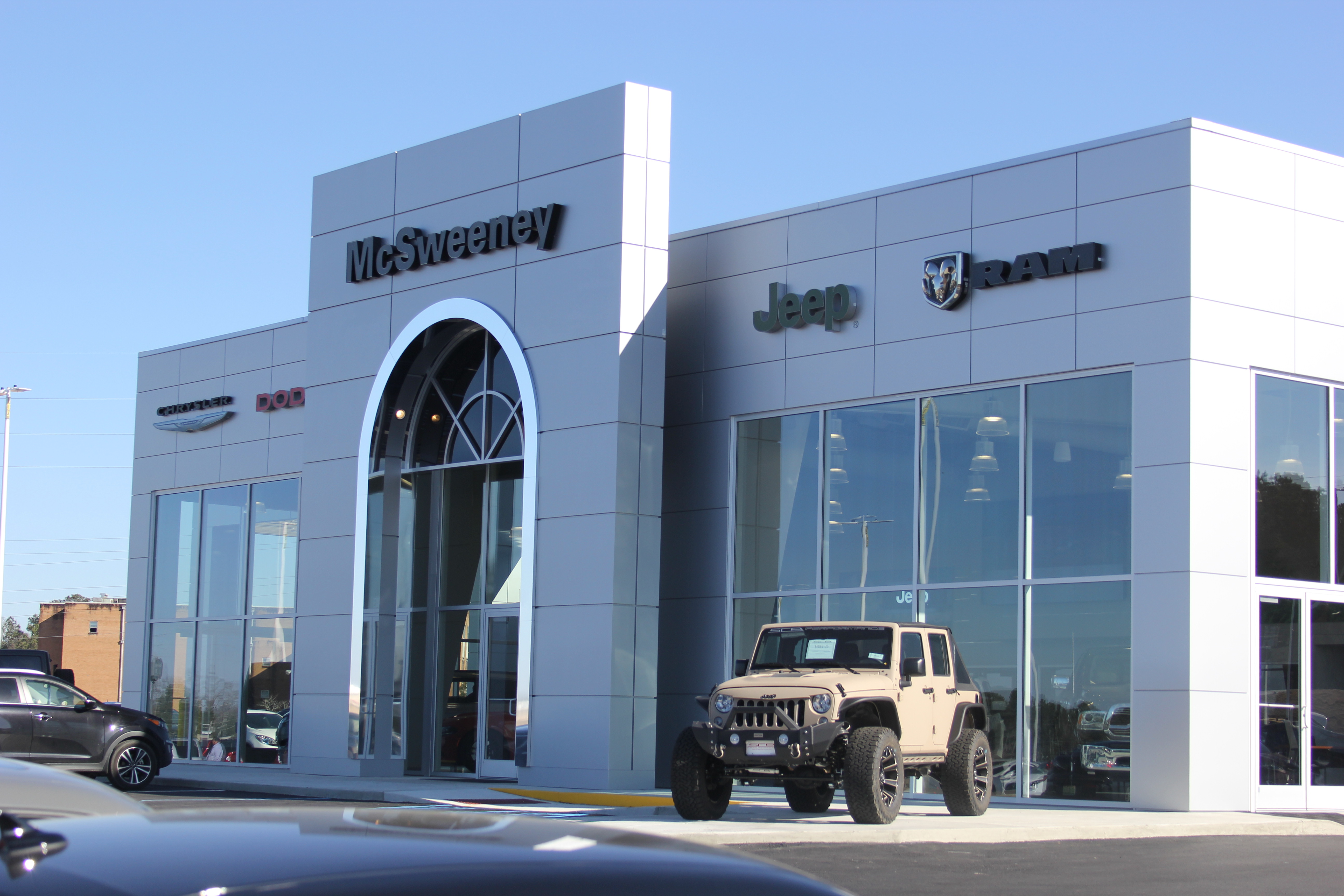 The front of the McSweeney dealership. Photo by J.R. Tidwell.

McSweeney Holdings, a specialty vehicle manufacturer based in Trussville, has recently opened a brand new automotive dealership in nearby Pell City. 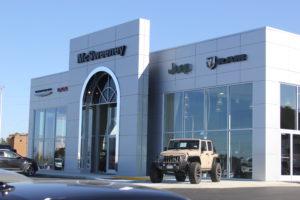 The front of the McSweeney dealership. Photo by J.R. Tidwell.

The new location, McSweeney Chrysler-Dodge- Jeep-RAM, opened to the public on Jan. 2. It is located at the intersection of Interstate 20 and Highway 231.

One thing that will be on offer at the new dealership that sets the lot apart from the competition will be the availability of specialty vehicles. The company takes new vehicles and converts them to meet many requirements for different jobs.

“Basically, we would get a vehicle right out of the plant and turn it into some type of specialty vehicle, whether it be an off-road style truck, a shuttle bus, a mobile office, or a bulletproof vehicle,” said Michael McSweeney, who is overseeing the new dealership. “ The things that were out of the ordinary that the manufacturer would not have enough volume to want to deal with, they contract companies like us to do those things.

That business model has stayed the same all the way from the late ’70s all the way to today. Our business has historically been primarily specialty manufacturing. We then take those specialty vehicles and sell them to dealerships all over the world.

We have about 400 dealers we sell to in the United States. We also sell to Canada, the Middle East, South Korea, Norway and a lot of other international markets as well.

The bulletproof vehicles mainly go to North Africa. We are a global company, but based out of Trussville. We have been there since the late ’80s. We have always made an effort to be a part of the community, whether it’s giving things to schools or working with local ministries helping underprivileged kids get a better education.

Our facility is right down Highway 11. It’s the next facility after Amerex going out of Trussville. My dad started our company in the late ’70s as a specialty vehicle manufacturer. We work with Ford, General Motors and Mercedes-Benz today, but back then he was just working with General Motors.

“Although our businesses are venturing out of Trussville, we still consider our headquarters to be Trussville. Trussville is our home town for sure. The specialty vehicle manufacturing is still the largest part of McSweeney Holdings.”

The company decided to branch out and expand, so now McSweeney Holdings has two car dealerships.

“As the economy and the automotive industry started to recover out of the recession our family took a step back and looked at some of the mistakes maybe we had made in the business,” said McSweeney. “We said OK, now that business is improving how do we make provisions to not make those mistakes again. One of those mistakes was being so big in just one thing.

So we said ‘OK, let’s take some of our earnings and reinvest in different businesses’. Not so far outside the automotive industry that we didn’t know what we were doing, but also not just in specialty vehicle manufacturing. We diversified our manufacturing business and started doing some other things with Mercedes. One of the things we were very interested in was the dealership business, the retail automotive business.

My dad had done business with Bill Stanford in Talladega for 30 years. We knew Bill was getting older, and he didn’t have any children that wanted to take the business over. So we thought he would be a good person to talk to. We really liked his business because he had Cadillac, GMC and Chrysler-Dodge-Jeep-RAM all in one facility. You don’t see that much anymore.

What also attracted us was his territory included Pell City. St. Clair County is one of the fastest growing counties in the state of Alabama, and Pell City is the fastest growing city in the county. When we realized there was the potential to buy his store and move the Chrysler-Dodge- Jeep-RAM franchise to this new facility in Pell City, we just thought it was a phenomenal opportunity, so that’s what we did. This is our second store. We have Cadillac and GMC in Talladega.”

While the process to acquire the franchise took some time, construction of the new location came in ahead of schedule.

“The whole process from the acquisition to the move has been about two years in the works,” McSweeney said. “We worked with Blalock Building Company in Trussville. They built this facility, and they were phenomenal to work with. We said we wanted to be open by 2018. They said it was a bit of an ambitious timeline, but we said we had to be open by 2018. They said they would try to make it happen.

The first project schedule said we would be open by the second week of January. We said we needed to be moving in in December. Typically, construction projects get behind, but they worked and worked and had us ready to move in by Dec. 18. They were basically a month ahead of their schedule. It was less than nine months to clear the land and build this facility.”

The dealership has a selection of 300 vehicles to choose from, including some specialty custom vehicles made in Trussville. The facility also includes a multi-station service bay.

“We have about 200 new Chrysler, Dodge, Jeep and RAM vehicles on the lot,” McSweeney said. “We are heavy in Jeeps and RAM trucks. We also have a lot of custom Jeeps on the lot that we build at our Trussville facility and sell to this business.

That is something we want to help make us stand out from other dealerships is our wide variety of custom vehicles with full factory warranties. We also have about 100 pre-owned vehicles of all makes and models.

We have 15 service bays, with 10 dedicated to heavy work for things like engines and transmissions. Then we have five for quick service for things like oil changes, tire rotations and alignments.”