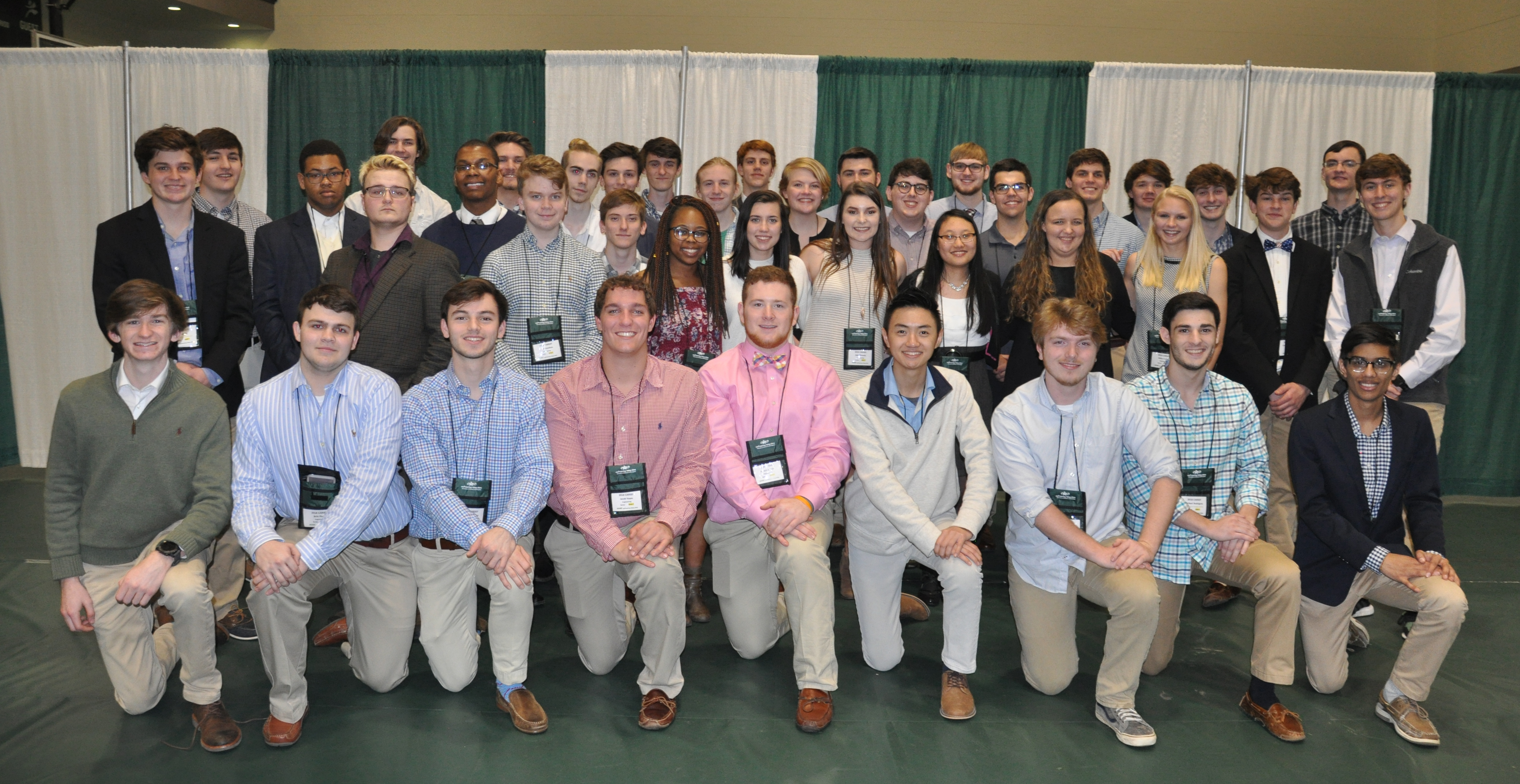 TRUSSVILLE — On March 3, 18 teams from the Engineering Academy at Hewitt-Trussville High School were sent to the Central Alabama Regional Science and Engineering Fair at UAB. Of those 18, two walked away with first place, two placed second and one earned third place for their innovations while several received honorable mentions.

The students are able to see how their years of engineering instruction comes together to result in a project that has the potential to make great change,” said Jason Dooley, who leads the academy at HTHS. It is amazing to see how the students brainstorm, research, and then take their idea and create a working prototype.”

Those who won in the top three will advance to the State Science Fair at the University of Huntsville in April. Projects at the UAB fair ranged from a 3D-printed leg brace to cell phone grips for those with arthritis. Students who placed in the top three won in two categories: energy and transportation and engineering. The engineering category had around 20 people taking part in the competition.

First place in the Engineering Category went to Long Nguyen, Ethan Swatek, and Cannon Riccio for an affordable, 3-D printed leg brace. Their goal was to create a type of leg brace that would be cheaper than most others while still being efficient. They said that the brace they designed would sell for $60 as opposed to other prices in the $200-$300 range.

The brace is composed of 3D plastics and held together with hinges and straps. It can be adjusted and customized based on one’s leg length and width or however one needs to wear it. Nguyen said that they measured their classmates’ legs to get an average size before submitting the design to a 3D modeling software.

“We were honestly surprised,” said Swatek on winning. “There were so many other people that had good projects. It was surprising but we knew that we worked really hard on it, so it paid off in the end.”

Jacob Hayes and Joseph Seagle won second place in the engineering category for designing an automatic drink lid dispenser. Their design is intended to be used in fast food restaurants where drink lids can be received automatically without touching a stack of them. They built a prototype that uses an ultrasound sensor, like a motion sensor, to dispense lids.

Seagle said that they based their design off of automatic soap and paper towel dispensers you find in bathrooms. The automatic dispenser is meant to keep things more sanitary.

“The gist of it is most times you go into a restaurant and there’s a stack of lids,” said Hayes. “Everybody just goes and grabs a few and put them back. It’s super unsanitary because everybody’s touched them. This is a way to eliminate that.”

In first place in the Energy and Transportation Category was a longboard retrofitted with brakes, put together by Ian Knapp, Michael Rodriguez, and David Murrell. They used inverted bicycle brakes and 3D printed materials to make their design, which can be detached and reattached to any longboard.

The purpose of these retrofitted brakes is to give anybody using a longboard a way to slow down if they’re going fast. They said that if you’re going down a hill the brakes can be used to slow or stop you altogether, which can help in preventing accidents.

“It can get very dangerous when you’re going down a hill and there’s no easy way to stop without throwing your body on the ground or running into something,” said Knapp.

Vraj Patel and Emily Coggins won second place in the Energy and Transportation Category. They built and programed a prototype that uses microwave sensors that detect blind spots on the road. Coggins said that they can be attached to older cars so people wouldn’t have to buy a new car to get the already built-in detectors.

Patel said that, as they advance to the state competition, they’ll add a buzzer system that will sound off when a car in a blind spot is detected. The two had a toy car on display where a panel was attached to the inside to demonstrate what the detectors do when they sense cars. Patel pointed out that the panel shows whether a car is on the left or right side of the road when it enters a blind spot.

And in third place in Energy and Transportation were Hayden Parks, Drew Kinzer, and Nathan Feagans for their emergency solar panel umbrella system. The panel acts as an energy production system in cases of disasters where electricity goes out. Like the other projects at the fair, it was designed to be affordable and portable.

The structure has a 12 volt battery at the base with four solar panels that can fully charge the battery in a day and a half. The battery goes through an inverter in a control panel on the structure, which can hold an outlet system as well. Parks said that it can charge up to seven phones at the same time.

They said that they will eventually incorporate a weather radio into the panel in case a situation arises where there’s no cell phone signal.

“It’s a real good resume builder for us who want to go into a STEM-based profession,” said Parks on how the science fair impacted him. “I’m going to UAB personally, so I can go up to them and tell that I got this in their science fair and placed this. It’s a pride thing too. You can say you made it and validate the fact that you’re going to be an engineer one day.”

Dooley couldn’t be prouder of his students.

“I am incredibly proud of our Engineering Senior Design students this year,” he said. “It is so meaningful for me as a teacher to see these students who started out with us as freshmen grow and learn throughout their four years. The Senior Design class is the culmination of everything that they have learned in our Engineering Academy.”

See below for a photo gallery of the students with their projects, including the winners, honorable mentions and other projects at the academy. 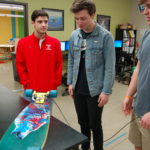 Ian Knapp, Michael Rodriguez, and David Murrell with a longboard retrofitted with brakes. 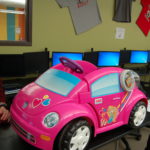 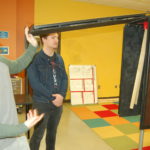 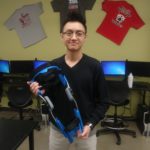 Long Nguyen with a 3D-printed leg brace. He designed this with Ethan Swatek and Cannon Riccio. 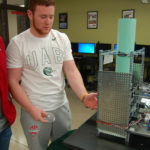 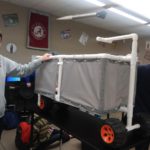 Andrew Adams and Nick Shirley with a collapsible beach cart 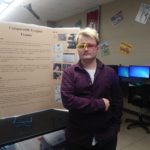 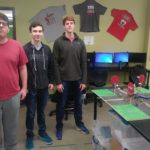 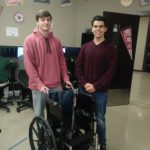 Stephen Lawrence and Nick Finlay with a built-in lifting device for wheelchairs and sides that tilt down. 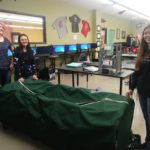 Katie Applegate, Alena Jen, and Meagan Turner with a portable shelter that can be used in emergency weather situations. 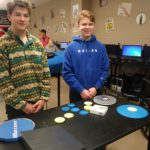 Hunter Goodson and Chris Lewis with their disc golf tracker. 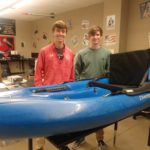 Ethan Greene and Carson Spruiell with an improved kayak seat. 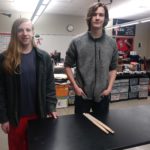 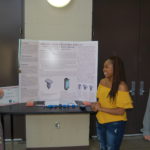 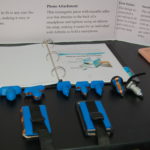 A close up of the phone grips designed by Anna Houser, Jade Thomas and Jaylan Maddox.