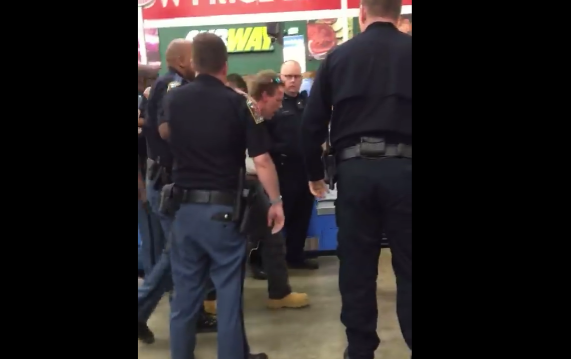 TUSCALOOSA –A police chase that extended 20 miles and included multiple law enforcement agencies ended among the fruits and nuts in the Tuscaloosa Walmart produce department.

On Saturday at around 10:15 pm, West Alabama Narcotics Task Force concluded an investigation into the trafficking of methamphetamine from Fairfield, to the Brookwood, AL area, according to a statement from The Tuscaloosa Police Department.

Agents from West Alabama Narcotics Task Force, ALEA and Lakeview Police Department attempted to conduct a traffic stop on the suspect vehicle near exit 86 when the suspect refused to stop and a vehicle pursuit ensued.

Officers pursued the suspect through Brookwood to I20/59 to E Skyland Blvd where the pursuit ended after the suspect crashed into a concrete barrier in front of Walmart Superstore. The suspect jumped from the vehicle and fled inside the store, where he was apprehended near the produce section of the store.

Weaver was transported to DCH where she was treated for non-life threatening injuries. Weaver was found in possession of a quantity of Xanax Pills on her person. During a search of the vehicle, agents recovered approximately 4 oz. of Methamphetamine Ice, digital scales and an unknown liquid.

Dawson was arrested on charges of Trafficking in Methamphetamine, Reckless Endangerment, Attempting to Elude, Failure to Affix Tax Stamp and Giving a False Address and held in Tuscaloosa County Jail pending a total bond of $1,533,00.00. Warrants for Unlawful Possession of Controlled Substance to be served on Weaver at a later date.

The video blow was posted by Raven Bosch on Facebook