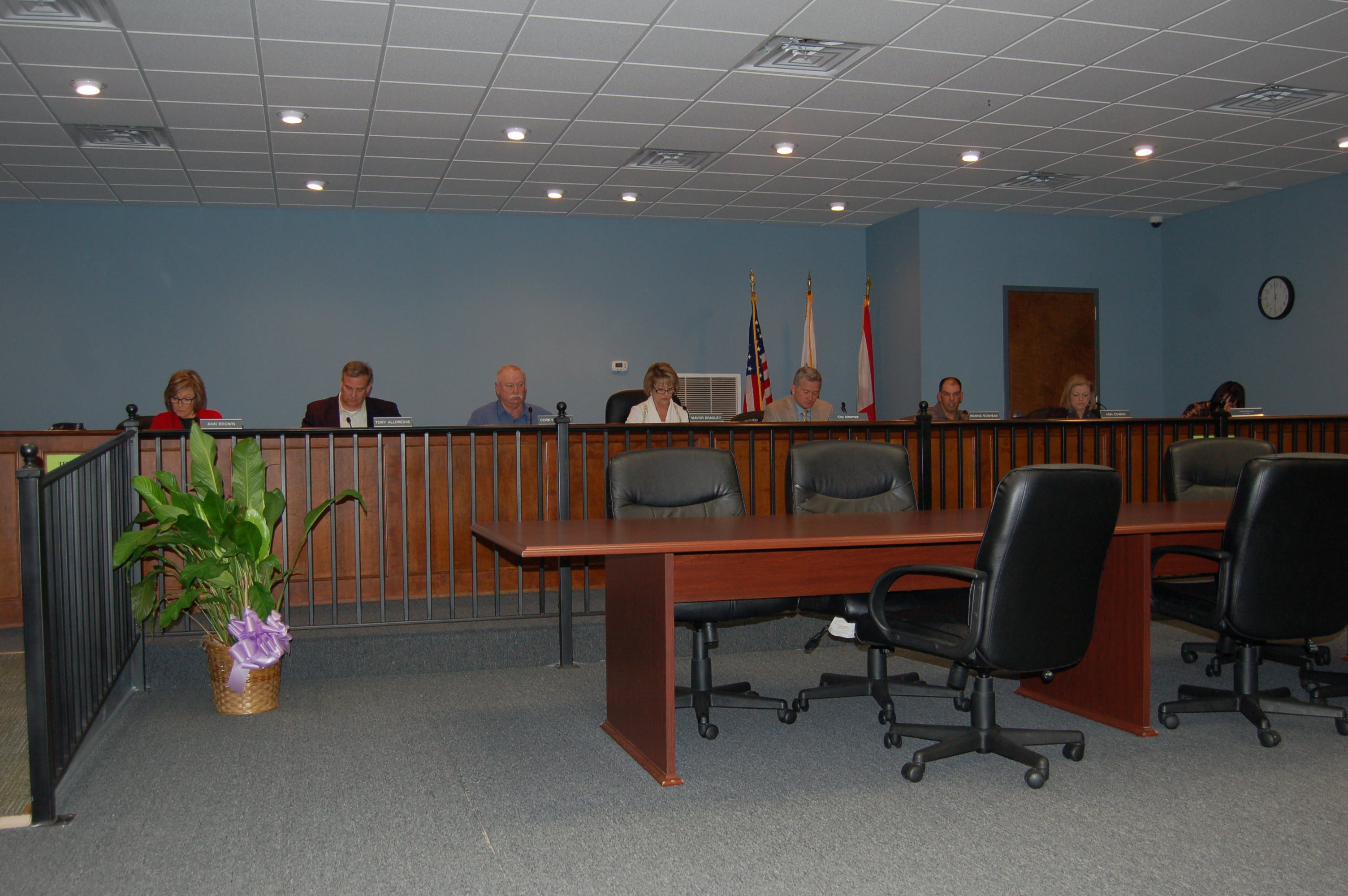 Argo — A moratorium on signs in the city was one of the topics at a regular meeting of the Argo City Council on Monday night. During that meeting they also discussed bids for garbage collection after several weeks of reviewing proposals. 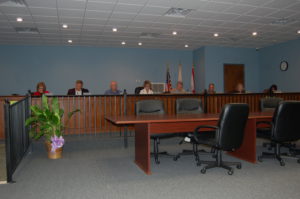 The Argo City Council at a meeting on March 26, 2018. Photo by Nathan Prewett.

In July of 2017, the council voted to set a moratorium on billboard signs in the city that may potentially hinder development.

At tonight’s meeting, Mayor Betty Bradley brought up concerns that, as the summer approaches, people may begin advertising for private sales such as garage sales and post signs on poles and stop signs. She said that these signs may contribute to clutter in the city and proposed the possibility of an ordinance that would require permits for putting them up.

A permit would allow a person to put up a sign for a certain time before requiring them to take it down, Bradley said. After some discussion, the council appointed members Corkey Massey and Ann Cowan to oversee ways that signs can be dealt with.

Afterwards, discussion turned to bids for garbage disposal. At a meeting on March 12, the council heard proposals from Waste Pro and Advanced Disposal, which has been contracted with before. Councilor Ronnie Bowman made a motion to rebid but it was not seconded and the motion died.

Councilor Ann Brown motioned to stay with Advanced Disposal and allow the mayor to negotiate with an alternate bidder for trash pick up, which can be voted on at another meeting, she said.

“I truly feel like, with the citizens that I’ve talked with, that trash pick up is very important to them,” Brown said. “And if we can lock in our [residential and commercial pick up] for a price of the next three years then the trash pick up is something we haven’t offered before and if we can negotiate that to an amount that pleasing to everybody I think that the majority of our citizens would be extremely grateful to have that.”

After discussion, the council voted and approved the motion, with the exception of Bowman who voted against it.

In other business, the council heard from Assistant Sheriff Billy Murray from the St. Clair County, who is running for reelection set for June 4. He said that he has been in office for 26 years as assistant sheriff and asked residents to consider voting for him. June 4 will be the primary election while Nov. 6 will be the general election for varying offices in St. Clair, including the school superintendent.

Interim Fire Chief Scott Payne addressed the council and said that the department has received smoke detectors provided by Alabama Governor Kay Ivey. The fire station will begin giving out detectors, free of charge, to citizens on Wednesday morning. Residents who are interested in having a detector installed can call the station at 205-352-2109.

In her comments, Bradley said that she has been in talks with Payne on bids for smoke detectors for the fire station. One bid offered $535 while another offered $1,500. The council approved the $535 bid, which the city will have to pay for out of general funds as insurance will not cover it.

Councilor Tony Alldredge reported on improvements being made to City Hall and the construction of the safe room, saying that advertising has been put out for bids on improving City Hally. He also reported that the city is currently working out contracts with the architect for the safe room and expects to have it resolved soon.

Brown requested that the council reschedule its May 14 meeting to 15 in order to allow them to attend a meeting by the Community Foundation, which will be meeting in St. Clair. The foundation is an organization that provides grants, which Ann Brown said can go into a library for the city. The request was approved unanimously.

The next Argo City Council meeting will be held on April 9 at 6 p.m.