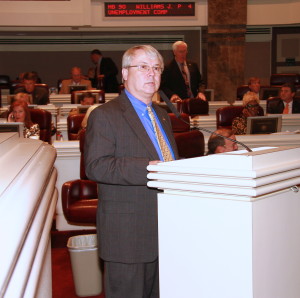 State Representative Jack D. Williams of Vestavia Hills has released a statement addressing the charges of corruption against him. He, along with lobbyist Martin J. “Marty” Connor and company owner G. Ford Gilbert were arrested on charges of bribery.

In the statement, Williams said that he has done nothing wrong:

“I have done nothing wrong, and once the facts are presented, I expect to be found innocent by a jury of all the allegations outlined in Monday’s indictment. I trust our judicial system and our electoral system; they have both protected individual rights for hundreds of years.

I have served honorably in the legislature for over a decade and will continue to do so until my term expires. I will also push forth my campaign for the Jefferson County Commission.

This statement is all I will say about the topic until I have my constitutionally-guaranteed day in court.”