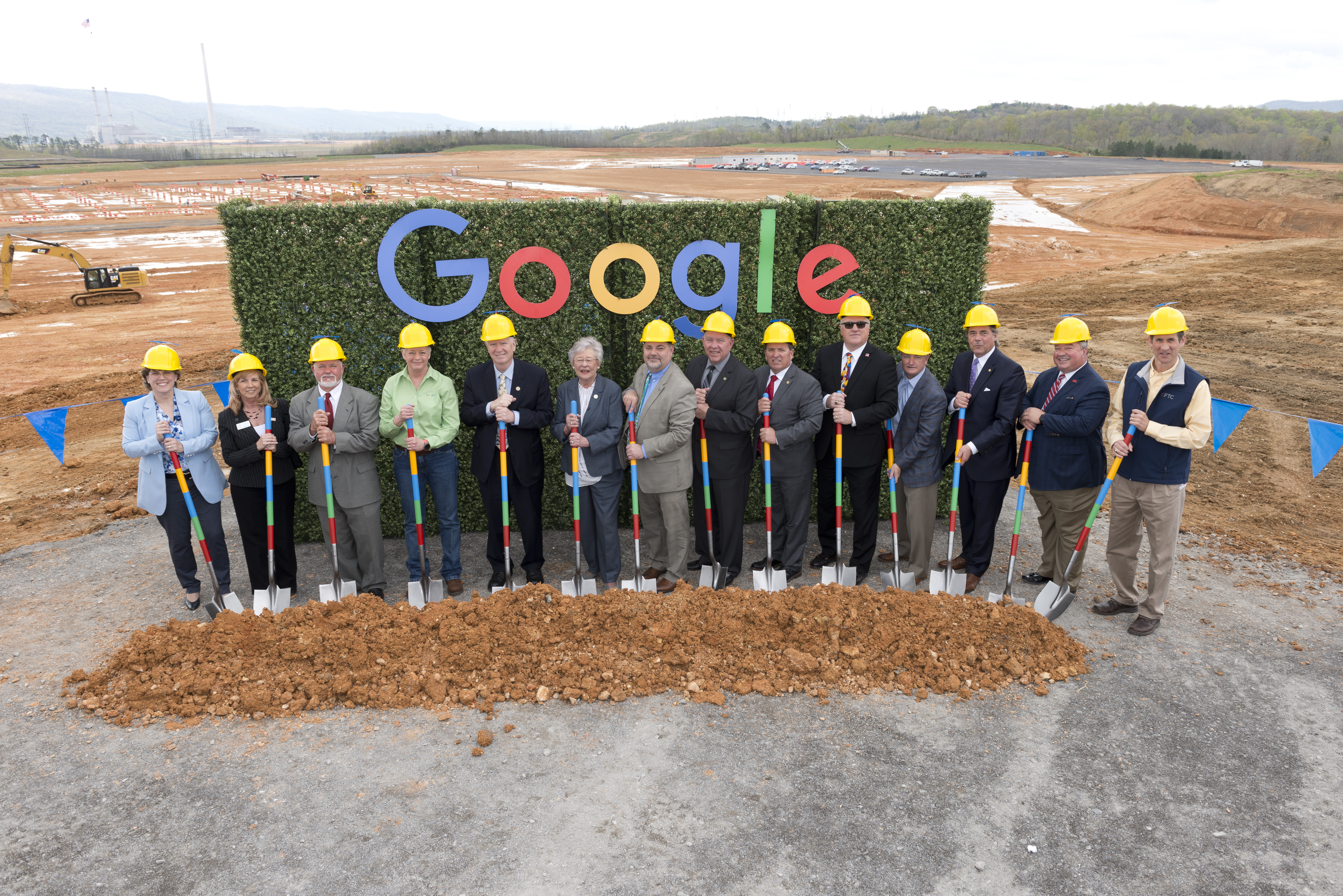 BRIDGEPORT, Alabama  – Google executives joined Governor Kay Ivey, Congressman Mo Brooks and state and local officials at a groundbreaking ceremony today to mark the official start of construction on a $600 million data center that will bring as many as 100 jobs to the northeast Alabama community of Bridgeport.

Google’s Jackson County data center will feature state-of-the-art energy efficiency technology. Google has also committed to purchase enough renewable electricity to match 100 percent of the facility’s power consumption. It will be the company’s 14th data center site globally and the eighth in the U.S., the second new U.S. location since 2007. The project was formally announced on June 24, 2015.

“Google is committed to investing in Jackson County to create new economic and educational opportunities for the people of Alabama and the surrounding region.” said Dr. Nan Boden, Senior Director and Head of Global Technology Partners for Google Cloud. “As a native Alabamian, I am so proud to be part of the effort to bring this Google data center to life in the coming months and years.”

The Alabama data center will act as an engine for internet traffic, operating in a network that keeps the Google search engine and company products such as Gmail and YouTube up and running for global users 24 hours a day, seven days a week.

Alabama officials said the Google data center will provide a major economic boost to the Jackson County area, beginning with hundreds of construction jobs as the facility is built. The data center’s highly technical workforce will number between 75 and 100, with the potential for growth in the future.

“As one of the world’s most dynamic and innovative technology companies, Google’s products touch billions of people across the globe every single day,” Governor Kay Ivey said. “We’re proud that Alabama is playing an important role in Google’s future growth, and we look forward to seeing this data center operation help power that growth.”

Google selected the Jackson County site because it offered the right combination of energy infrastructure and developed land. In addition, both state and local officials worked very hard to forge a partnership with the company and advance the data center project.

“I’m thrilled to join with Google today as they break ground on their data center in Jackson County,” said U.S. Rep. Mo Books (R-Huntsville). “It’s great to see companies like Google recognize what we in the Tennessee Valley have known all along — that we have a tremendous pool of talent in Northern Alabama and that this is a wonderful place to live and work.”

Once the Google facility opens, it will be Alabama’s first large-scale data center. The facility will also add a new dimension to Jackson County’s economy, which today has a heavy concentration of manufacturers producing items ranging from carpets to auto parts.

“This is a big day for Bridgeport because it helps our city in many different ways,” Mayor David “Bubba” Hughes said. “Having Google in our community will bring us great jobs and offer real opportunities for our young people. Google is a generous supporter of schools, and the company’s presence will help us recruit other high-tech companies. No doubt about it — this is a game-changer for us.”

As part of its commitment to local communities, Google also announced onsite that it would be donating $100,000 to the Jackson County School District for the growth and development of the region’s student STEM programs.

“We are so excited to become a part of Jackson County, and are committed to helping the community thrive,” said Brenda Standridge, Hardware Operations Manager and Site Lead. “I look forward to seeing how we will continue to work with community leaders to develop new opportunities for the children in this school district.”

“With this generous grant, Google has again proven itself a community partner and a supporter of the Jackson County School District,” said Kevin Dukes, superintendent. “We are thankful for their ongoing support of our children’s futures and are thrilled that they will now call this area home.”

Google’s newest data center is being constructed on over 500 acres adjacent to the site of the decommissioned Widows Creek coal-fired power plant once operated by the Tennessee Valley Authority (TVA). Google is partnering with TVA to source renewable power and will utilize the site’s existing electricity transmission lines to enhance the data center’s reliability and bring in clean power.

“The milestone we celebrate today is the result of government, business and community leaders working together with TVA to bring good jobs and quality investment to our region,” said TVA president and CEO Bill Johnson. “Google’s newest facility on the site of TVA’s former fossil plant at Widows Creek ensures that this storied location continues to be a landmark for technology and economic development for the people of North Alabama.”

Re-purposing the Widows Creek site and committing to match 100 percent of their electricity consumption at the Alabama data center with renewable energy purchases reflects Google’s longtime leadership on renewable energy. The company was one of the first to begin buying renewable on a large scale in 2010 and recently announced that it achieved 100 percent renewable energy for its operations in 2017.