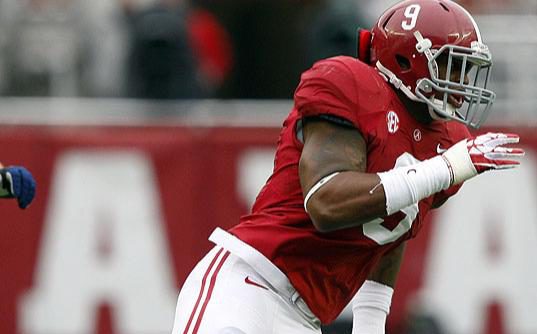 Reuben Foster, 24, who is a linebacker for the San Francisco 49ers, has been charged with three felonies after police arrested him for allegedly assaulting his girlfriend in February.

According to a press release by the Santa Clara District Attorney, the former Alabama Crimson Tide linebacker could face over 11 years in prison if convicted for his charges, which includes a large capacity magazine possession misdemeanor.

Foster is accused of attacking his girlfriend, allegedly dragging her by the hair through his house, throwing her out and hitting her on the head a number of times and leaving her with bruises and a ruptured eardrum. Afterwards, she is said to have called the police to report the incident before going to a hospital to be treated for injuries.

During a search of Foster’s home, police found a Sig Sauer 516 and a large capacity magazine that added a misdemeanor charge to the felony charges, which are: “domestic violence an allegation that he inflicted great bodily injury, forcefully attempting to prevent a victim from reporting a crime” and possession of an assault weapon.

He is scheduled to be arraigned today at the Hall of Justice in San Jose.