Tigers fight back for split with Hayden, Game 3 on Saturday

SPRINGVILLE —After dropping the first game of the series 5-3 on Friday afternoon, the Springville Tigers were facing elimination from the Hayden Wildcats on Friday night.

Taking the mound trying to keep the season alive for the Tigers would be Junior right-hander Ivan Cornelius. Cornelius was effective on the mound as he would hold the Wildcats in check. He allowed only 1 run in 6 innings, while striking out five. 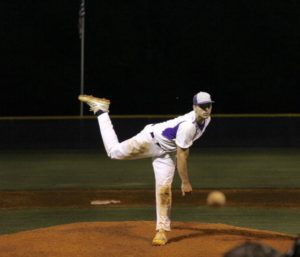 Cornelius also gave Springville the lead in the third inning, when he hit a massive home run over the centerfield fence. Hayden would tie it up in the bottom of the inning.

The Tigers would regain the lead in the top of the 5th inning on a balk. With runners on 1st and 3rd, Hayden’s Dakota Snow would be called for a balk, allowing the runners to advance, giving Springville a 2-1 lead. Snow would overcome the balk, and strike out the side in the 5th, to keep the score 2-1.

The Tigers would bring in Chase Isbell to close the game out in the bottom of the 7th, but Wildcats were not going down easy. A first pitch lead off, inside the park home run from Dakota Snow would tie the game up at two. Isbell would get out of the inning with out surrendering anymore runs and sending us to extra innings.

In the top of the 8th, it would be Isbell that had the hit that mattered most, a one out hit off the second base bag would score the go ahead run for the Tigers. In the bottom of the eighth a hit batter and a single would put the tying run on 2nd base for Hayden.

The Wildcats Nick Purvis would strike out swinging, but a passed ball would advance the tying run to third, and the potential winning run to second base. However, Isbell would stand strong for one more batter. A weak ground ball would end the ballgame, forcing a deciding game three on Saturday afternoon.

Springville will host Hayden on Saturday afternoon at 1 p.m. The winner of that game will face either Russellville or Lee-Huntsville next week in round three of the playoffs.