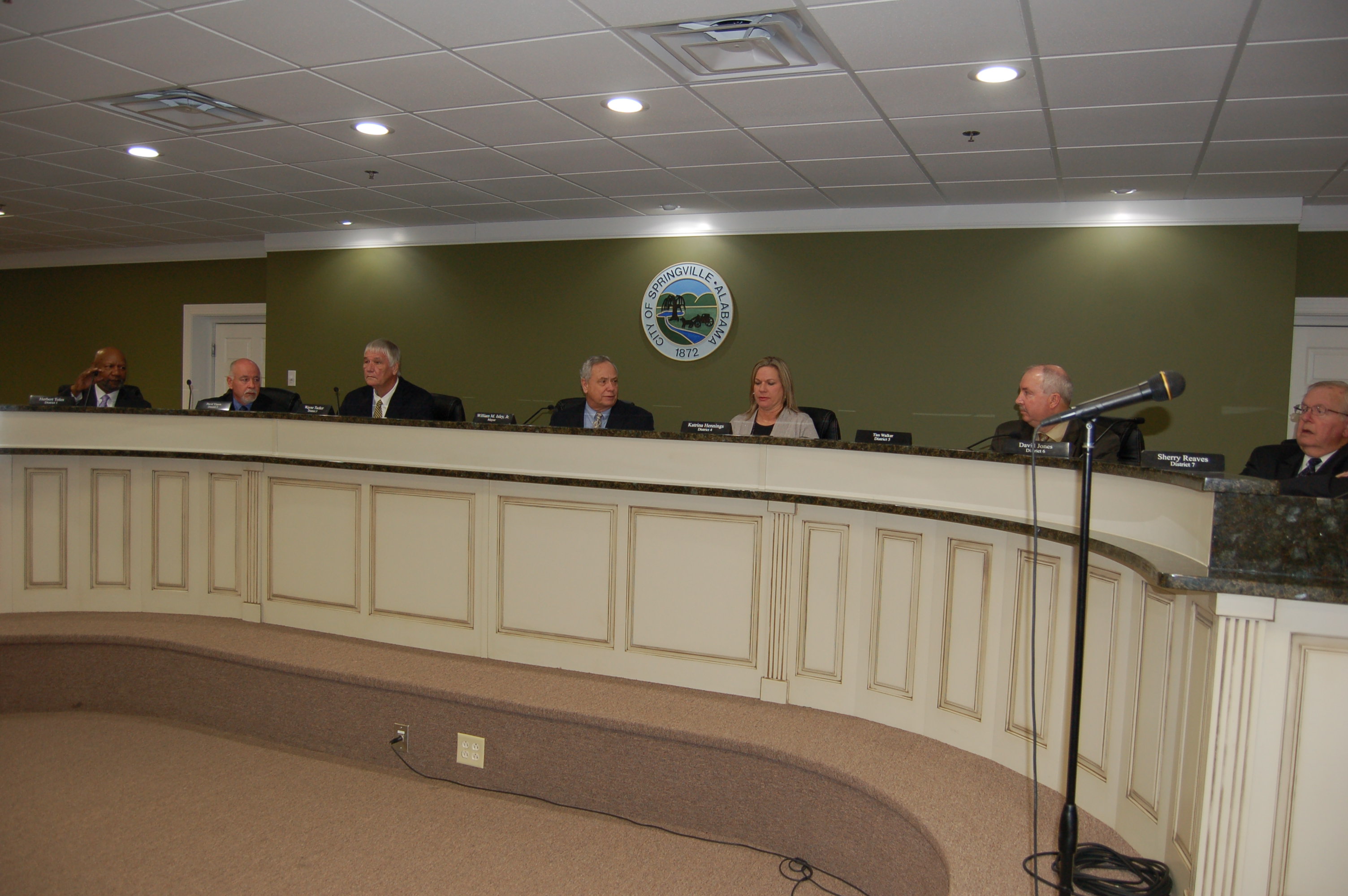 Springville City Council at a meeting on March 5, 2018. Photo by Nathan Prewett.

SPRINGVILLE — The Springville City Council held a meeting this afternoon a meeting originally scheduled for Monday, May 28, Memorial Day. During the meeting the Council tabled several matters until June 18, including a monument request, flooding issues at a Springville resident’s property and proposals to pave and stripe the library parking lot.

An issue with flooding at a private property on U.S. 11 in Springville was discussed. The building is a hair salon that has been experiencing flooding problems the owner believed was caused by road work. Public Works Director Earl Peoples said that the road near the building has not been changed recently and could not have caused it.

Peoples said that the area has been inspected for possible causes and solutions. A possibility was that water was coming off the roof of a nearby building and from sloping pavement.

“What we’re going to determine today is if the city has any ownership of the problem,” said Springville Mayor William Isley. “And if it does, we’re talking about spending tax dollars on private property and we’re going to think real hard about that before we do that. And these other alternatives that Mr. (Wayne) Tucker has come up with and some of the things he’s done already should help.”

After discussion, the council decided to table the matter until the June 18 meeting.

Attention turned to the paving and striping of the parking lot at the Springville Public Library.

“It needs to be done,” Isley said. “However, the request was made and given to me to try and push for that equipment because a U.S. congressman is visiting and we wanted to look nice. I don’t really want to push this through because there is another request related to the library area that we have between the buildings. If we construct something there we don’t need to have a striped, paved parking lot.”

There was a proposal for striping the lot for $20,000. A motion was made to table further discussion on this until June 18.

The Council tabled discussion on a proposal by a chapter of the Daughters of the American Revolution to erect a monument in the city. The possibility of approving the request was delayed until June 18 when members can further research it. Hill reminded the council that a state law requires that any monuments in a city must stay up indefinitely unless the law changes.

Afterwards, the council granted $3,000 to Fire Chief Richard Harvey for personal protective equipment and uniforms. The money will be budgeted through the fire tax revenue. Part of the reason for the expenditure was because of new personnel coming to the fire department.

City Attorney James Hill gave a report on the ongoing litigation with MacDonald Farm in which he said that progress has been made in the case and that some documentation may have been received that could bring it to a conclusion.

The next Springville City Council meeting will be held on June 4 at 6 p.m.