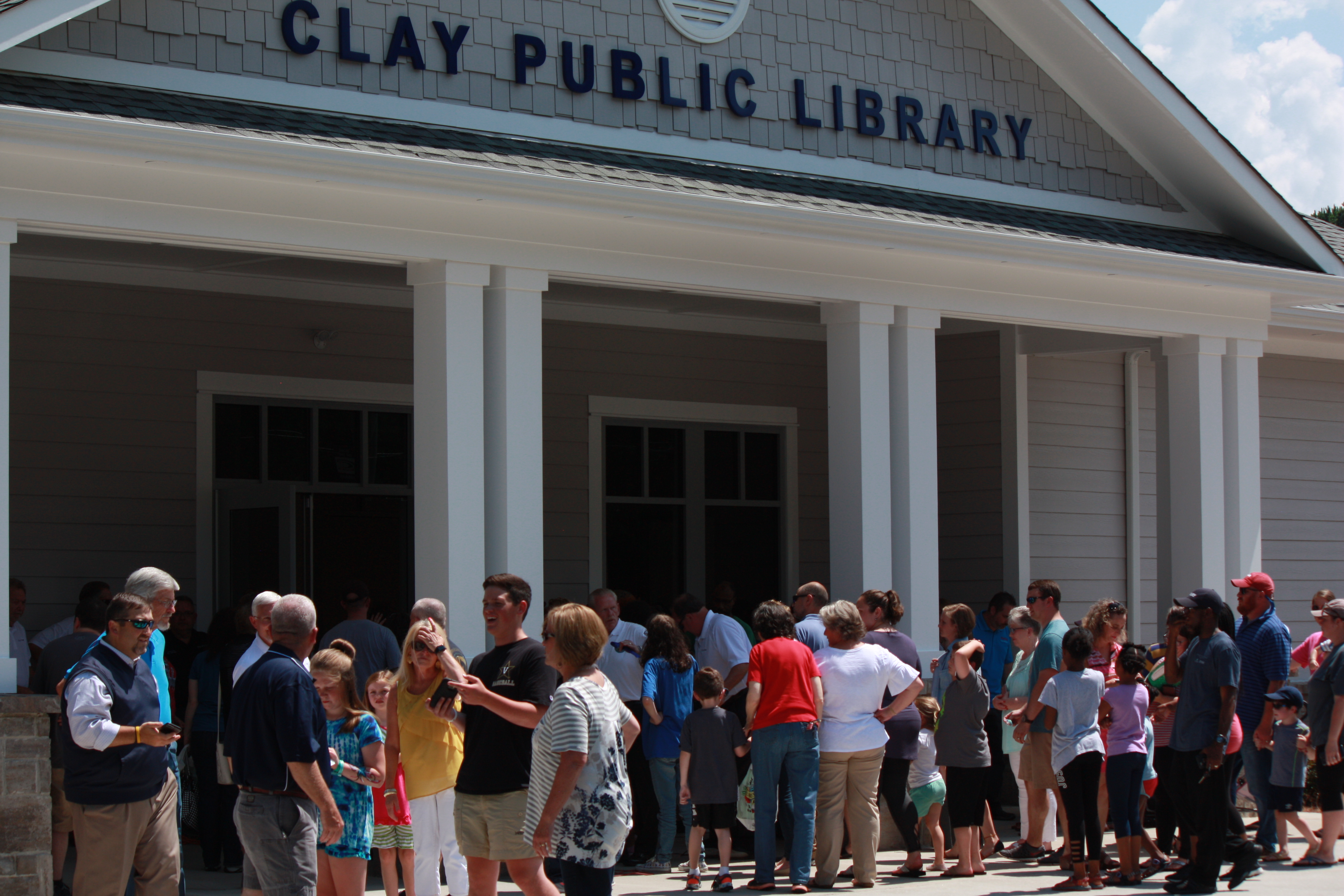 By Crystal McGough, The Trussville Tribne

The new Clay Public Library opened its doors to the community for the first time Saturday, June 2 at 2 p.m. with a ribbon cutting ceremony leading into the opening day of the Summer Reading program.

“We are really excited to be here and we’re super excited to have Summer Reading started at this new location,” Clay Library Director Holly Flores said. “We are excited to be in this new building, built by the city. We thank them for that. We will miss our old building, but we think that you will see this is going to better for us.”

The event started by commemorating a World War II Veteran’s memorial bench that sits in front of the library, which was sponsored by actor and Clay native Joey (Clayne) Crawford and his family.

Crawford’s grandfathers, WWII veterans Bernard Crawford and William “Billy” Aldridge, were both present at the dedication. 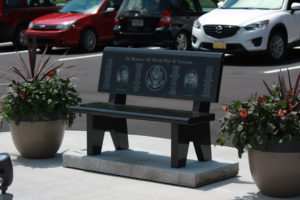 A veterans memorial bench outside the new library as donated by Clayne Crawford.
Photo by Matt McGough

“We’re going to honor them today, thank them for their service,” Mayor Charles Webster said. “We are honored to have them as Clay citizens. I’ve been knowing both of these gentlemen for a long time. It’s just an honor and a privilege to have them here.”

Aldridge spoke a few words to the crowd about his fellow veterans, including the fallen soldiers who never made it home from the war.

“We’re the last two living in this community,” he said. “In the beginning, there were many, that’s on that plaque right there. We had three killed in action that did not come back.”

After the dedication of the memorial bench, there were two separate ribbon cuttings for the opening of the library. The mayor and the Clay City Council cut the first ribbon, followed by a second ribbon cutting by the library board.

“This is a vision that I’ve had for about six years now, to have this library here right in front of the elementary school so more kids could have access to the library,” Webster said. “It’s going to be great for the schools to be able to use this as part of their program, too, so we’re excited about that.”

Prior to the library board’s ribbon cutting, Library Board Chair Jane Anderton thanked the city council and reminisced on the history of Clay’s public library. 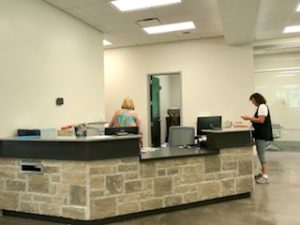 “Several years ago, I think, the first meeting I attended was not in your administration at all, but it was about the library down there (at the Jayford Ware House) and the importance of being a part of the Jefferson County Cooperative, because at the time they were thinking, ‘should we or should we not,’” she said. “As a person who has gone to the library in Jefferson County for over 25 years, I cannot tell you how important it is to have a local library. The local library is to help you and your family use all of the resources that are available. We just have a wonderful county system. So I appreciate that council for seeing the future and seeing that we needed to be a part of that cooperative, and then for continuing to support the library as you do, thank you so much.”

In reference to the historic Ware house, which formerly housed the library, Webster made a public announcement that the house would not be demolished.

“This is to let everybody know, we’re not going to tear the house down,” he said. “So that should ease everybody’s minds. I know there’s a lot of things on Facebook you hear, so I’m going to state the facts for you today. The house will not be torn down, but we haven’t decided what venue it will be yet, so if anybody has any ideas, we’re open to suggestions.”

“This is a great day when you have something like this for the community,” Knight said. “I remember as a kid, when the book mobile came to my neighborhood, that was the most exciting thing ever. But this, you can come here and read, research, do whatever you can and enjoy your community. Congratulations Mayor and the council, this is a great day for you. Beautiful building.” 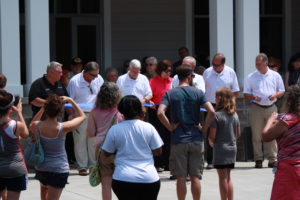 The Clay City Council cuts the ribbon at the new library opening.
Photo by Matt McGough

After the ribbon cuttings, the Summer Reading kickoff commenced inside the library with face painting, temporary tattoos, a photo booth, rock painting, free popcorn and more. Citizens communed in the new building, browsed the bookshelves, enjoyed the children’s play area and modern-styled seating areas, and checked out resources for the first time in the new building.

“I hope you are all excited about the new library,” City Councilor Becky Johnson said. “We are excited and we’ve looked forward to this. We just hope it grows and becomes one of the largest little libraries around.”

Also on June 2, prior to the library opening, Clay held its eighth annual Cosby Lake Fishing Rodeo with an estimated 200 people in attendance.

According to Webster, there was some trouble with the moss in the lake, but he expects that problem to be solved after the city has Cosby Lake dredged.

“I think we’ll probably begin our dredging project next year,” he said. “I’m hoping it will be started about this time next year. But we had a good turnout. The kids had a lot of fun and caught some fish.”