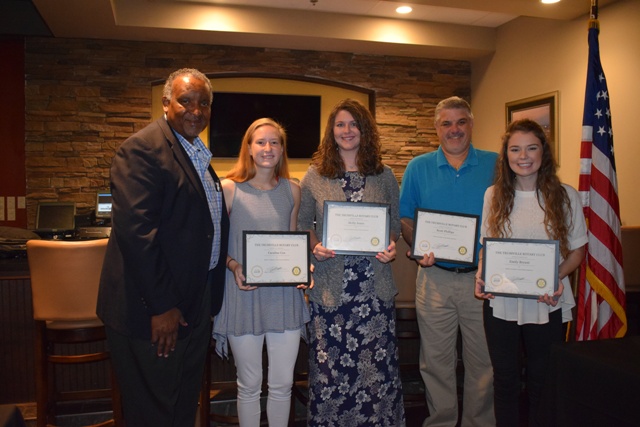 Trussville Rotary announces May students, teacher of the month

The Don Haisten Student of the Month from HTHS is sophomore Caraline Cox. Caraline is a member of the tennis, basketball, and volleyball teams.

She is a part of the Pink Engineers, Science Olympiad, FBLA, Serve Team, Mu Alpha Theta, and National Honor Society, and is an Orientation Assistant. She was a March Student of the Month, made the A-Honor Roll, and received the Husky Award for her leadership in volleyball. Her selection for Teacher of the Month is Molly Jones, her math teacher.

Says Caraline, “Ms. Jones has meant so much to my success as a student. She is always helpful and going the extra mile to make sure I understand math.”

“This year, she has also been the amazing sponsor for sophomore board. She is always so organized, kind, and positive, which really helps to put a smile on my face when I pass her in the halls.”

The Student of the Month from CCHS is senior Emily Bryant. Emily is a member of the CCHS band, where she serves as the flute section leader and also as a drum major.

She is vice-president of Mu Alpha Theta, President of HOSA, and is a CCHS ambassador. She also serves as chaplain of the National Honor Society. She has been in the top 2% of her class for the past four years, and this year she received the Cougar Character Award, the Ronald Reagan Leadership Award, and the Shelley Martin Leadership Scholarship, and is an honor graduate.

She also works part-time at Carroll Pharmacy and would like to attend pharmacy school. Her Teacher of the Month is ScottPhillips, her pre-calculus and pre-AP calculus teacher.

“Mr. Phillips was always so encouraging and helpful to me when I struggled and he helped me figure out challenging calculus problems. In his class, there was no such thing as a dumb question,” said Emily.

The Club meets at the Trussville Civic Center located 5381 Trussville-Clay Road in Trussville at 7 a.m. on Wednesday mornings.

For more information on the Trussville Rotary Club Daybreak, or to help with one of our projects, please email Diane Poole at diane.poole@trussvillechamber.com.