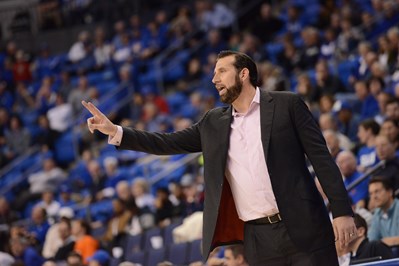 BIRMINGHAM — Since his arrival, Samford head coach Scott Padgett has consistently stockpiled talent for his Bulldogs’ basketball team and this season’s signing class proved to be no different.

“This is a very big group,” said Padgett. “We really tried to address some of our weaknesses with these guys and I think we’ve definitely filled those voids. I know that size, athleticism and toughness have all been addressed with this class. The way we play will also be a lot different from last year. We have a lot more versatility now on the offensive end, so we won’t have to rely so much on spot-up shooting.

“Don’t get me wrong, we have a lot of guys who will be able to shoot the three this year, but now if the defenders run at them, they will be able to put the ball on the floor and take it strong to the rim. We also have a lot more playmakers now than we did last season, so I believe our offensive attack will be just as strong. The difference is that we will be a lot better on the defensive end as well.”

Robert Allen, a 6-foot-8, 200-pound forward from Orlando, Florida, comes to Samford from Edgewater High School where he proved to be a three-year varsity starter for the Eagles. He helped lead EHS to a pair of Final Four appearances and also exceled off the court as a 3.0 student and leader on campus.

Jalen Dupree, a 6-foot-8, 235-pound power forward from Cordova, Tennessee, comes to Samford from Murray State University, after transferring following his sophomore season. He will redshirt the 2018-19 campaign due to NCAA transfer rules, but will be eligible as a junior with two years remaining to play for the Bulldogs.

Logan Dye, a 6-foot-8, 235-pound power forward from Haleyville, comes to Samford as a true freshman after starring at Haleyville High School throughout his prep career. He concluded his high school career ranked as the No. 4 prospect in the state per HoopSeen. Dye was also chosen to compete in the annual Alabama-Mississippi All-Star Challenge.

Steven Fitzgerald, a 6-foot-4, 205-point shooting guard from Somerset, Kentucky, will join the Samford roster this season after starring at Pulaski County High School. Rated a 4-star prospect by ESPN, Fitzgerald was also the top-ranked recruit in Kentucky.

Myron Gordon, a 6-foot-3, 180-pound guard from Bordentown, New Jersey, comes to Samford from Harcum College where he spent the previous two seasons starring for the Bears. He closed out his illustrious two-year career at the school ranked fourth all-time in scoring with 1,023 career points.

Stanley Henderson, Jr., joins the Bulldogs out of Middle Georgia Prep where he averaged 16 points, 13.5 rebounds, three assists and two blocks per game. The 6-foot-6, 210-pound small forward is a native of Jonesboro, Georgia, who possesses dynamic leadership skills and proved to be the Team Captain at Middle Georgia Prep.

Deandre Thomas, a 6-foot-4, 190-pound shooting guard from Richmond, Virginia, comes to Samford from the Millwood School where he shined as a high-energy, long and athletic guard for the Bobcats during his prep career.

Samford’s seven highly-touted signees this season will join returning letterwinners Stefan Lakic, Kevion Nolan and Josh Sharkey on the team’s 2018-19 roster. The Bulldogs will also boast the incoming talent of transfers Brandon Austin and Ruben Guerrero, as well as redshirt freshmen Luke Touliatos and JT Mumber, who will all be eligible to compete this season.