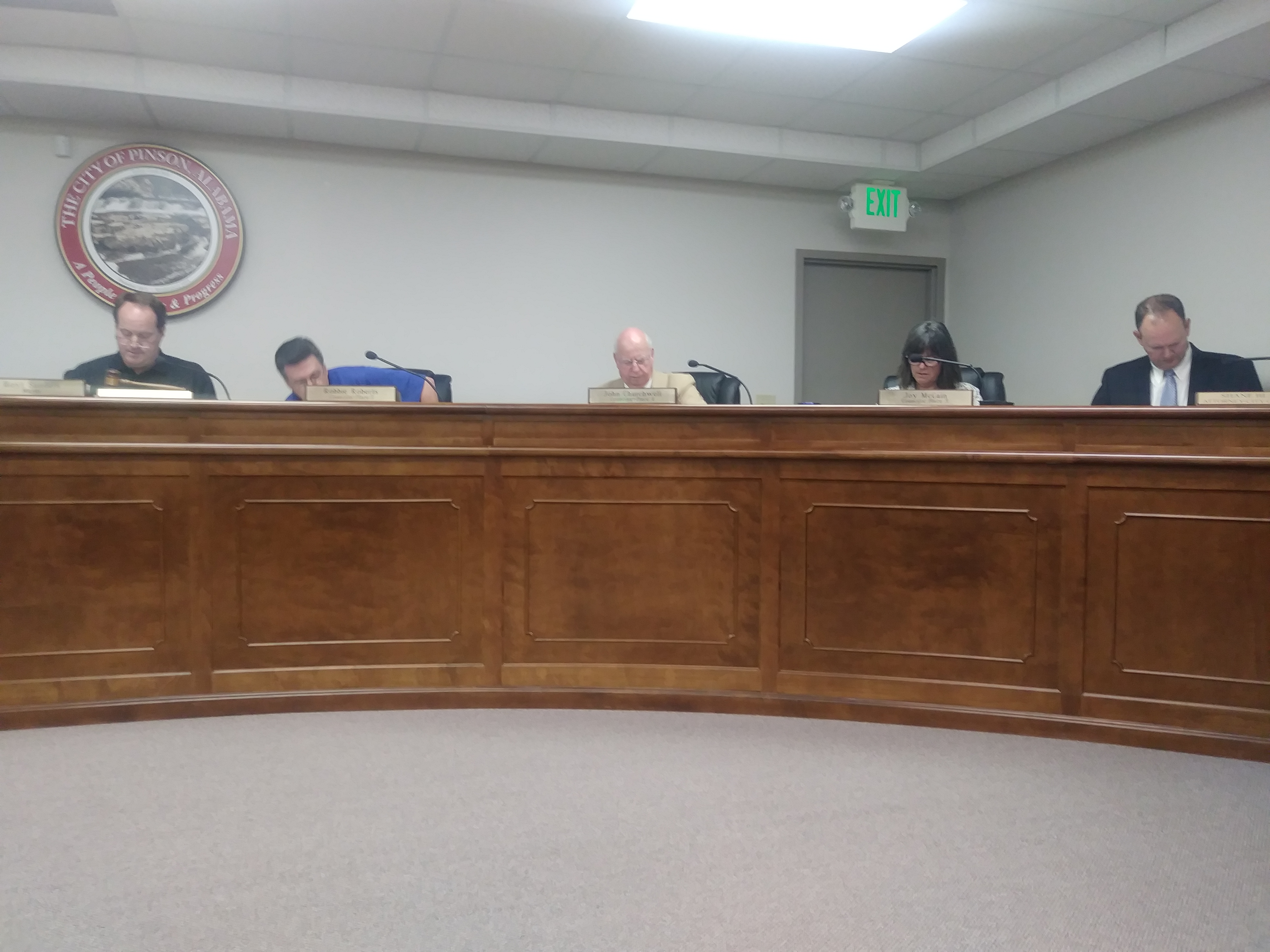 Pinson City Council at a meeting on June 21, 2018. Photo by Nathan Prewett.

PINSON — At a regular meeting on Thursday night, the Pinson City Council unanimously approved the release of funds to Palmerdale, Glenwood and Center Point fire districts for firefighting equipment and materials, including rescue litters for carrying people during emergency situations.

Garner reported that last year the district purchased a side by side vehicle with city funds and was displayed outside City Hall for viewing after the meeting. He said that the district has applied for a grant to purchase three Lifepak 15 heart monitors and three automatic CPR machines.

Following Garner was West, who said that Pinson has been assisting the district over the years with cost-sharing opportunities for products such as fire hoses, ATV, chainsaws and Lifepaks. Recently the district purchased another rescue truck that was placed at Station 2, covering Pinson.

Now the district is trying to purchase other equipment and has asked the council to consider in assisting. Among the items that the district is seeking to acquire are: air-bag system, individual thermal imager, strong arm extrication device, electric fans for ventilation and station and ground infrastructure remodeling.

“All this equipment, it’s stuff that’s all needed,” West said. “We try to prioritize everything.”

Afterwards the council approved the purchase of Stokes baskets. Pinson Mayor Hoyt Sanders said that he was approached by West a month ago on purchasing Stokes baskets or rescue litters that can be placed at City Hall and in the fire stations. Three baskets were approved for $2,000 in total.

Sanders gave a report on the status of a storm shelter to be constructed in Palmerdale. He said that the design for the shelter is nearing completion.

“We do expect that to kick off in bids sometime in the second half of (2018),” he explained. “Which does tie in with our discussion and approval last time. What we’ll probably do just to make absolutely sure is move our (certificate of deposit) into weekly savings for six months.”

He said that FEMA will pay the city back 80 percent.

The council approved the recycling scheduling change mentioned at the June 7 meeting. Beginning in July Pinson will be divided into northern and southern halves for recycling dates, which will take place every other Wednesday for each half. Details of the schedule along with maps will be posted on the city’s website in July.

“This should serve our citizens better,” Sanders said. “I’m glad people are indeed using the recycling.”

In the public comments portion, two speakers addressed the council. Musician Diedra Hurdle-Ruff asked the council to consider Music in the Park for this summer as it did last year.

The second was Patti Chandler, who brought up concerns about a cemetery just outside the city limits in Birmingham that she said was in disarray. Sanders said that the city has alerted Birmingham to it but he was not sure if they could take action on that but City Attorney Shane Black said that he would research the matter.

The next Pinson City Council meeting will be held on July 5 with pre-council at 6:30 followed by the regular meeting at 6 p.m.