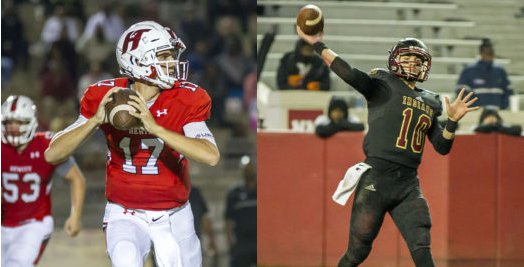 National Impact: Huskies and Indians are ready for their close-up

On Saturday August 25th, Pinson Valley and Hewitt-Trussville will open up their seasons in dramatic fashion on national television as both will play at the Hoover Met and will be featured on ESPN. Quite a way to open up the high school football season in these areas.

I decided to reach out to both head coaches to ask them about the game, its lead up and the impact a game like this can have on a high school football team. There were a ton of similarities as you might imagine but also some difference in the outlook of the game. If anything, both coaches know exactly how big of deal this is.

Depending on the level of football you’re watching, television exposure means different things. The NFL money is spread evenly amongst the teams so being the only game in town so to speak on a Monday or Thursday night carries plenty of opportunities to shine as well as bragging rights.

In college, players have an opportunity to showcase their skills throughout Saturday but being in that night game on ESPN puts you and the program you play for front and center. Pride, NFL coaches watching, the totality of the moment, it’s all there.

But in high school, players aren’t playing for contracts or for a chance to play in the NFL. Not yet at least. It’s the first step in a long journey to be presented with an opportunity that few high schools get on the biggest of stages. On one hand, you have the game itself that carries a chance for the team and individuals to shine. On the other hand, these games will put two great communities front and center for the entire world to see.

I first spoke with Hewitt-Trussville head coach Josh Floyd to get his take on the impact of this game and what it means. “First, it gives these kids an opportunity of a lifetime. It’s an experience that they will keep with them forever and talk about forever. More so than that, this is an opportunity to show off our community, our band, the cheerleaders, and all the things that make this community so great.”

As for football, Floyd and his team are used to the media as the Huskies had over 100 college scouts and coaches show up for their spring game. “Our guys know exactly what’s on the line here and we as coaches have had to do very little when it comes to motivating these guys. They’re ready,” Floyd said.

The Huskies will play Cedar Grove high school out of Georgia in the late game beginning at 2:30.

As for Pinson Valley head coach Patrick Nix, the opportunity to play on ESPN also tells him a lot about what people think about high school football in the state of Alabama as the Indians will kick off the day against the Hoover Bucs at 11:00 a.m.

“It’s always good to see a team from Alabama being featured in a game like this but to have two teams from the same state and a third playing on the same day tells you just how much people realize the amount of talent in the state,” Nix told me.

Like Floyd said, Nix echoed the impact of the game showing off the kids and the communities that these two programs represent. Communities that will no doubt show up in droves to watch while probably leaving their televisions on at home just to spike the ratings.

As for Nix’s team, “They know how important this game is not just because it’s a great program in Hoover but also that plenty of coaches and scouts will be watching too. We have two former college coaches that have over 40+ years of experience that will tell you the Saturday we play on is the last Saturday those guys had off before the college season began and they will tell you that most of them would find a high school game to go watch. Being on ESPN makes it even easier for them.”

Two teams poised for big years, two great communities, and two coaches that understand the importance of both going into that Saturday will be on full display in two months time. When Pinson Valley and Hewitt-Trussville take the field on that Saturday, two great football games will no doubt be played but you’d be hard pressed to find two head coaches that know just how much this game means on a much broader scale than football and that makes this opportunity even bigger and better.