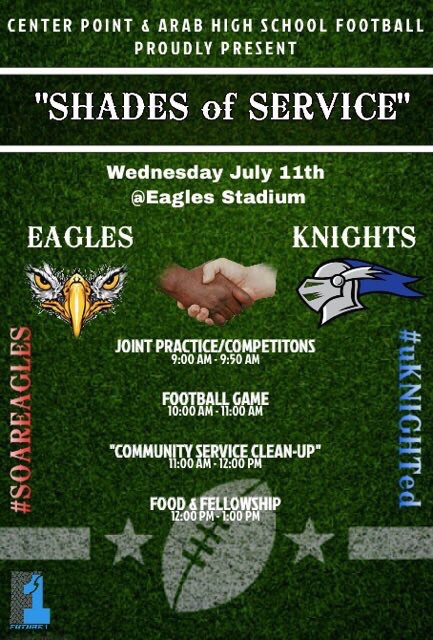 CENTER POINT— George Bates, who is the head coach of the Center Point High School football team, will be hosting a joint camp and community service event with Arab High School called Shades of Service on July 11.

“I contacted the Arab coaches and we wanted to do a camp but we wanted to do something different. With all the stuff going on locally and nationally let’s use football to promote some change,” Bates said.

Center Point is a predominantly black school while Arab is predominantly white and the goal of the camp is to have football competition to start but show signs of unity once the practice is over.

To start off the day there will be a joint practice followed by a simulated shorts and helmets game starting at 9 a.m.

“We’ll start out with some practice stuff for both teams and we’ll simulate a game in shorts and get after it a little bit,” Bates said.

At 11 a.m. there will be a unity cleanup in which players from both teams will come together and go out in the community to pick up trash and help neighborhoods with tasks to help promote unity off the field.

“The community will see that color doesn’t stop us from being humans, we’re showing the youth that they can be the change. There will be Arab players and Center Point players sprinkled with each other and they’re gonna get to know each other and make a difference in the area all at the same time,” Bates said.

After the clean-up, there will be food and fellowship from noon till 1 p.m.

Coach Bates believes the camp and community clean-up will benefit the players in both schools and also the coaches.

“I want this to be an every year event during the summer, this has potential to be something great,” Bates said.