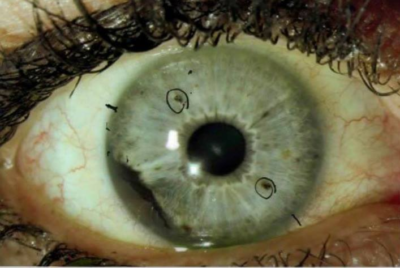 AUBURN — Auburn University made a statement on Tuesday announcing their plans to fund research on Ocular Melanoma, a rare form of eye cancer, affecting over three dozen cases of former Auburn University students from 1983 to 2001. 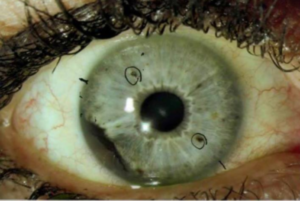 Growths initially present as a benign nevus, or freckle, that can be examined during a dilated eye exam (as seen in the image above)

According to the Auburn Ocular Melanoma Facebook page, uveal melanoma is the most common cancer in the eye, but overall its incidence is extremely low, known to affect only 4.3 per 1 million people in the U.S.

Trussville Drs. Zack and Beth Steele explain that the uvea is the pigmented part of the eye, made up of three different structures: the iris, or colored part of the eye, the ciliary body which produces the fluid inside the eye, and the choroid, responsible for much of the blood supply to the back of the eye.

On July 31, the Auburn University’s Office of Communications and Matketing, shared that collaborative communications efforts with experts around the nation on melanoma have been made along with the university’s ongoing efforts to work with Alabama public health officials.

“These communications are ongoing as experts assist in determining what next steps should be taken in the best interests of the patients who are battling this cancer,” the statement read. “We have also provided informational resources and updates to the campus community and beyond, so those concerned have the latest information that is available.”

Auburn also announced its plans to fund geospatial research, one of the arms of research, in regards to the potential links to Ocular Melanoma.

“We are engaging geospatial research experts to gather and analyze data that, among other things, will explore potential links to ocular melanoma in this area, none of which have been definitively found in any previous studies for this very rare cancer. This could help indicate the right and additional paths for future research in finding causes and treatments in the hope of developing a cure.”

Dr. Fred Kam, who has a medical clinic on Auburn’s campus and is the university’s spokesperson for Ocular Melanoma case, shared the reasons behind, what he believes, the need for funding the geospatial study.

“The experts believed this should be one of the first things to be done,” said Kam. “Secondly, the process to obtain information from the state has been slow and challenging. Thirdly, it is the right thing to do.”

Kam explains that prior to 1998 there was no electronic data collected for university employees, so gathering this information for the state will take much longer. In addition, Kam shares that student demographic data was not collected because it wasn’t a requirement.

“I communicated some urgency to move things forward,” said Kam.

Auburn University will fund between $35,000 to $50,000 for the first phase of the large study into the cancer which has been found in numerous Auburn graduates. This amount matches more than the $22,000 also raised in donations to fund the study. 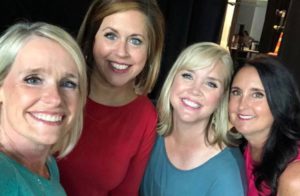 From left to right: The photo is of Allyson Allred, Ashley McCrary, Juleigh Green, and Lori Lee who are all Auburn Alumi and diagnosed with Ocular Melanoma.

According to the Auburn Ocular Melanoma Facebook page administrator, Ashley McCrary, who was also diagnosed with Ocular Melanoma in 2012, there have been three dozen cases identified, twenty-five confirmed on the state cancer registry.

“This has been a busy day,” said McCrary. “There will be three arms to this study including geospatial, germ-line (or genetic), and environmental. The reason for the range in funding is because it contingent of how many are in the study.” But she shares that Auburn is willing to do whatever it cost.

”Many people have been saying that Auburn is not responding,” said McCrary. “This is not the case. No one has reported it.”

McCrary shares that in the last two weeks there have been five additional cases that have been identified. Those cases are in the process of being verified with the state registry.

”There are problaby more that have not been reported to the state’s cancer registry,” she said.

According to the National Caner Institute, physicians need this data to learn more about the causes of cancer for early detection. Because cancer registries provide this type of data, they are valuable research tools for those interested in the etiology, diagnosis, and treatment of cancer.

Dr. John Mason with Retina Consultants of Alabama, who is the only ocular oncologist in Alabama, is assisting Dr. Kam in leading the research investigation.

“My opinion is research is the right thing to do,” said Mason. “I appreciate that Auburn is willing to help and congratulate them for stepping forward with funding. We will need additional funding from other sources and hope that others who want to make a difference will step forward so the additional studies can be done.”

According to Mason, Auburn has agreed to assist with the funding of the geospatial aspect, but funding is still needed for the genetic analysis.

“We will enlist the help of other worldwide experts to complete a thoughtful and thorough investigation,” said Mason. “Dr. Kam and I agree that the patients deserve such an investigation.”

McCrary shares that having an eye exam is important.

If you or someone you know attended Auburn University during 1983-2001, it is especially important to get your eyes checked right away.

For more information and to keep up with the individuals affected by Ocular Melenoma, please visit the Auburn Ocular Melanoma Facebook page.

If you would like to make a donation for this Research you may do so at eyepatchchallenge.org.