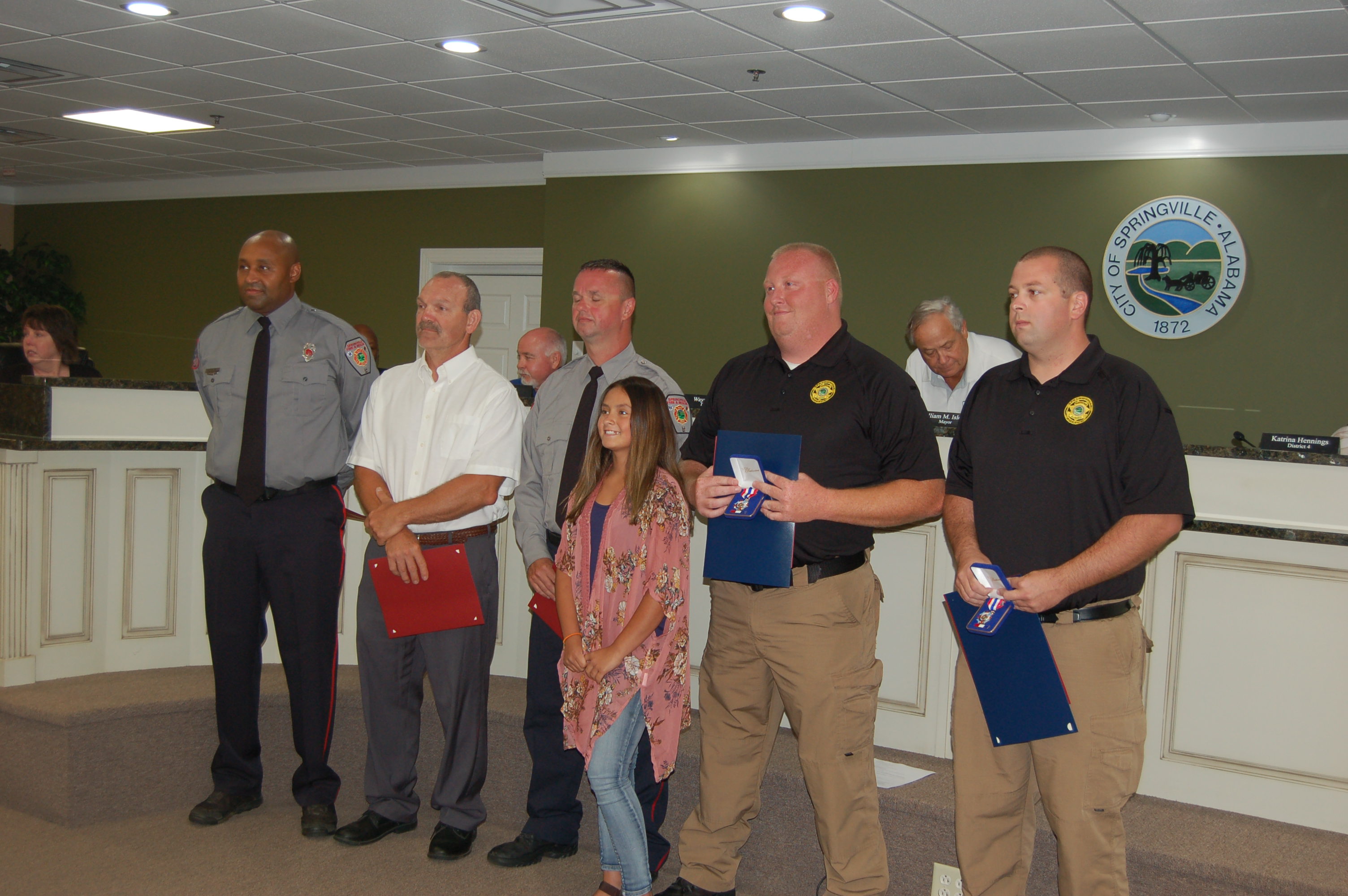 Police, firefighters who saved girl in May commended at Springville Council meeting

SPRINGVILLE — First responders were recognized during the Springville City Council meeting Monday evening for their efforts in rescuing a little girl. 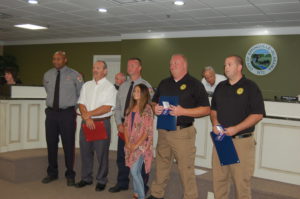 On May 12, Kayden Russell was riding with her mother on Interstate 59 when the vehicle left the roadway and into the waist-deep water of a nearby creek. Kayden was trapped underneath as Springville Police officers responded to the scene. They managed to extract her and gave her CPR until several members of the Springville Fire Department arrived and took over.

It was a close call for Kayden, who made a full recovery. During the meeting at Springville City Hall, officers and firefighters received commendations for their actions on that day and a recognition from Alabama Governor Kay Ivey’s Office that was read aloud by Senator Jim McClendon, District 11.

Officers Jamie Nolin and Mike Long were nominated for the Alabama Lifesaver Award and Alabama Police Officer of the Year. In addition to police officers Nolan and Long, first responders who came to the scene on May 12 also included ONewman Davis, Anthony Kormolis, and Robert Crawford from the fire department.

School resource officers became a subject of discussion afterwards in which Mayor William Isley reported that there was a plan in the works to add more officers in six St. Clair cities for security. However, he said that there were some concerns about it and that he has been talking with Billy Murray, who won the primary election for the St. Clair County Sheriff’s office.

Isley said that the county commission is asking the cities to appropriate funds for additional officers in Ragland, Ashville, Odenville, Springville, Pell City and Moody. The plan, he explained, is to continue with two full-time school resource officers at Springville High School but add four part-time security officers. They will work at the Ragland and Moody high schools as well.

“Each school will have an officer on location a minimum of four days per week,” Isley said. “Mr. Murray confirmed that today. There will be times during the year that officer may not be available at the school. That could be for many reasons – could be illness, could be family matters, could be at another school for another matter, and a school could be left without a security officer.”

“On those days, the sheriff plans to send on a monthly basis to the police chiefs in each city the days that these officers are scheduled to work, so that they will know the days that there will be nobody at a specific school, and if that city chooses to send someone like we are prone to do, we can send somebody on those days. They don’t necessarily have to fund an SRO on a daily basis unless we choose to do so. We can simply fund the $7,500 they’re asking for and also send one of our own officers on duty on a day when we know there’s nobody at the high school.”

The council unanimously approved the $7,500.

Later in the meeting, the council considered a bid that was received for paving of the road and parking lot at Veterans of Foreign Wars or VFW. The bid is for the labor involved in paving the road while the city will purchase asphalt elsewhere at an estimated $20,000 – $25,000. The bid for labor was accepted from Massey Asphalt Paving for $52,064.50.