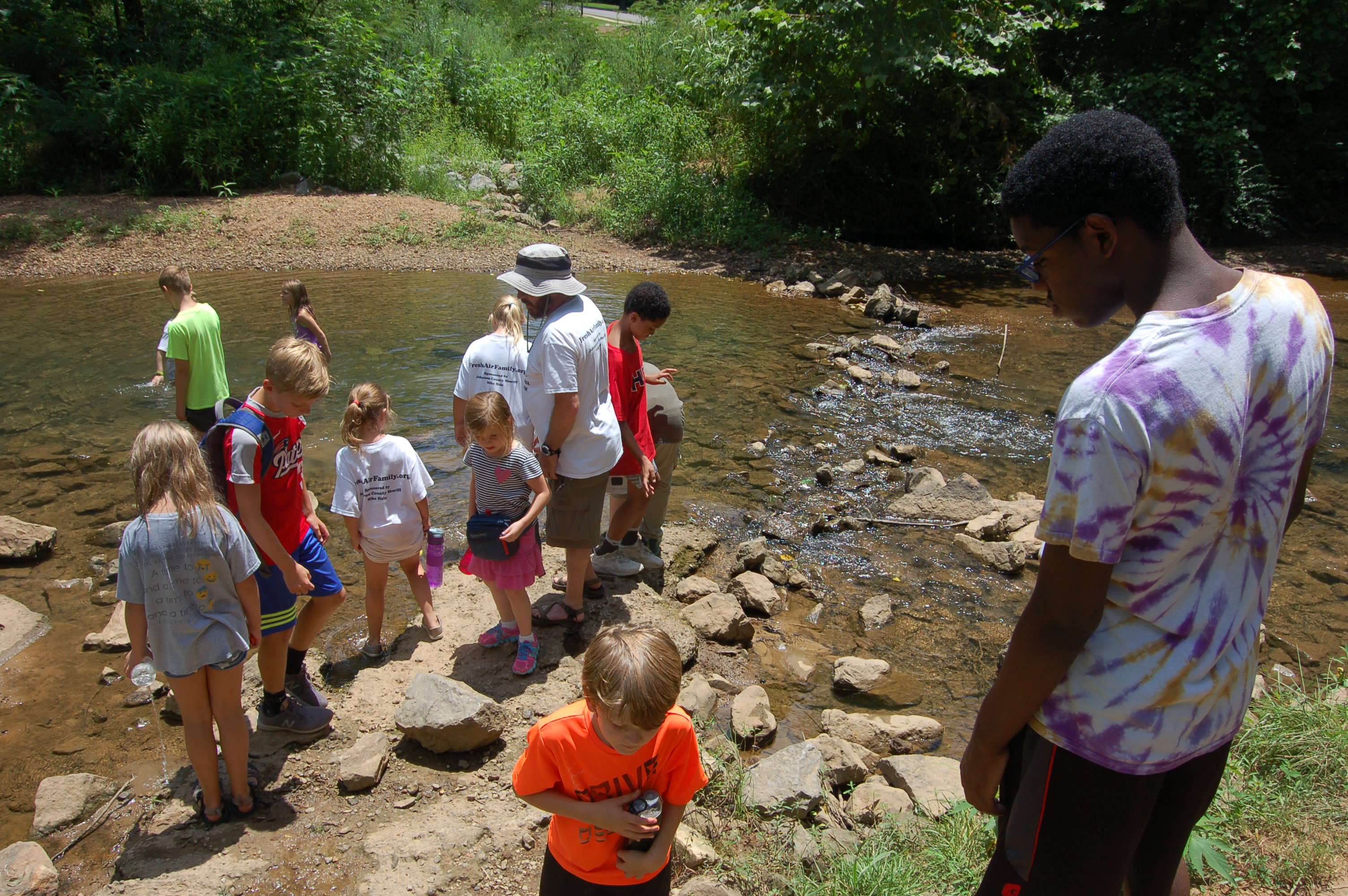 TRUSSVILLE — It was hot and it was humid, but that didn’t seem to bother Dr. Matt Brown, Verna Gates of Fresh Air Family and the kids in their camp, “Prepared Not Scared,” because getting back to nature was one of the goals in a program for fourth through sixth graders held in multiple cities, including Trussville in July. 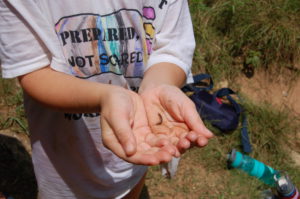 Blakey Brown, 7, holds a millipede in her hands at “Prepared Not Scared”. Photo by Nathan Prewett.

“I learned the rule of threes,” said Aiden Jackson, 11, “Three hours, three nights, three days, three weeks. And I learned that if you get lost you should always stay where you’re at. We haven’t learned about edible plants but we’re going to learn about that today.”

Sponsored by the Jefferson County Sheriff’s Office, “Prepared, Not Scared” is one of many programs by Fresh Air Family

“I want to see the children come away with confidence in themselves and the skills they learn,” said Sheriff Mike Hale. “The lessons taught through this program will serve these kids well into the future. I always look forward to the hand made cards after each season showing the appreciation and respect these kids have for their Sheriff’s Office.”

A large focus of the camp was on wilderness survival and tracking, which had a unique spin to it where the campers were taught to track Bigfoot.

“I go out on the trail and make it look like there’s Sasquatch evidence,” Brown said while the kids broke for lunch inside the Trussville Athletic Building. “And we try to track Sasquatch. I even take my shoe off and I try to make the biggest footprint I possibly can and I get them to think we might be on the trail of something.”

“The real thing we want to teach them is what to do if they get lost,” Gates added. “And so tracking is a big part of that. Did you leave something behind? Did you break a branch? You’re learning how to track and maybe find your way back. It’s not very fun to just go out and track but it’s a lot more fun to go, ‘Hey, let’s go find Bigfoot’.”

Another part of the lesson was shelter, Brown said. He taught how to seek shelter during emergency situations by using things in their environment and setting up in elevated places where they have a field of view. He implemented this with the theme of looking for Sasquatch, saying that he would be the “master” of such wilderness survival skills, which is why he’s never found.

“He’s the master of finding the perfect shelter that’s between trails,” he said. “He can see the trails. He can get away before you get to him. We teach them the basics of survival. I talk about the rule of threes where basically you have a survival situation within the first three minutes, if you make a bad decision or you don’t have your head on straight, you panic, you start freaking out, you actually make it worse.”

“So we talked about how you don’t panic, you react to the situation and you make a basic plan. Am I going to stay on the trail and walk back the way I came? Am I going to start signalling, looking for help? And then you move on to what you get done in the first three hours, which is signalling.”

“We talked about doing smoke signals, we talked about using mirrors to attract the attention of planes or helicopters. We talked about flashlights at night, whistles, all these sorts of things. And tending to first aid. It’s just going to get worse if you don’t tend to your basic first aid when sheltering.”

After that, the lesson turns to the first three days in an emergency situation, particularly with staying hydrated with filtered and purified water that’s boiled. A shelter can be set up by using sticks to build a sort of makeshift cabin or lean to that can protect oneself from the elements.

Children were taught how to find food, including kudzu, which Brown said was edible, as well as medicinal plants and plants to avoid. But getting back to the natural world and learning how to survive in it is, by far, not the only value that Brown and Gates want to instill in their campers. These lessons are valuable for most situations outside of the wilderness.

“What I want to do is inspire them to aspire to be an adult who is functional that can do stuff that doesn’t get stuck on the side of the road in a snow storm and not know how to increase the traction between the tires and the ground, make good decisions and learn as you go. Accumulate this knowledge as you go through life,” Brown said.

After lunch they filed out and walked over to the nearby Cahaba River where they basked in the waters and Brown tried to find different kinds of aquatic life there.

“I learned that you can find stuff under rocks, like millipedes and worms” Blakley Brown, 7, who was cradling a millipede in her hands as they were exploring the river. Animals are also part of the camp where Brown and Gates bring out snakes, turtles, lizards, insects and tarantulas to show to the kids.

“We bring these things to show them that you shouldn’t live in fear of nature,” he said. “We’re out in Cahaba River, Shades Creek or Ruffner. We are flipping rocks looking for living creatures to show them the biodiversity that Alabama is so blessed to have. We have all these natural resources in our back yard that we can use to teach these kids about nature and to get them outdoors.”

These days see a lot of kids and adults staying inside instead of getting out. With the advent of more sophisticated technology, kids in particular are finding themselves glued to cell phones, tablets and video games at home. Gates stressed that playing outside is natural for children where they can get exercise and learn confidence.

Gates added that the program seeks to instill critical thinking in kids. This is, she said, a key factor in educating children on how to survive, not just in the wilderness, but in the civilized world as well.

“The key is teaching critical thinking,” Gates said. “You have to think your way out of a problem. And if you can teach them to think you can really make a difference in their lives just by making the right decisions. And build self confidence. When I first learned out to forage, I realized, ‘Hey, I can survive’.”