Brothers Jon and Josh Temple will be opening a new sports bar and grill in Argo this week. BenJammin Sports Grill will hold it’s soft opening on Friday. The restaurant will remain open after the soft opening, but will have an official grand opening on Saturday, Sept. 1 for the beginning of the SEC football season.

BenJammin is named in honor of the Temple’s third brother, Benjamin, who passed away unexpectedly in 2016.

“As brothers, we have always wanted to go into some form of business together,” Co-owner Josh Temple said. “Jon and I had talked of opening a restaurant and we had talked with Ben about it, as well. It was something we hoped to do together. Ben loved sports, especially Auburn, and was very good at football. I have no doubt he would love the restaurant, especially with it being sports themed.”

Temple said that Ben’s two children will be present for BenJammin’s soft opening.

“I only wish he was here to see it,” he said. “His oldest, Bentley (6 years old), loves Auburn football, too. I know now they don’t fully understand how this restaurant is meant to honor their dad, but as they get older, I’m sure they will understand more.”

The Temple brothers grew up in Trussville and graduated from Hewitt-Trussville High School. Josh moved with his family to Argo in 2010

“Since living in Argo, we’ve always had to go to either Trussville or Springville to eat because there weren’t really any options here,” Temple said. “When this location became available, we took it as a sign that it was time to move forward with our dream of owning a business.” 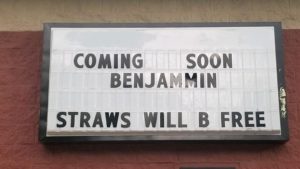 The only sports grill in the city of Argo, BenJammin will be located at 8925 Gadsden Highway.

According to Temple, several local chefs will be working in the kitchen, and the menu will mostly consist of grill staples such as hamburgers, wings and chicken fingers.

“I’m most excited about shrimp and grits,” he said. “The restaurant is sports-themed, which is something completely new to the area. We have TVs all around the main dining room that will feature college and local teams during football season. We also plan to have live music after football season.”

The restaurant will have pool tables available for guests, as well.

Temple said that his brother, Jon, has worked in the restaurant industry for nearly 15 years and has knowledge in all areas from serving to management.

While this is Josh Temple’s first venture into the restaurant business, as well as first time owning a business, he has worked in management for several years and has his B.S. in business/marketing from UAB.

“The preparation process has been very long,” he said. “We started applying for the licensing in July. We were all surprised by the amount of licensing it takes to open a restaurant and we are still in the process of obtaining a liquor license, which we hope to have in place in the next two-to-three weeks.

“Beyond the licensing, it has been trail and error finding out what table arrangements are most suitable for the space and atmosphere we’re hoping to obtain. We’ve also gone though several different menu options, but have now narrowed it down to a few key items that we think will be the most enjoyable by the people in our area.”

In addition to running the restaurant, the Temple’s have long-term goals for their business to reach out into and support the Argo community. Some of their plans include featuring local sports teams inside the restaurant, sponsoring local events and eventually acquiring a food truck to travel to local events, as well as events in surrounding communities.

“We hope to have a very successful business in the area and support local community events,” Temple said. “When a customer comes in, we want them to be able to enjoy not only their food, but a game as well. We want you to feel like it’s a place where you can relax and have a good time.”