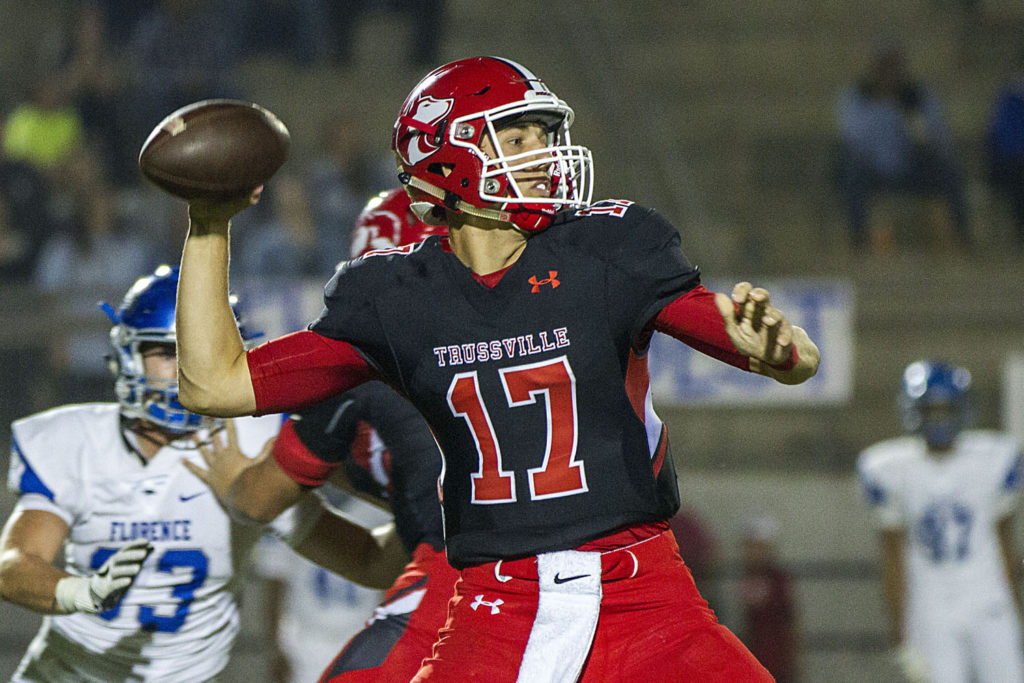 TRUSSVILLE—The buzz around the area is that the Hewitt-Trussville Huskies are ready to make themselves a championship contender and are a force to be reckoned with this upcoming fall. Head coach Josh Floyd has done what he has set out to do and that is turn Hewitt-Trussville into one of the most dominant programs in the state.

The Huskies are loaded with talent all over the field and are capable of making a run for the 7A state championship and it all starts with senior quarterback Paul Tyson.

Coming off of a season where Tyson threw for 3,392 yards and 36 touchdowns, it’s not hard to see why the hopes and expectations are so high. He is one of the nation’s top high school quarterbacks and has committed to the University of Alabama where his grandfather, Paul “Bear” Bryant coached the Crimson Tide as arguably one of the greatest coaches to ever coach the game of football.

Tyson should expect to put up similar numbers with the playmakers that could give opposing defenses fits. Junior wideout Dazalin Worsham, who is already an Alabama commit for the class of 2020 is expected to be one of the go-to guys that get the offense rolling.

Another receiver senior Ja’Varrius Johnson, an Auburn 2019 commitment, will be another key playmaker for the Husky offense.

“Those guys can make the plays when the ball is in the air and all they need is a little space and they make a 5 yard catch turn into a 50 yard catch in the blink of an eye.” Coach Floyd said.

“You can’t win ball games without good play in the trenches and those guys lead the way and take charge of the offensive line and also the team.” Floyd said.

Defensively, the Huskies are lead by junior defensive tackle Eric Taylor who is gaining attention as one of the best defensive linemen in the nation and continues to climb up in the national rankings for the class of 2020.

“Eric is a great guy on and off the field. He’s going to make you work and he’s a force to be reckoned with in the trenches.” Floyd said.

Senior defensive end/outside linebacker Tyler Antkowiak is expected to continue to make plays as he comes off of an 80 tackle season with 3 sacks. He is has proven himself to be one of the best field goal rushers in the special teams aspect of the game as well.

“He’s a guy you just love to coach. Tyler is technically sound and just gives a tremendous amount of effort and his play shows just that.” coach Floyd said.

In the secondary, all eyes will be on junior cornerback Malachi Moore. Moore has committed to the University of Alabama for the class of 2020 and looks to be the lockdown corner that gives receivers fits each week. Moore’s  confidence is what coach Floyd thinks will anchor the defense.

“Having him out there just makes our defense that much better. He doesn’t mind going against the best receiver on the opposing team, he embraces the challenge and goes out and gets the job done.”Floyd praised.

Another key piece to the Huskies secondary is senior Creed Parker. Parker plays safety and has made his fair share of open field hits that leave offensive players hesitant on going his direction.