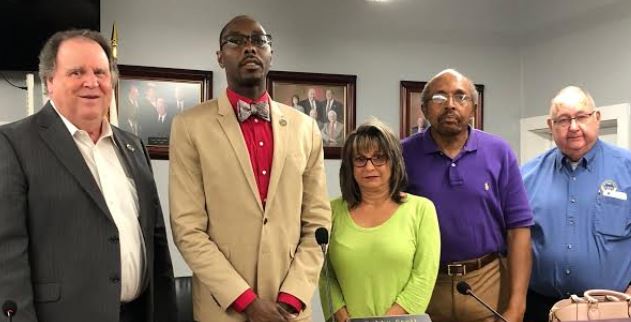 CENTER POINT — The Center Point City Council met on Thursday, August 23.  Council President Roger Barlow led the room in a call to order, invocation and a pledge of allegiance to the flag.  Afterwards a roll call was performed, and once it was confirmed that a quorum had been achieved, the council proceeded with city business which included the adoption of the agenda and approval of the minutes from August 9.

The public was invited to make comments and Tammy Fitts, of Center Point, used the opportunity to explain that several people wanted to participate in civic events but were limited in their ability to do so because the Max transportation system, which is the only method of transportation for many disabled persons in Center Point, ends its services to the city at 8 p.m. each evening.  The council promised to look into the issue and after the meeting Mayor Tom Henderson spoke with Fitts, one-on-one, concerning the matter.

New business for the session included considering bids for a replacement air conditioning system to be installed in city hall.  The old system is has become expensive to maintain and is nearly beyond repair.  Bids considered ranged from $7500 to $14000.  The council opted, unanimously, for a $7500 system from Contractors LLC which includes an air conditioning system, a heat pump and duct work.

Mayor Tom Henderson made comments to the council and the public.  He informed those in attendance that the Center Point CVS has started to sell Center Point athletic apparel.  Items in their inventory include shirts, ball-caps, and socks.  These items represent Center Point athletics from youth leagues all the way up to high school and are all in the official colors and styles.  All profits from the sale of Center Point athletica apparel will be donated to city schools.

High school football was then discussed.  Center Point will only have four home games this year and it was agreed by the council and mayor that the team will likely have a good season.

The next Council meeting is scheduled for Thursday, September 13 at 7 p.m.