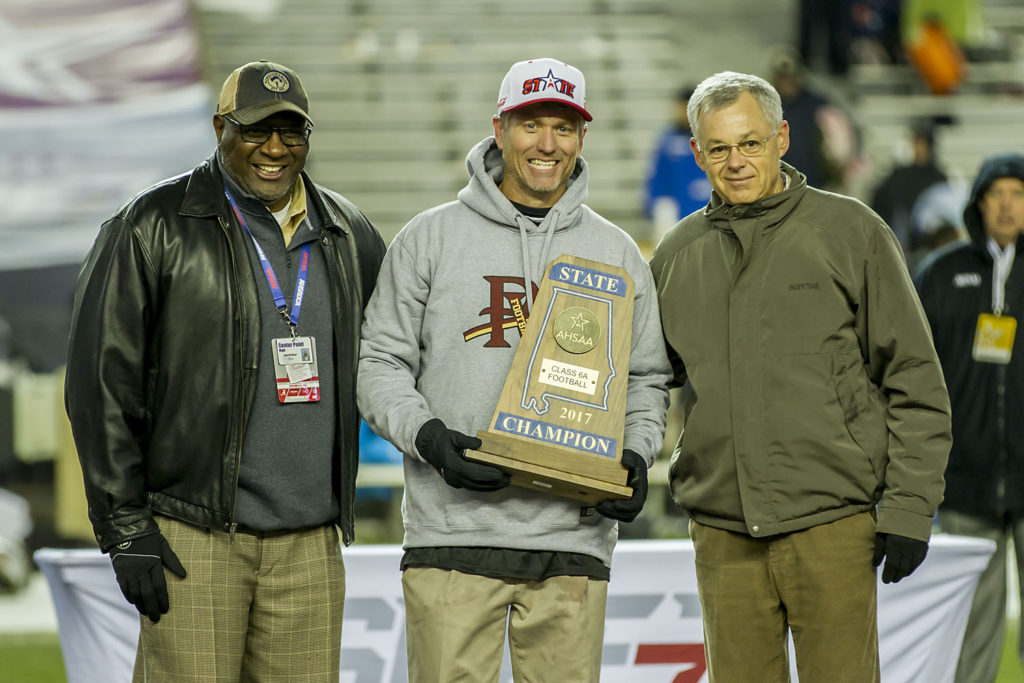 For Nix, Pinson Valley, a win over Hoover solidifies place among the giants of Alabama high school football

PINSON— When Pinson Valley takes the field against Hoover on Saturday, it will be the first time that the previous year champion from the 6A and 7A classifications will face off in Alabama high school football history. That’s just one of many firsts that could put Pinson Valley and head coach Patrick Nix in an elite class even more so than a blue map.

First, Saturday’s matchup between these two teams will be the first time they have faced each other. Both Hoover and Pinson Valley are respectively looking to repeat as champions in their classifications, Pinson Valley in 6A and Hoover in 7A. While a win or a loss doesn’t necessarily derail either team from reaching that goal, the significance of what a win would mean for Pinson Valley and Nix go far beyond a regular season win.

Before Nix took over in 2017, the Indians weren’t even a .500 program over the course of their history. A 49 percent winning percentage and two region championships in back-to-back seasons in 1998-99 were the high points of the program. Nix ushered in the programs first 10-win season, a region championship, and a 6A State championship all in his first year. With almost the entire defense and highly touted Auburn commit Bo Nix back at quarterback, the Indians are poised to repeat as they enter the 2018 season as the highest ranked 6A program by several publications. The Indians carry a 15-game winning streak into 2018 and the first test may in fact be their toughest.

Hoover rarely needs an introduction when you talk about high school football in the state of Alabama. Since 2000, the Bucs have won 11 state championships including five this decade. Head coach Josh Niblett enters his 11th season at the helm of one the greatest football programs this state has ever seen. Niblett was also just named as the head coach of the Alabama all-star team that will compete in the annual Alabama-Mississippi football game. Niblett also just became the first Alabama high school coach to win seven state titles.

Traditionally, the Bucs have opened up previous seasons against some of the biggest and most talented high school programs across the country including teams from Florida, Georgia, and Texas, the three most talent rich states when it comes to high school football. Counting regular season losses in that time for Hoover is an easy task. It doesn’t happen often. In fact, you have to go all the way back to 2005 to find the last time a Hoover team lost to an in-state program that wasn’t in their region, a 39-28 loss to Tuscaloosa County. Since making the transition from Berry to Hoover in 1994, the Bucs have never lost to an Alabama team not in their classification.

That places the stakes about as high as you can place them for the 6A defending champion Indians. Winning a state championship, or two, is one thing. To knock off the giant in your own state is another. Niblett and Hoover both have carved out a nice place in history when it comes to high school football in this state. With that comes a target and a lists of firsts for others to accomplish. Long have fans wanted to see a matchup of this caliber and though the Champions Challenge does that to some degree, long have people waited for a matchup between teams in the highest of classifications go head-to-head and now fans will get that and more come Saturday.