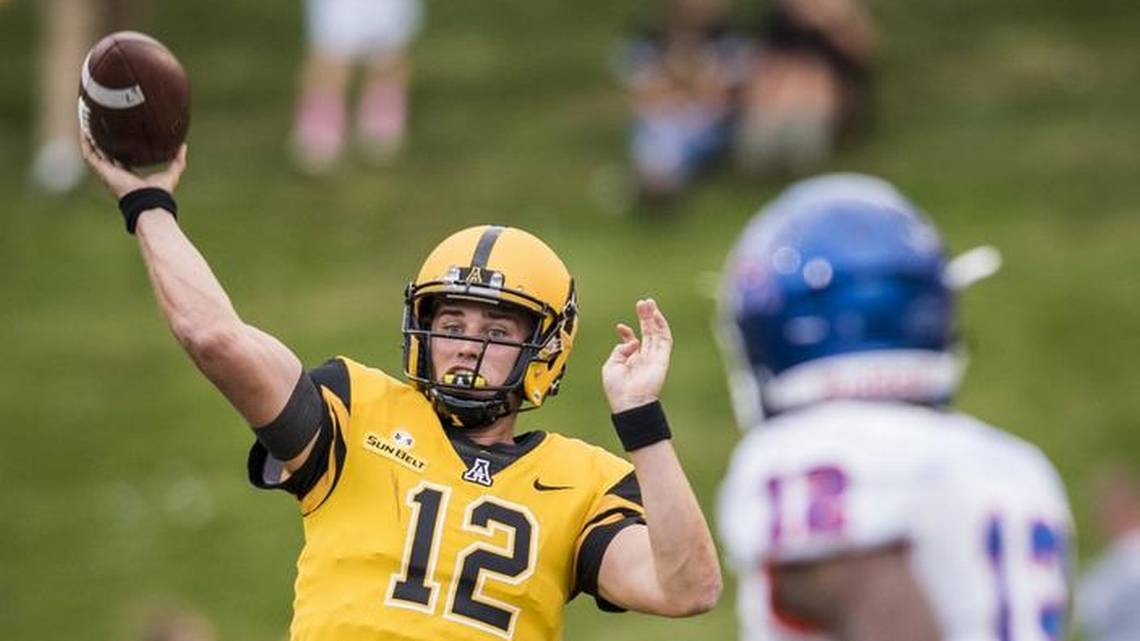 Former Hewitt-Trussville QB set to take over as starter at App. State

BOONE, N.C.— Appalachian State redshirt sophomore and former Hewitt-Trussville quarterback Zac Thomas will become the first quarterback not named Taylor Lamb to start for the Mountaineers in four years. A journey that has taken the former Husky from Trussville, Alabama to Boone, North Carolina almost lead Thomas away from Trussville.

Zac Thomas had actually considered transferring away from Hewitt-Trussville. Thomas was a sophomore for the Huskies in 2014 and something had to give. “I just felt like the program was in the same place every year. I didn’t know if this was the right place for me to allow me to reach my goals,” Thomas said. “Then athletic director Karen Johns had some conversations with me and told me they were going to bring in the right guy to turn things around. I give her a lot of credit for me staying and bringing in such a great choice in Coach Josh Floyd.”

Thomas finished up his career with impressive numbers given the fact he was injured and missed the latter part of his senior season. A 61 percent completion percentage, 3,675 yards passing, and 25 touchdowns as a three-year starter garnered the attention of plenty of schools.  Those stats, his skill set, along with some help from Coach Floyd helped Thomas reach his goal of playing college football. “Coach Floyd took me under his wing. He taught me how to practice field drills to get better and watched film with me so I could improve my game,” Thomas said. “More than anything, Coach Floyd and those coaches buy into the players. They want to get you as many looks as possible when it comes to getting you in front of college coaches and scouts,” Thomas told me.

It paid off. Thomas chose to continue his football career at Appalachian State University. For anyone that has been a fan of college football for a number of years, App State has held a reputation as a giant killer after defeating Michigan in the season opener in Ann Arbor. Since then, App State has moved from the FCS ranks into the SunBelt Conference and has slowly built off of that success. Not to say the Mountaineers didn’t have success before the Michigan game. App State claimed national championship honors in 2005, 2006, and 2007. In 2014, they made the move to the FBS level and have since won two straight conference championships while also boasting a three-year bowl win streak.

A lot of the recent success was due in part to former starting quarterback Taylor Lamb. Lamb was a four year starter who not only lead the Mountaineers to those championships and bowl games but also amassed some pretty hefty stats. Lamb completed over 60 percent of his passes, 9,763 passing yards, 90 touchdowns to only 32 interceptions in his career at App State. I asked Thomas about filling those shoes. “It’s so difficult to even think about just because Taylor set the bar so high. It’s been an absolute honor to back Taylor up for the past two years because he taught me so much. He taught me what it takes to be a leader, on and off the field, how to be a leader of the offense, and how to lead a championship team.”

On Saturday, Thomas gets his chance to begin his legacy as the Mountaineers head north to face Big Ten opponent Penn State. “It will be such a surreal moment, walking into Happy Valley,” Thomas said. “What better way to start your college career than with a win against Penn State in a place like that?” The Mountaineers, lead by Thomas, will get that chance come Saturday.

The Appalachian State vs. Penn State game will air at 2:30 p.m. (central time) on the Big Ten Network.