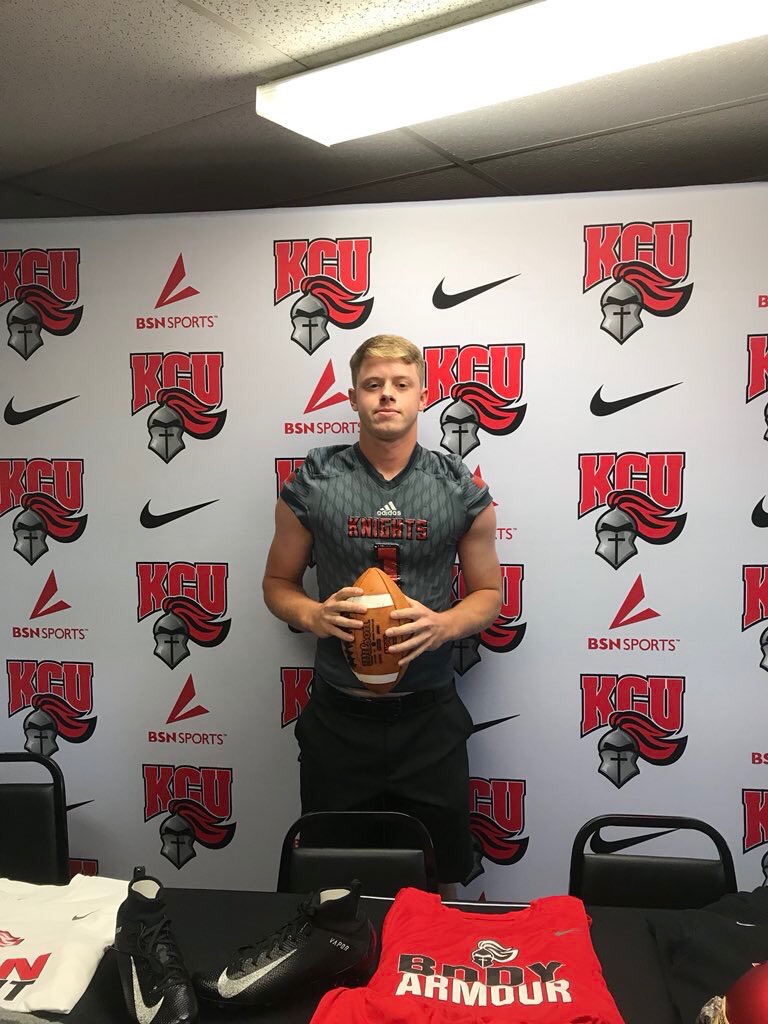 GRAYSON, KY— Davis Burgin is a 2018 graduate of Hewitt-Trussville High School and has achieved his dream of becoming a dual-sport collegiate athlete for Kentucky Christian University.

Burgin’s story is not your typical one as he has overcome some circumstances that many athletes would not be open to discuss.

As a high school freshman he was a three-sport athlete and set a goal to one day play football and baseball at the college level.

“As I continued to work towards that goal, my coaches told me that I was a top player and I believed that,” said Burgin.

In his sophomore season Burgin started the last few football games at quarterback for the Huskies and also helped lead the baseball team in their 2016 state championship winning season.

The long baseball season carried over into spring training for football during 2016 season and Burgin found himself missing valuable time at the quarterback position and practice reps leading into summer workouts.

“It set me behind while trying to compete for a starting job. I thought everything was going to be given, so I slacked off of working hard,” he said. Connor Adair became the starting quarterback for the 2016 season for the Huskies and Burgin saw his playing time dwindle.

The football team went 12-1 and Burgin felt alienated and became frustrated. As things looked as if they could not get any worse they did.

During the first week of baseball practice, Burgin suffered a severe injury to his throwing arm and his 2017 season was over before it officially started.

“I was shattered inside and I tried my best every day to hide it,” he said. “I spent nights crying and thought my dreams were done forever.”

Burgin began to lose interest in many of the things that he once enjoyed. He began to change in ways that no one had seen in him before.

“I lost a ton of weight, didn’t eat right and my mind got off of the things that happened to me,” he said. “There were days when I didn’t even want to get out of bed and didn’t want to be alive. Simple tasks like cleaning up my room and taking the trash out was a pain to do.”

Burgin was diagnosed with depression entering his senior year and was prescribed medicine to help treat it. He decided to forgo his senior year on the football field and started playing basketball after some time away from the game.

Burgin questioned his purpose in going through so many rough moments.

“God,” he said. “He was the missing piece. I was at the lowest of lows and the only way I would make it out is through Him.”

He said he spent some Friday night football nights in the gym preparing for basketball while having alone-time to focus on getting his life back together and and pursue his goal of becoming a collegiate athlete.

“It just goes to show you that God can speak to you in any shape or form at any time,” said Burgin.

Burgin got his life back on track and went on to have a successful senior season. He helped the Huskies baseball team land a spot in the state championship series, while receiving offers from colleges that would let him play football and baseball.

“I couldn’t believe it was happening,” he added. “People thought I was crazy for trying to make a comeback to football, but I never forgot the goal I set as a 14-year-old to play two sports in college.”

Burgin chose to play for Kentucky Christian University. “After my first visit there, I knew it was the perfect place for me,” he said.

Burgin is currently on the football roster and will be playing baseball next spring.

“I’m not supposed to be here in college playing two sports and living my dream,” he said. “I was a high school teenager who was depressed and at the lowest point of my life. Never give up on your dreams, no matter the circumstances. I am more than an athlete, I want to be an inspiration to those who have been done wrong, who are depressed, and are thinking about giving up on their dreams,” he said.