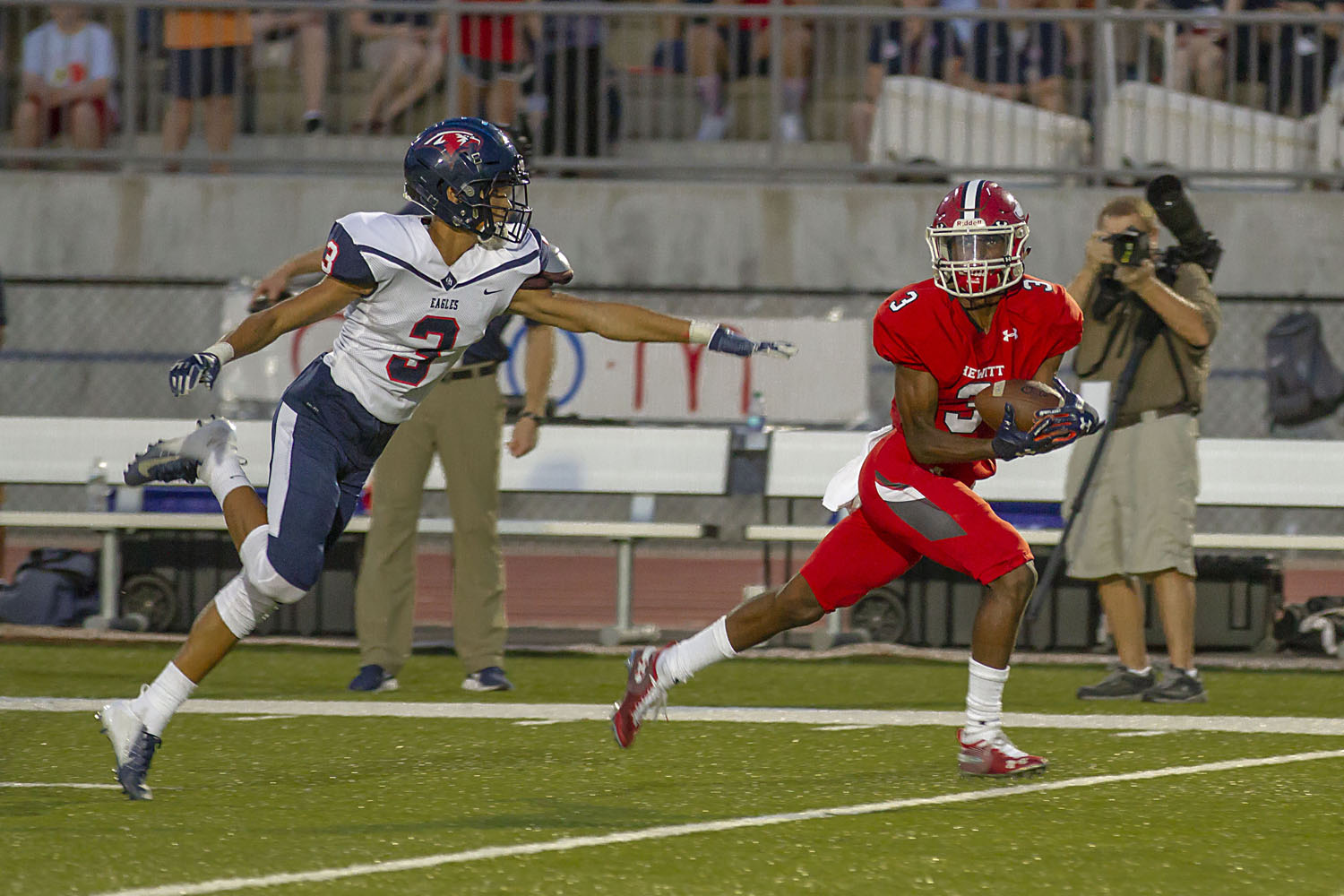 TRUSSVILLE— The scoring happened early and often in the Hewitt-Trussville 52-47 win over Oak Mountain.

The Huskies got on the board first with a one-yard touchdown run by Kameron Bledsoe making the score 7-0 with 7:50 in the first quarter.

The Eagles answered right back with a 79-yard touchdown run by quarterback Evan Smith to tie the game, but not for long. The first play of the next drive by the Huskies, Paul Tyson found Ja’Varrius Johnson for a 66 yard touchdown pass and took the 14-7 lead with 6:34 left in the first quarter.

The Huskies increased their lead after a 58-yard touchdown run by Armoni Goodwin that made the score 21-7 at the end of the quarter.

In the second quarter, Tyson found Dazalin Worsham for a four-yard touchdown pass to take a 28-7 lead. The Huskies looked to have the momentum, but that feeling changed.

Later in the quarter, the Eagles got in the end zone after a one-yard run by Luke Percer. A missed extra point made the score 28-13 with 3:53 left in the half.

On the next possession for the Huskies, Tyson threw an interception to Zay Brown of the Eagles and was stopped right outside of the goal line. The Eagles scored the next play from one yard out to trim the lead 28-20 with 2:21 left in the first half.

Parker Colburn added a last-second field goal to give the Huskies a 31-20 lead at halftime.

The opening drive for the Eagles led to an 11-yard touchdown run by Percer. The two-point conversion attempt was unsuccessful which made the score 31-26 with 7:20 left in the third.

The Huskies did find the end zone on their next possession as Tyson ran in from one yard out to increase their lead to 38-26.

The kickoff after the Huskies score was returned for a 92-yard touchdown by Percer and a successful extra point attempt made the score 38-33 in favor of the Huskies.

Tyson connected with Johnson again for a 50-yard touchdown pass and catch at the 2:23 mark in the third to give the Huskies a 45-33 lead heading into the fourth quarter.

Oak Mountain scored a touchdown at the 11:53 mark in the fourth quarter on a run by Percer making the score 45-40.

The Eagles answered with a 26-yard touchdown run by Percer making the score 52-47 with less than 4 minutes in the game.

The Huskies gained possession and drove down into the red zone and looked to put the game away with a touchdown, but a fumble by Tyson at the one-yard line was recovered by the Eagles with 34 seconds left in the game.

The Eagles had to muster up a drive 99 yards but was unsuccessful and was thwarted on the last play of the game by the Huskies defense.

Tyson finished the game 19 for 30 with 347 and three passing touchdowns and two rushing. Armoni Goodwin finished with 113 yards on 14 carries and a touchdown.