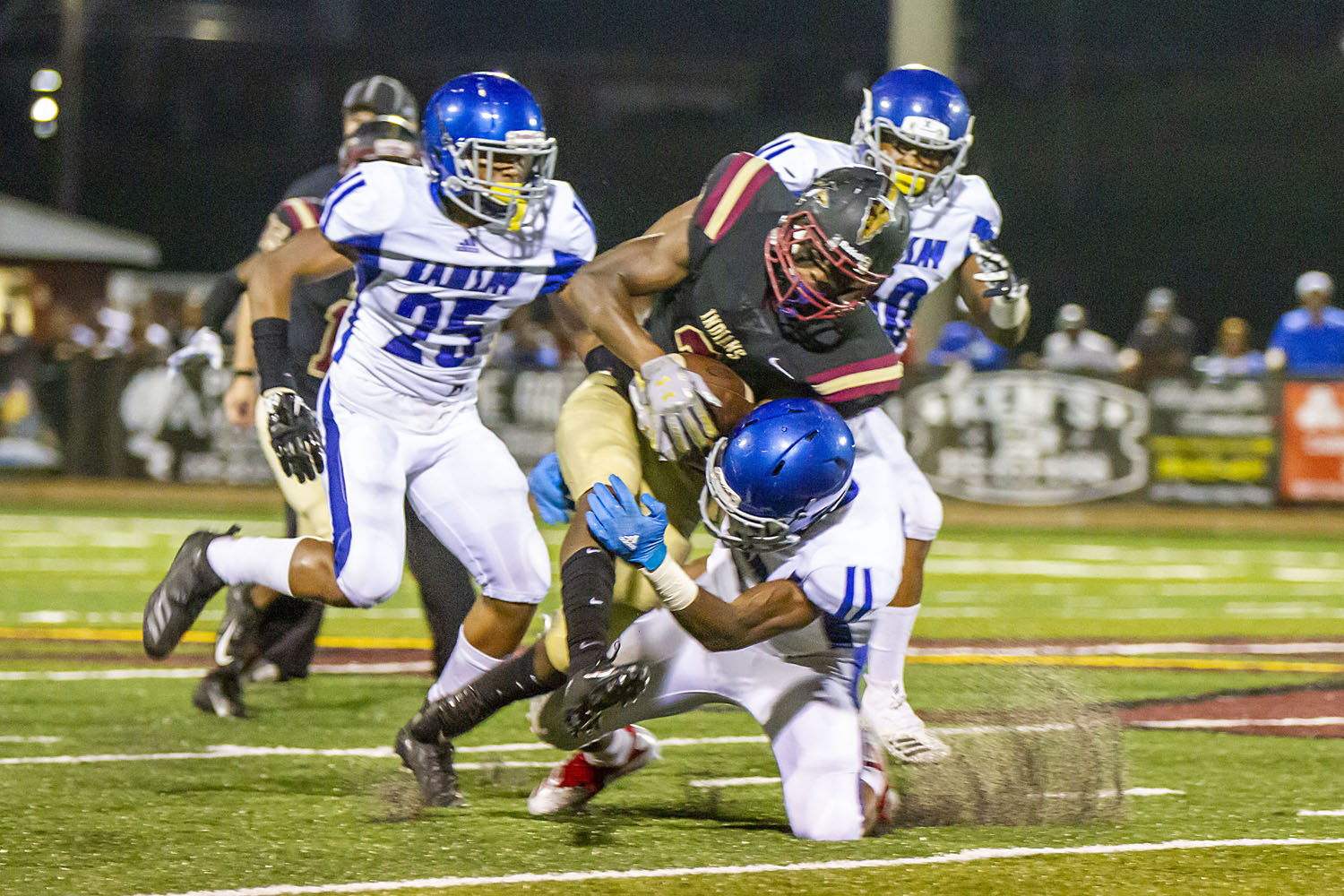 IRONDALE—The Indians began region play on the road Friday night as they held Shades Valley to a single touchdown late in the fourth quarter, defeating the Mounties 49-7.

Quarterback Bo Nix and his receiving corps had their best night of the season as Nix was 17-of-29 for 300 yards and five touchdowns. Demarion Holloman was on the receiving end of the bulk of the load as Holloman caught five receptions for 100 yards and three touchdowns.

The Indians jumped out to a 21-0 lead in the first quarter as Nix completed a seven-yard pass to Tye Pouncey to get the scoring started. Running back Mike Sharp added a three-yard rushing touchdown later in the quarter to give the Indians a 14-0 lead. Sharp ended his night with 86 yards on 16 carries and two touchdowns on the night.

The third drive of the night for the Indians was a two-play scoring drive as Nix hit Geordon Pollard on a 20-yard pass to set up first and ten on the Mounties 36-yard line. Nix then hit Demarion Holloman on a 36-yard touchdown throw to give the Indians a 21-0 lead at the end of one.

The Indians held the Mounties from crossing midfield until late in the second quarter and it would have held up if not for a roughing the passer play that negated an Indians interception. Defensively, Rhassan Christian lead all tacklers with seven tackles, a half a sack, and two tackles for loss. Dorian Henderson, James Perkins, and Gabe Hamby also added sacks on the night. As a unit, the Indians held Shades Valley to just 225 yards of total offense on 56 plays.

When asked about his defense playing well this week, Head Coach Patrick Nix said: “The guys have not played overly well the first week, then they got better the second week, got better this week so this is a relatively young group that just keeps getting better.”

The Mounties did have some success on the ground as they rushed for 167 yards on 33 carries while backup quarterback Isaac Sims connected with Isaiah Sims at the end of the fourth quarter on a 28-yard touchdown pass to put Shades Valley on the board. Running back Antonio Williams carried the ball 15 times for 103 yards for the Mounties to lead all runners for the game.

Nix also talked about the passing game and the receivers taking advantage of their opportunities:

“We had more opportunity tonight in the passing game than we have in the last couple of weeks. Receivers made some really good plays and the offensive line did a really nice job of blocking that gave us the opportunity to do it. This is a good receiving corps and sometimes one guy just happens to get more opportunities based on the coverage and the situation.”

The Indians finished the night with 417 yards of total offense on 51 plays. Pinson rushed 21 times on the night for 117 yards, averaging better than 5.6 yards per carry. As for the region, the Indians get a much-needed win before they take on 3-0 Clay-Chalkville at home next week. The Cougars will be out for revenge as they lost to the Indians last year 34-32 in a game that ended up being the deciding factor for the region champ.