Trussville — Trussville has always had a certain appeal. Since the town was incorporated in 1947, the city’s growth has been expected due to its aura of a quiet place of living at a slower pace.

At the center of this existence lies the Cahaba Homestead Village Historic District built in the late 1930s part of President Franklin Roosevelt’s administration to build the country’s infrastructure and employ Americans without jobs and homes during the Great Depression.

The historic district, believed to be one of the largest and oldest Works Progress Administration (WPA) projects still intact in the United States, is of both local and national significance. During a time when the country was torn apart by the Great Depression, the project’s construction alleviated the American spirit.

This shared past is now endangered of being lost forever – one bulldozer at a time.

As a city steeped in history, visitors will not only stumble upon countless landmarks and architecture of the 20th century but will experience a small town living at its best.

While entering the city off North Chalkville Road, one would expect someone at any minute to shout, ‘action!’ and see actors singing a theme song in the windows of the historic homes that line the road. The North and South Mall filled with families throwing frisbees, people strolling along the sidewalks near the library, and parents walking their children to school along with their dog portrays an image of a place that anyone would love to call home.

Nostalgia is the reason. Trussville is a place where a vanishing lifestyle still exists; a place etched as a reminder of shared history – past and presence. Times depicted in an old Norman Rockwell picture, where the filling station cashier knows your name, where your teacher graduated with your father, and where generations of students walked the halls of the town’s historic school buildings. A place where not only every resident has a story to share about what the community was and how it began, but also where the preservation of these stories still embodies the city’s culture and community.

The gazebo at Civitan Park
file photo by Ron Burkett

Trussville living conveys distinct attributes that include history and traditions which inhabitants hold dear. There’s a reason behind the slogan, “Trussville is the Gateway to Happy Living”. For its values, its roots, and its evolution are cherished as a warm, friendly and a wholesome refuge that makes it a place to call home.

Over the past 80 years, the Cahaba Project has lost six homes – four by fire and two by demolition. Now the district is set to lose another home to demolition – third within the last 18 months.

The question some Trussville residents are asking, Cahaba Homestead Village Project homeowners specifically, is should the history be destroyed or preserved?

Trussville Councilman and Cahaba Project homeowner, Zack Steele, has sparked an ongoing discussion when addressing his fellow councilmen how shocked he was by the growing number of demolitions being permitted in the project.

“The Cahaba Projects have seen two demolitions within 18 months and now a third demolition permit has been requested,” said Steele. “We have to do something in order to preserve the history of this district.”

Along with Steele, several Cahaba homeowners have been wrestling with a way to preserve the community within the established historic boundaries noted in the National Reserve.

“Concerned neighbors have asked for safeguards of the neighborhood to preserve a district that is on the National Register and is the centerpiece of our city,” said Steele. “I agree with these folks that it is worth doing all we can to preserve the heritage of this neighborhood.”

To this end, Steele has been investigating solutions to preserve the district from future demolitions.

Of paramount importance to the Cahaba Homestead Village Project homeowners is the preservation of homes inside the historic district that was constructed in 1938 during President Franklin Roosevelt’s administration who established the Resettlement Administration and WPA projects under the New Deal.

By strengthening the review process necessary before a demolition permit can be issued by the city’s building inspection department, Steele hopes for a solution to forestall demolitions of historic significance and assist with preservation during the neighborhood’s renovations.

According to Steele, the process of a demolition requires a demolition permit from the city which cost $100 and is approved through the building inspection department.

“There is currently no oversight nor environmental provisions needed to request demolitions from the city,” said Steele.

Spotlighting the 18-month disturbing trend of demolitions, Steele speaks on behalf of the district’s growing concern.

“I have heard from many of my neighbors about their discontent in regard to the demolition of homes listed in the National Registry,” said Steele. “Unfortunately, as a city, we really don’t have a policy on this issue. The recent permit request for demolition will be the third permit requesting a demolition in the historic district within the last 18 months. If we do care about preserving the city’s history, we need to develop a policy.”

In February 2017, at the request of Steele and many Cahaba homeowners, the Trussville Council passed, through a unanimous vote, a resolution to place a moratorium on all external demolition of any home inside the project area.

The goal of this moratorium was to prevent any demolition for 90 days. In addition to the moratorium, the Council hoped to devise a plan to create a policy for future home renovations while maintaining the preservation and architectural integrity of the historic district.  Although the Council could have extended the time for an additional 90-day period, the moratorium expired with no changes to the demolition process.

Some may ask this question, “Why the need for preservation?”

Eighty years ago, before the sunshine scattered in speckled shadows from the tall oak trees on North Chalkville Road, there were remnants of an industrial past. An old Trussville Furnace, slag-heap (hill from a mine) piles covering the land and a poverty-stricken town searching for a new hope and a new way of life.

During the Great Depression, President Roosevelt sought help from the federal government to provide housing for struggling families who had lost their homes. His solution was the New Deal that established the Resettlement Administration which created government housing projects, such as the Cahaba Homestead Village Project, to not only provide housing for struggling families but through its construction would provide work for both skilled and unskilled labor. 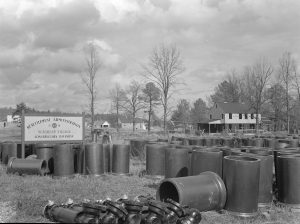 In 1938, a construction project began for the Cahaba Homestead Village (previously known as Slag-heap Village) created from a $2.7 million budget comprised of wages for a project architect foreman, semi-skilled and unskilled laborers that encompassed every area of construction on more than 615 acres of land.

By 1939, the Cahaba population consisted of 219 families with 61 homes still vacant. Out of the three Birmingham area projects established under Roosevelt’s New Deal, the Cahaba project became most desirable due to the community’s established high school, railroad, and bus-line that provided transportation for commuters to and from downtown Birmingham. Many applications were turned away due to an overwhelming interest in the project homes.

Before long the community flourished into a garden community helping to alleviate food shortage bringing cohesiveness to surrounding communities. Cahaba residents purchased their homes from the federal government after government disposal in 1947 became a part of Trussville’s city limits.

The Cahaba Project’s 287 massed-planned cottage garden community is contained within the boundaries of Brentwood Avenue and runs into Rockridge Avenue, Poplar Street, and Parkway Drive. Its historic preservation was recorded on the National Register of Historic Places in 2006 primarily because of its significance in President Roosevelt’s federal reform and relief programs after the Great Depression.

Many of the houses dating back to September 1938 still line the streets and are mostly fully intact, largely due to the preservation and restoration efforts of their historically minded owners.

Although there aren’t protections through the federal listing, indirect protections are possible through state and local regulations on these properties and tax incentives are available. One protective remedy Steele shared with the Council during last month’s workshop is the establishment of a Historic Preservation Commission that gives authority to designate and provide protection to historic properties within the municipality.

“The establishment of this commission would look at landmarks and districts within the city that fall under items of historical preservation,” said Steele. “This includes landmarks and neighborhoods such as the Cahaba Project.” He shared that other municipalities have already established these commissions through a similar ordinance in communities like Avondale.

The framework, Steele adds, has already been laid out. 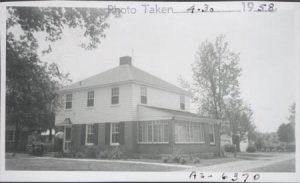 “Since we have a neighborhood that is listed on the National Register, some of these steps listed in the Alabama Historical Commission’s model ordinance have already been performed including surveying of the properties.”

The controversial establishment of regulations to protect and preserve the historic district was brought to the attention of many homeowners of the Cahaba Project.

Only a couple of residents gave rise to the trending issue of demolitions, but one resident’s remarks to the Council spoke volumes.

“We believe that the homeowners who desire preservation do not have unrealistic expectations of what it means to maintain our homes and be respectful to the neighborhood,” said Brannon Dawkins at a recent city council workshop, “We are not against big homes or modern homes. We just want to be responsible for the style and integrity of the neighborhood. We want to accommodate original and new home designs so lack of demolitions is important.”

These expectations, Dawkins shares, are based on similar areas in the Birmingham metro area that are protected.

While the opposition to preservation stems from owners who are resisting restrictions on private property, Steele emphasizes that regulations will ultimately protect the integrity and preservation of the district is key.