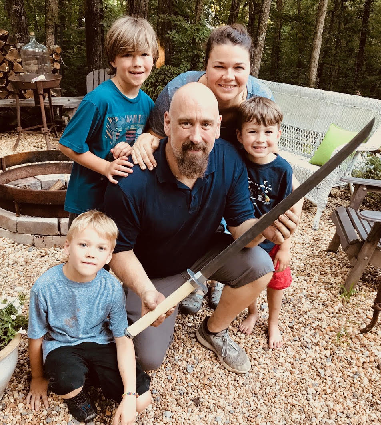 TRUSSVILLE — A bladesmith from Trussville was featured on Wednesday night’s episode of Forged in Fire.

Related story: Trussville bladesmith to be featured on History Chanel’s “Forged in Fire” 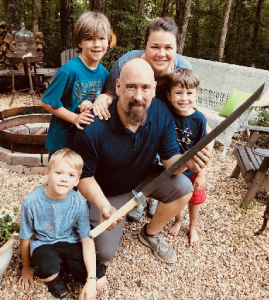 The History Chanel Program showcases, according to the program’s website, “world-class bladesmiths competing to create history’s most iconic edged weapons,” with, “four of the nation’s finest bladesmiths,” coming,  “together to put their skill and reputations on the line, trying to avoid elimination and win the $10,000 prize.”

The show is broken down into three rounds with an elimination coming at the end of each one.

Of the first round of competition Mike Deibert said, “The show started off with four bladesmiths competing to forge and assemble a “Rambo” style survival knife.  We were given a forge, anvil, some tools and a 2 inch round bar of carbon steel.  We had three hours to complete the forging and hardening of the blade. I loved this part of the challenge; something about making this weapon made sense to me.  At this point in the competition, I had a deep sense of peace from God, that this was where I was supposed to be and what I was supposed to be doing.  After the first three-hour challenge was complete, one blade smith was eliminated from the competition.”

Having survived the first challenge Deibert moved on to the second one, “In round two we were given three hours to put a guard, handle and pommel on the knife.  Making handles is one of my specialties.  I enjoy making a handle that will feel really strong in the hand.  I felt confident in the process of making the handle, but the testing definitely tested my nerves!  When the second sets of three hours were complete, the judges tested the three remaining weapons by cutting through wooden stakes.  I was extremely grateful to make it through to the final round after the series of tests.”

Having made the cut he advanced to the third, and final, round Deibert was assigned the most difficult task he would have in the competition.  He was expected to create a Hattori Hanzo Katana made from 1000 layers of Damascus steel. That is the very sword that was featured in the film Kill Bill.  Deibert only have five days to create one.

After building the sword it was then put through a series of tests.  The first required it to be tested on a ballistic dummy.  It passed the test and through the ballistic dummy.

The second test was to establish the sharpness of the blade.  To determine this the sword was swung through a number of rolled tatami mats.  As Deibert said of the test, “Again my sword performed very well and cut through the tatami mats like a hot knife through butter.”

By this point there was was only one other competitor.  However, during the testing phase his blade received some damage and he was not able to continue in the competition.  As the last man standing, Mike Deibert is your Forged in Fire champion.

Deibert said of his experience, “The entire experience was challenging, fun, and humbling.  The contestants who competed against me were great guys and talented craftsmen.  I had to use every bit of knowledge and experience that I have gleaned over the last 15 years to create this weapon.  Many people have taught me this craft along the way and this is just as much their victory as it is mine; not to mention a victory for my wife, who cared for our five children while I was off on this adventure!”